Total War: Three Kingdoms is practically overflowing with characters, so it’s pretty handy that you can steal most of them if you know how. It’s as if Creative Assembly put their character jug on the table and started pouring characters into it, and when it was full, they just kept pouring more and more characters until the room was ankle-deep with diplomats, soldiers, and warlords. Good thing you brought a spare jar, huh?

The good thing about the sheer number of characters Three Kingdoms offers is that you’re going to find a lot that appeal to your and your chosen faction. If you’re playing Gongsun Zan, for example, you’re going to gravitate towards the more military-minded personalities. Cao Cao, on the other hand, makes a good fit for the diplomatic folks in the pool.

The drawback to all this variety, though, is that the best avenue to pursue your target is not always obvious. From conquest to savvy diplomatic navigation, there are a number of ways to grab enemy characters for yourself. Three Kingdoms encourages experimentation that way – in fact, trial and error is a big part of the Total War experience. That doesn’t mean you have to go in blind, though. Here are some tips to make sure your pursuit of the ultimate retinue goes smoothly.

Best them in battle

The most obvious way to bring a new character under your banner is to beat them on the battlefield. It’s not 100% certain that defeat will result in their allegiance, but you can improve the chances by equipping certain mounts and ancillaries. Once a battle with a recruitable character is complete – and the stars are aligned just so – you’ll be presented with the “Character Captured” window, where you can choose to employ them, release them, or straight up execute them. 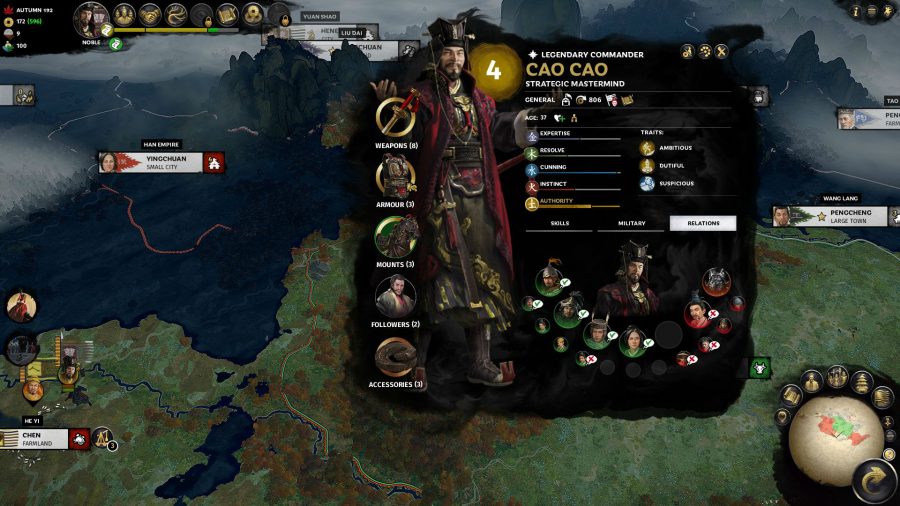 Change their hearts and minds

Three Kingdoms’ robust Undercover Network system lets you deploy spies to the courts of enemy factions. Doing so allows you to manipulate that faction in a number of ways depending on how long your spy has been sub-rosa. This is a particularly sneaky way to bring a new character into your army.

Perhaps you fancy yourself a diplomatic mastermind, and want to manipulate opposing factions like clay. This is an equally viable route to increasing the number of characters you can recruit. Earning the ability to confederate a faction’s assets and lands into your own means you’ll also gain all of their characters. Be careful, though, because your new stewards may not appreciate being stolen, and they just may abandon your army. 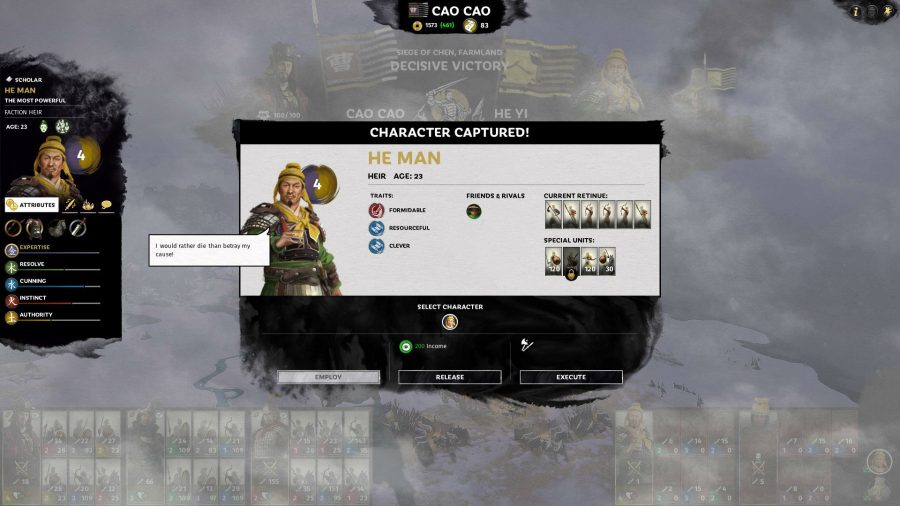 In ancient China, political marriages were a common way of establishing alliances, and Three Kingdoms is true to the practice. Not only is this an easy way to improve your relations with an opposing faction, it’s also a great way to snag that character you’ve had your eye on. Want to bring a general under Wang Lang’s banner into your faction? Offer to have them marry a member of your court and your retinue will have grown by one. This method is obviously dependent on faction relations and which characters you already have in your court, but it’s nonetheless a reliable way to grow your army.

Related: Here’s how to play as Lü Bu in Total War Three Kingdoms

Like Pokemon, the robust pool of characters in Total War: Three Kingdoms will have you itching to catch ‘em all. Luckily, the game provides you several avenues to do just that. Use these tips and soon you’ll have assembled a veritable team of Eastern Han Dynasty-era Avengers.