Wondering how to play as the legendary Lü Bu in Total War: Three Kingdoms? Creative Assembly’s latest historical outing is filled to the brim with important military and political figures from Eastern Han Dynasty-era China, such as Cao Cao the strategist, Gongsun Zan the ironfist general, and Zheng Jiang the bandit queen. Also on the roster is the ‘Flying General’ Lü Bu, one of the fiercest warriors during one of China’s most volatile periods.

Like his historical counterpart, Lü Bu in Three Kingdoms is a beast on the battlefield that is capable of turning the tide in his army’s favor. His Smouldering Fury ability allows him to get stronger as more and more enemy units oppose him, and he can shake the morale of opposing troops with his Dragon’s Gaze ability. He also comes equipped with a legendary trident halberd that stands as one of the strongest weapons in the game.

Adding Lü Bu to your army can be a bit tricky, though, since he’s not immediately available in the pool of recruitable characters during campaign mode. However, there are a pair of reliable ways to snatch him up and significantly bolster your army’s power.

How to unlock Lü Bu in Total War: Three Kingdoms

The first way to find and recruit Lü Bu is to defeat Dong Zhou the tyrant’s faction during any of the playable heroes’ story campaigns. With his leader out of the picture, Lü Bu will appear in the pool of recruitable characters. That doesn’t mean he’ll join your army right away, however; you’ll need to be on friendly enough terms that he’ll at least entertain the idea. An easy way to ensure a shot at negotiating with Lü Bu is to make yourself friendly to mutual factions and characters. Once Dong Zhou is out of the picture, look for Lü Bu in the character section and check who you’re both friendly with. Use diplomacy to nurture that relationship and he’s sure to jump on board.

The second, and most reliable way to get Lü Bu into your army is to simply play as him yourself! As Dong Zhou’s right-hand-man and adopted son, Lü Bu figures heavily into his story. In real life, disagreements with Dong Zhou’s diplomatic policies led Lü Bu to betray and execute his adopted father. He then served as a general under Dong Zhou’s successor Emperor Xian. 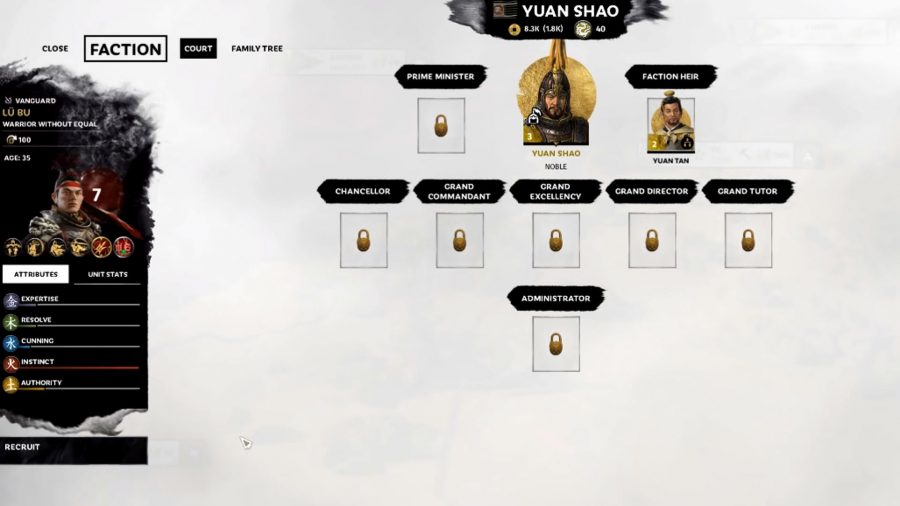 Dong Zhou’s story in Total War: Three Kingdoms unfolds in much the same way. Early on in his campaign, he is betrayed by Lü Bu, who then takes over as the playable hero for the remainder of the story. Dong Zhou’s campaign isn’t playable from the get-go, however, and is only unlocked by reaching the rank of Emperor with any other character.

Lü Bu is very much worth pursuing in Total War: Three Kingdoms. Invaluable on the battlefield, he can be the deciding factor between victory or defeat. Any army will benefit from his abilities. Level him up a bit and equip him with the proper gear and he’ll become nigh unstoppable.