So far, Three Kingdoms’ DLC packs have been hit-and-miss. The Yellow Turbans were a fantastic addition to the campaign, but Eight Princes felt lacklustre – a reminder of the difficulties of fitting a standalone campaign reskin into a single piece of DLC. But while playing Mandate of Heaven it becomes obvious that Creative Assembly has not only hit its stride, but also found an elegant solution.

The year is 182CE and those pesky eunuchs are at it again. Under their guidance, the Han Dynasty has grown bloated, bureaucratic and corrupt. The inconstant Emperor Liu Hong takes his ease in Luoyang, blind to the famine and disaster which besets China’s people. In the north, the three Zhang brothers rally those same people to form the aforementioned Yellow Turbans, with the aim of toppling the Han and ending the turmoil which engulfs the country. Meanwhile many familiar faces spy an opportunity to make a name for themselves: magistrate Cao Cao, pirate hunter Sun Jian, and honourable shoe-seller Liu Bei. These humble origins reflect the new timeline mechanic which Mandate of Heaven introduces to Three Kingdoms, meaning that players can now choose their character’s start position based upon date.

Liu Bei, Cao Cao, and Sun Jian, as well as a far thinner Dong Zhuo, are all playable Warlords in Mandate of Heaven, in which their campaigns reflect their rise to fame as they complete missions based upon their backstory. But the really cool thing is that you can carry their progress through into the Three Kingdom’s period, as well. You might spot some other familiar faces too, including Yuan Shao and Kong Rong.

Mandate of Heaven’s most significant additions are the new Yellow Turban and Imperial campaigns, which are polar opposites. The Zhang Brothers are all about cooperation, reflecting the ideals of their movement, and so share objectives and Zeal, their unique resource. Zeal is increased by leaning into each brother’s playstyle, namely attack Zhang, defence Zhang, and healer Zhang. But while increased Zeal will grant all sorts of buffs, low Zeal will mean counter-insurgency and Han loyalists popping up in your provinces. They also have Fervour, which is a bit like Vampiric Corruption from Total War: Warhammer but for Yellow Turbans. It accumulates in enemy provinces, based on characters and buildings, and causes further Yellow Turban uprisings to occur. 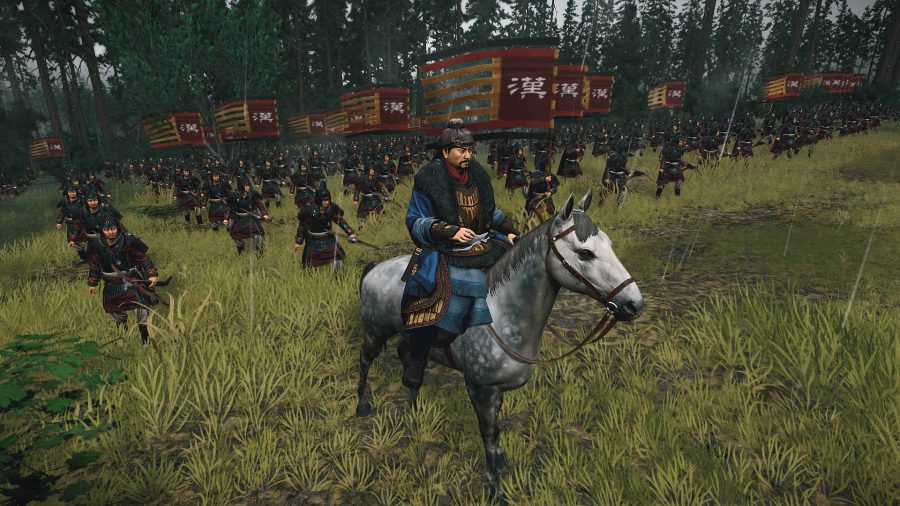 The counterpoint is Emperor Liu Hong’s campaign, which is all about consolidating individual power. He starts with one giant city, one massive treasury, and one absurdly good army, but each of these inflict their own setbacks – the city is in a state of famine and everything is expensive to build, your treasury is bleeding money, and the Imperial Army is monumentally difficult to replenish. On top of this you have the Imperial Court to deal with; an ungainly mess of bureaucracy, corruption, exorbitant salaries, and unnecessary positions.

Liu Hong’s unique currency, Influence, is how you put it to rights. Your task as Emperor is to rebalance the court between its three factions: the Bureaucrats (Eunuchs), the Dynasts (your family), and the Warlords (those coalition fellas). Each faction’s level of influence in the court grants different effects so that, as you redistribute power, those campaign setbacks will start to feel a lot kinder. The name of the game is making it work before someone else makes it work for you.

It’s a fantastic campaign and will feel like a dream to anyone who enjoys the nitty-gritty of Empire management. The Yellow Turbans are also now recontextualised – while the original faction pack felt disconnected, like the tail end of a revolution, this campaign is right in the thick of it. 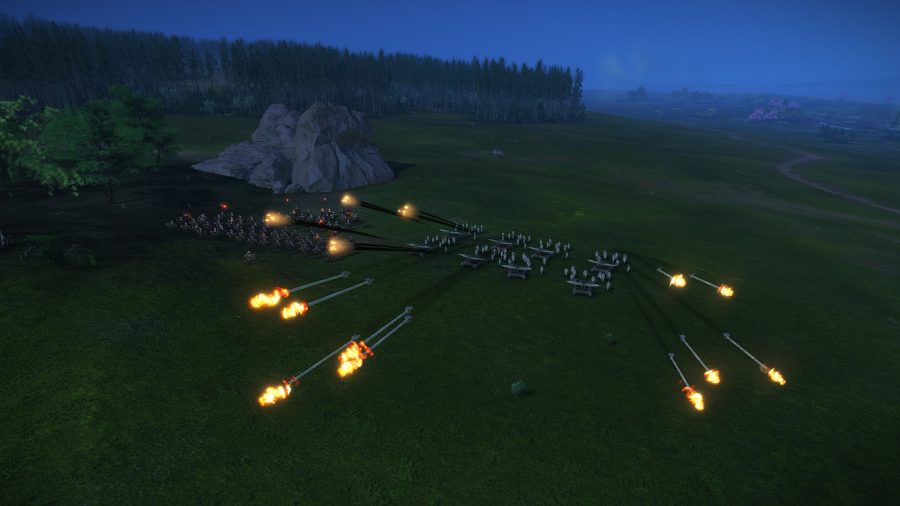 You’ll have to balance being quiet with making gains, but when the Mandate War actually kicks off, it feels like a full-scale rebellion as uprisings pop up all over the country and the full force of the Han is wagered against you. If doomstacks be what ye crave, make sure to play Zhang Liang’s campaign first.

One of my favourite additions in Mandate of Heaven is the Imperial Army. Led by He Jin, half-brother to Empress He, they are the most formidable fighting force I’ve seen in Three Kingdoms. The Imperial Palace Cavalry in particular is a hellish unit - fast moving crossbow skirmishers who can double as heavy cavalry.

In addition to the main campaigns are Prince Liu Chong, who can gain buff-conferring trophies for completing goals (also, seriously: watch out for his crossbow), and Lu Zhi, a strategist with a civic-focused version of Chong’s trophy mechanic, The Great Library. Prince Chong also has a later start position alongside Three Kingdoms’ original characters, making him a little more versatile.

Down in the weeds there are new unit types – of particular note are The Tyrant Slayers, a much-needed cavalry contingent focused on killing heroes. There are new siege options, too, including the heavy crossbow – which is a bit like the Eagle Claw Bolt Thrower from Total War: Warhammer II in that it fires multiple projectiles at once – and the long-overdue siege tower. Then there are the battlefield deployables: oil pits to light on fire, caltrops that your troops can throw, stakes to dissuade cavalry, and towers to wear down the enemy. The best thing about these deployables is that, on more than one occasion, I actually saw the enemy AI use them properly and actively try to avoid mine. 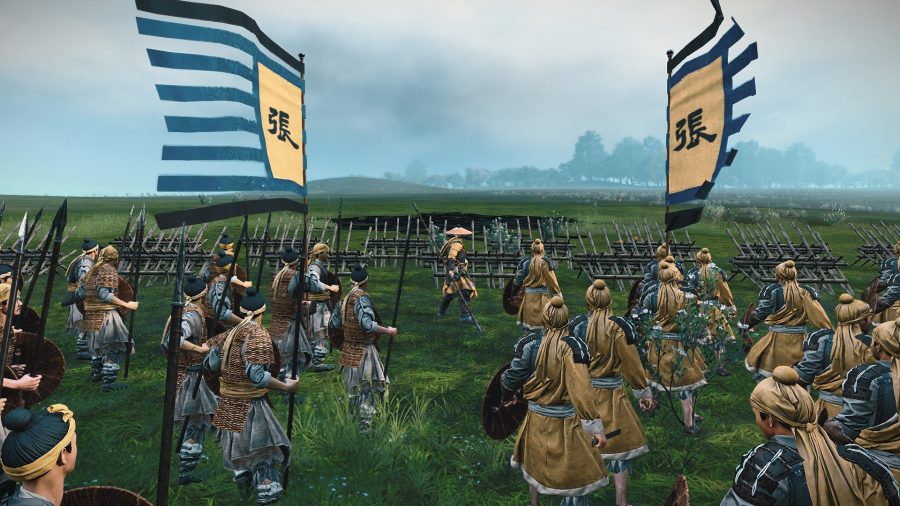 All good stuff, but I do have a few gripes with Mandate of Heaven. The Yellow Turbans, despite their improvements, are still unable to engage in diplomacy or subterfuge, which limits their faction. The period between 182CE and 190CE (when Three Kingdoms started previously) can feel quite short, as well – in none of my playthroughs were the Yellow Turbans eliminated before that date. And while the timeline is an amazing addition, and I hope it will continue to be worked on and implemented, it does currently mean that you sometimes get campaign narrative events that no longer make sense. It’s far from disastrous, but some players may find this aspect distracting.

Plan ahead: The best strategy games on PC

However, these are negligible misgivings when considered in the context of the new flavourful faction mechanics, battlefield additions, and the potential of the timeline system. The latter solves a design issue Total War has had for years (one which can be seen in Age of Charlemagne, Imperator Augustus, and Empire Divided): how to create standalone campaigns for DLC that don’t require an entire reskin.

The new time-based start positions mean those campaigns can now be part of the main campaign as well. All that content is in one place, making something that was already great even greater. It’s an important addition to Three Kingdoms, allowing players not only to explore historical events, but the journeys of the characters moving through them.

The best Three Kingdoms DLC so far - a stirring rendition of the final days of the Han, the people who rose against them, and the humble heroes whose ambitions would change China forever.