The final Total War: Warhammer II DLC is upon us, and what a ride the last three and a bit years have been. We’ve had dino stacks, rat stacks, sphinx stacks, dragon stacks, and even walking pirate ship stacks. But the time has come to bid a fond farewell, and what better send-off than revisiting the first ever Total War: Warhammer DLC race, the Beastmen. All aboard the minobus, destination doom.

The Silence and the Fury sees metal minotaur, Taurox, race to find the Heart of the Dark, a monumental Beastmen herdstone capable of plunging the world into an age of slaughter. But hot on his trail is Oxyotl, the chameleon skink hunter, hoping to put a dart in the brass bull before he unleashes said ritual. It’s a good setup, but as with recent lord packs it’s mainly there to establish the final battle between Taurox and Oxyotl.

At the centre of this new lord pack lies the long-awaited Beastmen rework, and while it’s tricky to wrap your head around, rest assured it solves a good deal of Total War: Warhammer’s horde gameplay issues. Essentially, Taurox raises a herdstone – similar to a Norscan or Wood Elf outpost – in a destroyed settlement, which establishes a bloodgrounds in adjacent regions. Razing settlements and fighting battles in this area racks up Marks of Destruction (the Beastmen victory resource) that in turn grants more armies and herdstones.

When you’ve killed your fill you enact a ritual at the herdstone and move on to pastures new. My favourite part, though, is that after the ritual is performed other factions can’t resettle ruins in a bloodgrounds until the herdstone is destroyed. 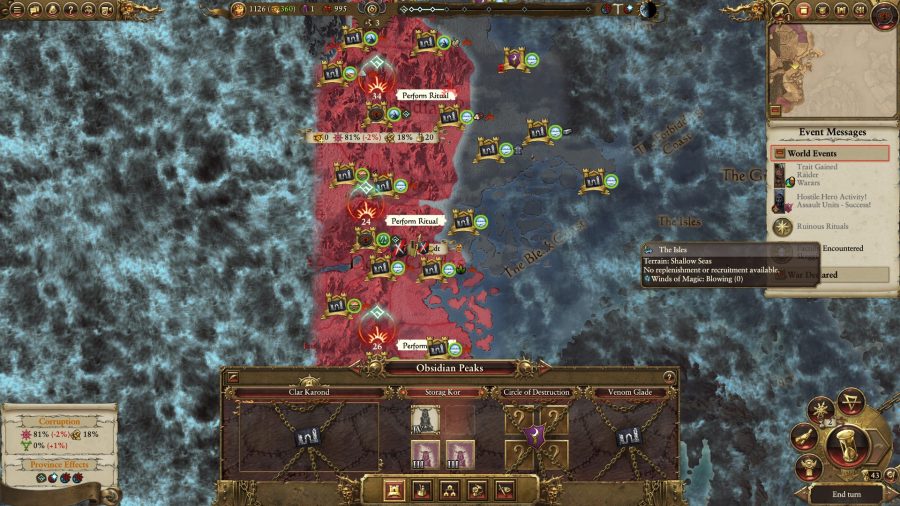 This is a great solution to that evergreen horde problem of enemies resettling faster than you can raze. Herdstones offer a hefty garrison, recruitment, and buildings with regional buffs, so if you lose your horde you’ve got a good fallback point to rally around.

Silence and the Fury is one of the strongest lord packs yet, but its campaigns are among the weakest

Not that you’re likely to ever lose a horde, though. Taurox’s campaign is all about buffs and debuffs. You’ve got herdstone and building buffs that range from increased winds of magic to randomly inflicting plagues on enemy settlements.

You’ve also got Taurox’s river of blood debuff that lowers regional leadership for enemies, momentum buffs for chaining battles, buffs from Morsleib that no longer have any negative impact, as well as a slew of powerful lord, hero, and technology buffs. Replenishment used to be the Beastmen’s biggest weakness, but now they have free single-turn Tomb King style recruitment; you just form a hidden encampment at the end of the turn and re-recruit whatever units you lost. 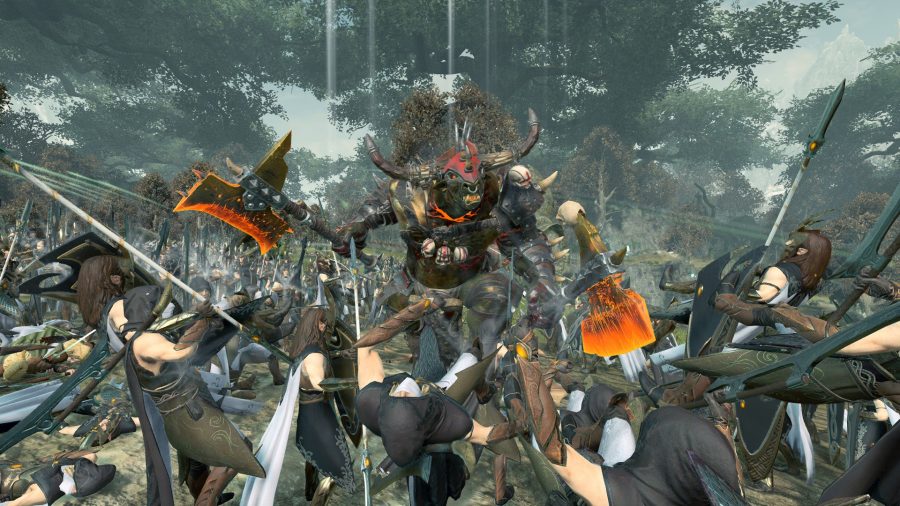 This can make the campaign feel like a cakewalk as before long you’re breaking most armies off the charge. While that fits thematically for Beastmen, it doesn’t allow for much battle variety in a pretty long campaign. In fact, the only slight disadvantage the Beastmen have is that they have to spend Dread – a currency gained through battles – to purchase more legendary lords, and increase unit caps.

It's all ogre now

The addition of ogre mercenaries feels like a perfect farewell for Total War: Warhammer II, adding the ever-hungry giants to the game while also teasing what's to come in the sequel.

The new Beastmen units are very fun, though. The Jabberslythe is kind of like the Hell Pit Abomination and just as upsetting to look at, and the four-armed Ghorgon is a Beastmen god of war. The lords are no pushovers, either. Taurox gives off some real Hashut vibes as a fire-filled metal bull who vents steam to cause AoE explosions. The Doombull lord also punches his enemies instead of using a weapon and what’s not to love about that?

I must admit, though, I had a better time with Oxyotl than with Taurox, mainly because his Visions of the Old Ones mechanic allows for random expansion. Every certain number of turns Oxyotl is presented with opportunities to fight armies across the world, and using his knowledge from 7,000 years spent in the Chaos realm, he warps to ambush them. It’s a mechanic that would’ve been perfect for Nakai, as you mysteriously appear to help Lizardmen factions across the map. But it does mean that no two Oxyotl campaigns are the same, as you fast travel and establish footholds to expand on different fronts, before warping back to your base. 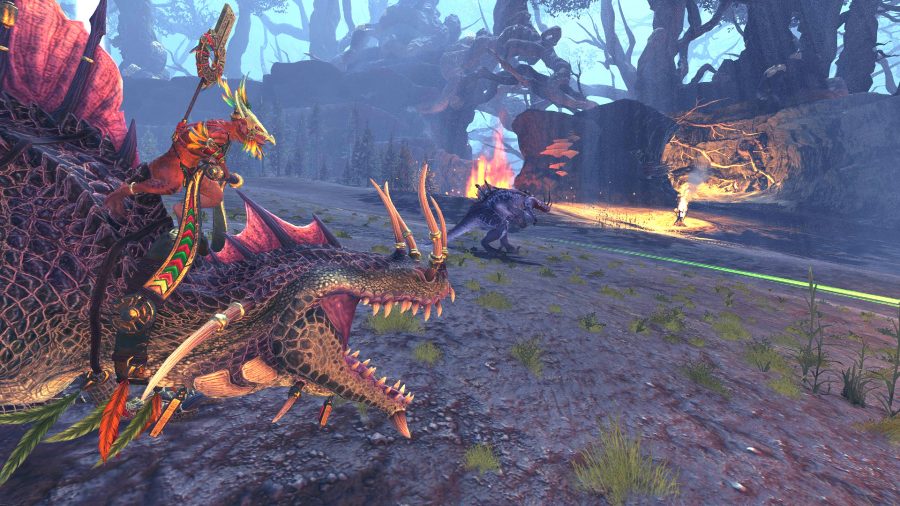 Winning these battles awards Oxyotl with Sanctum Gems that you use to establish Silent Sanctums in any settlement. These permanent underground cities provide regional buffs similar to herdstones, but two buildings in particular are seriously powerful, allowing reduced unit upkeep and a chance for enemies in the region to be ambushed by a Lizardmen army.

Alongside the faction’s skink upkeep reduction and AP damage buff it’s easy to have a huge number of strong armies that cost virtually nothing, especially with Chameleon Stalkers, a cheap shock infantry unit that punches above its price, and Oxyotl’s ability to imbue skirmishers with poisons from the Chaos realm. The Troglodon and Skink Oracle aren’t bad either – just imagine a blind Ancient Salamander that’s good in melee and has poisonous, anti-large, armor-piercing projectiles. My favourite addition, though, has got to be the Coatl, which is a flying sky serpent that gives off some real classic fantasy vibes.

In terms of new units, the Silence and the Fury is one of the strongest lord packs I’ve played, but it has to be said that its campaigns are among the weakest. Say what you want about Call of the Beastmen, but it presented a faction with distinct weaknesses, and weaknesses define campaign gameplay as much as strengths. 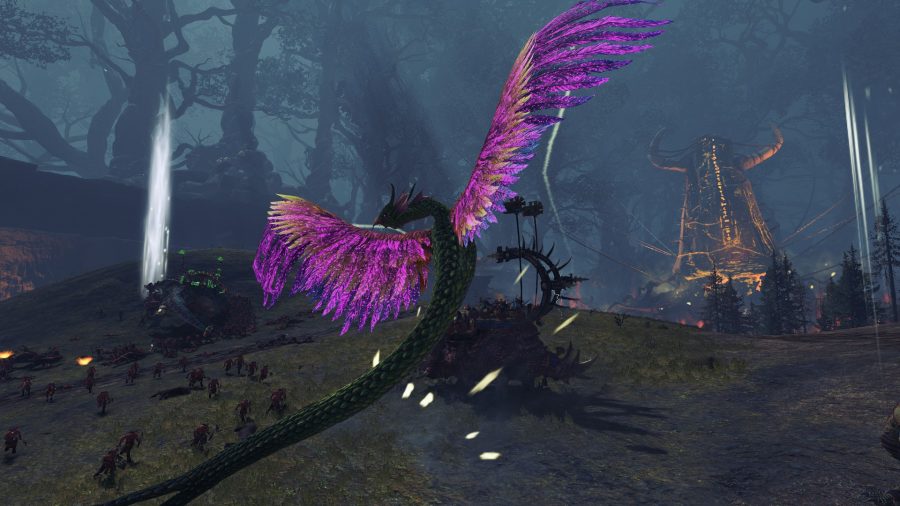 Balancing the power fantasy of the setting while retaining tactical challenge is always going to be a battle for Total War: Warhammer, but in this instance I think the campaigns are just too easy to offer an enjoyable challenge. Cranking up the difficulty isn’t a balanced solution, as it amounts to little more than stat trading.

That said, it’s hard to be too critical when we’re also getting the ogre mercenaries as well as Thorek’s campaign and rune rework for free. The Silence and the Fury certainly sends Total War: Warhammer II out with a bang, but it does leave me dreaming of the balancing reset that Warhammer III will inevitably bring.

Total War: Warhammer II – The Silence and the Fury is out now on Steam.

Total War: Warhammer 2 - The Silence and the Fury review

The Silence and the Fury has some exciting new units and cohesive mechanics, but overly powerful factions prevent its campaigns from offering a fresh challenge.