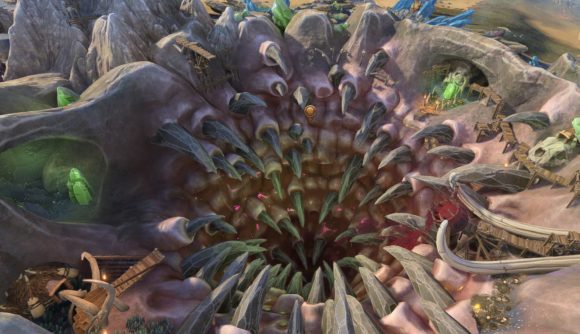 The Great Maw is the deity of the Ogres in Warhammer lore – a giant, gaping mouth in the ground that’s understood to look a bit like the sarlacc pit from Star Wars. I say ‘understood’ because outside of things like Ogre symbols and cave paintings, it’s never actually been depicted in Warhammer media before. That is, not until Total War: Warhammer III.

You will find the Great Maw in the Ogre Kingdoms on the Warhammer III campaign map, and as you can see in the image above, it’s quite robustly detailed. “It’s actually the first time the Great Maw has been depicted in Warhammer lore,” as principal writer Andy Hall confirms for us in an interview. “So have a good look at it. There were lots of discussions.”

A blurb that appears when hovering over the Maw confirms that “the Ogres’ ever-hungry chief deity is in fact an enormous crater caused by a meteorite so huge it almost wiped their entire race from the face of the world.”

In existing lore, the Ogres ask for blessings from the Maw while tossing in meaty offerings. We didn’t get the chance to play with the Ogres in our preview session, but a blog post last year introducing the Ogre legendary lords mentioned that Skrag the Slaughterer has an ability that offers “cost reduction for Offers to the Great Maw”. So, presumably, there are some offers to be made. 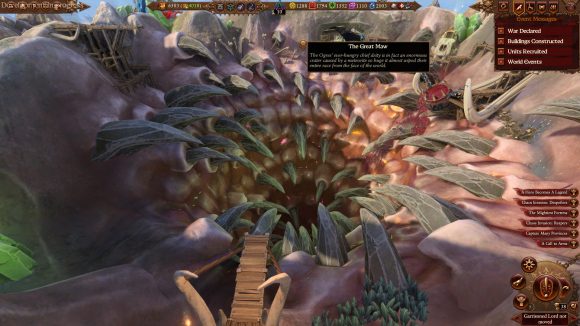