My Daemon Prince, Egrimm, crosses into the Realm of Chaos, and I’m feeling confident; I’m the first contender in this cosmic game show to enter Tzeentch’s fun house. But then, a twist: having arrived several turns after me, Skarbrand walks into a portal that sends him directly to the final round, where a daemon soul awaits in the Impossible Fortress, but only for one claimant. The rest of us will leave with nothing.

The portal was unfixed, its path random, and so his success is blind luck. Having worked to uncover the path the proper way, I’m now a turn behind him, able to catch up but not overtake. My only option is to take him out of the game by force, so I break our non-aggression pact and attack. I get the soul, but Skarbrand – ‘roid rage in daemon form – bears a grudge for the rest of the campaign. He becomes a constant menace on the icy northern shores of my empire, until I bribe N’Kari into distracting him for me.

It’s not exactly an emergent story, but it’s certainly an anecdote. Warhammer fans may get an extra kick out of it as it’s lore-authentic: the forces of Chaos working together until pride and jealousy – mine, in this case – intervenes to stop the ascent of a rival. This is what Total War: Warhammer III’s new Realm of Chaos campaign delivers – and you can pre-order it here, coincidentally.

It’s so much better than Warhammer II’s Vortex campaign, although even that was progress at the time as it curtailed the tedious canter to victory from which previous Total Wars too often suffered. But because the winner in Warhammer II was whomever accrued the most ritual currency, their victory often felt just as inevitable as ever once they emerged from the pack. I also hated its tendency to drop massive hostile armies into the heart of your territory without warning.

Both of these shortcomings are solved in Warhammer III. Rifts into the Realm of Chaos appear on the map every 25 turns or so, and the race is on: you need to send your faction leader through these portals into one of the four Chaos gods’ domains, beat your rivals in a thematic challenge – resisting Slaanesh’s temptations, enduring Nurgle’s plagues – and then win a battle to part the aforementioned soul from its unwilling owner. 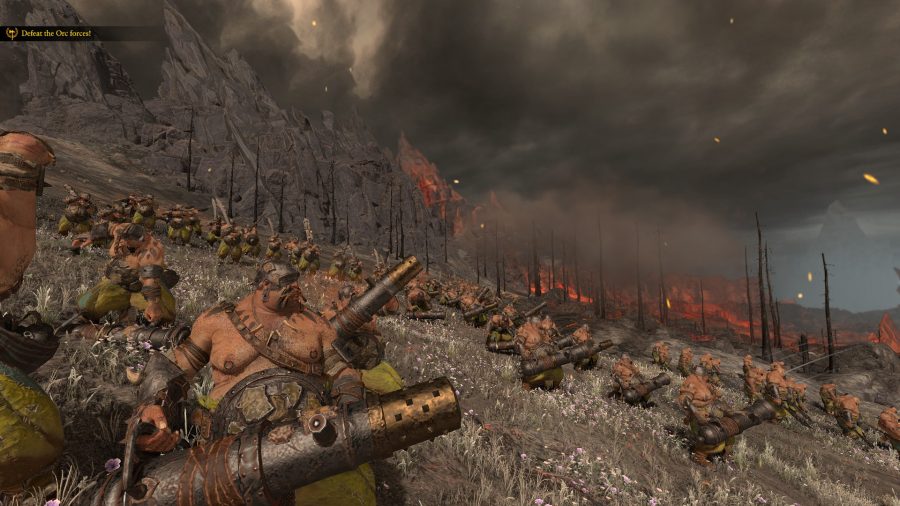 Unlike the Vortex victory, success in these expeditions is barely related to your power in the campaign map. If you’re not ready to dive into a rift as soon as they appear, it’s quite possible to lose a soul to the AI (especially if you don’t believe in save scumming). This keeps you engaged with the campaign throughout its length no matter how powerful you get.

The rifts themselves give you a lot to juggle, too. They vomit Chaos corruption like a sheltered teen at Freshers’ week, and left unchecked, they’ll go on to spawn hostile armies to rampage around your empire. Unlike in Warhammer II, however, there are countermeasures you can take. You’ll be warned a few turns before the rifts appear, and then it’s several turns more before the armies arrive. This gives me time to spread heroes across my territory, and usually I can close them all before they do much damage.

The AI is less savvy, and after a couple of ‘riftings’ great swathes of the map are irradiated by Chaos corruption in a variety of fizzy neon shades. There’s something wonderfully thematic about tearing into Kislev as Skarbrand while lava-filled fissures split its soil like bleeding scars. Once you’ve gathered all four souls, rifts open constantly and spit fully powered daemonic armies all over the world until you beat the campaign’s final battle. It looks and feels exactly as apocalyptic as a story about daemons killing a god should. 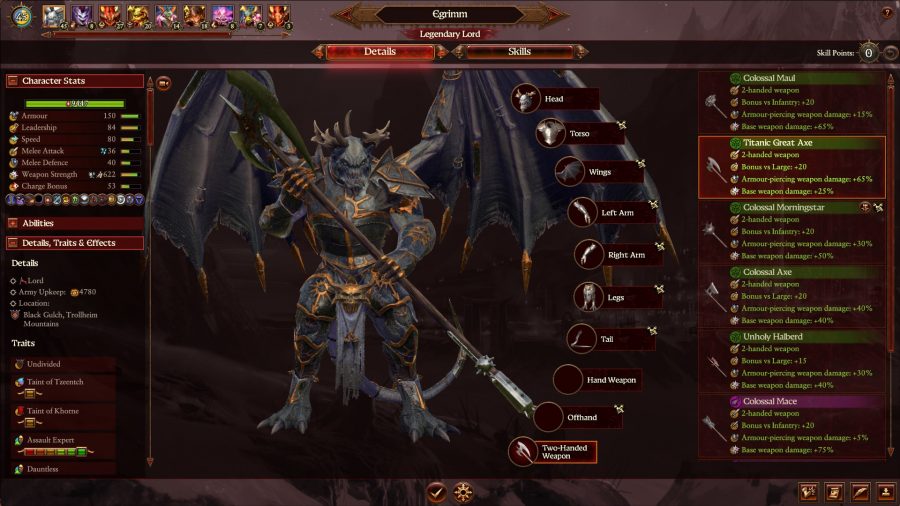 My only criticism is that the race to harvest souls meshes poorly with the rest of the campaign. It’s frustrating to enter the Realm of Chaos too late to claim a soul because your Legendary Lord was finishing a conquest and couldn’t get to a rift in time, or to have to pause your empire-building ambitions because you need to send them into one. The new version of Mortal Empires, due to release at some point after launch, is the place to enjoy the traditional Total War sandbox without such interruptions, but you’ll need to own the previous two strategy games for that.

If you pick up the game in time to get the Ogre Kingdoms early adopter bonus, there are eight races in this contest – double the number of launch races in Total Warhammers I or II – and between them they offer a new high-water mark of variety in a Total War campaign.

Tzeentch gets a delicious menu of manipulations called the ‘Changing of the Ways’. I use these to peacefully steal settlements from my neighbours, encircling the mighty nation of Grand Cathay like a boa constrictor and pumping it so full of corruption that its armies suffer attrition in their own territory. I incite further rebellions there, undermine alliances, and even force internal wars, softening it up for my final overwhelming invasion. 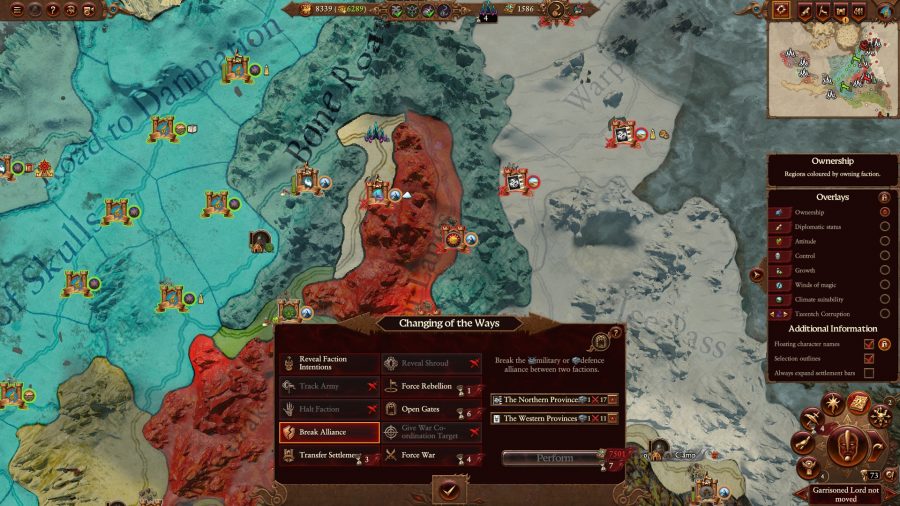 Khorne’s campaign, by contrast, is as subtle as a Bloodthirster’s headbutt. After razing a settlement I get movement range bonuses enabling me to fight again the same turn, as well as the ability to spawn wholly new armies. This, plus an economy based on plunder, is a powerful set of incentives to tear across the map in a frenzy of violence. Tzeentch’s anthem would be written by Leonard Cohen, Khorne’s by Slayer. Both are brilliant.

For the human factions, Cathay and Kislev, their campaign mechanics are more about flavour than imposing a particular playstyle – no bad thing, if you like how Total War traditionally plays. Doughty Kislev is reminiscent of the Empire, with a diverse army roster, a range of infrastructure configurations, and a complex diplomatic situation. Grand Cathay is the choice for builders and turtlers – their only hostile neighbours are behind a formidable wall, and everyone else is ripe for trade and confederation.

I could go on to discuss Chaos Undivided, the Ogre Kingdoms, or the strategic variety offered by the different start locations for Legendary Lords within each faction, but the point is made: each faction demands its own playthrough, and with my completed campaign saves clocking over eight hours, that’s 60 to 70 hours of playtime at launch. And that’s just in single-player. 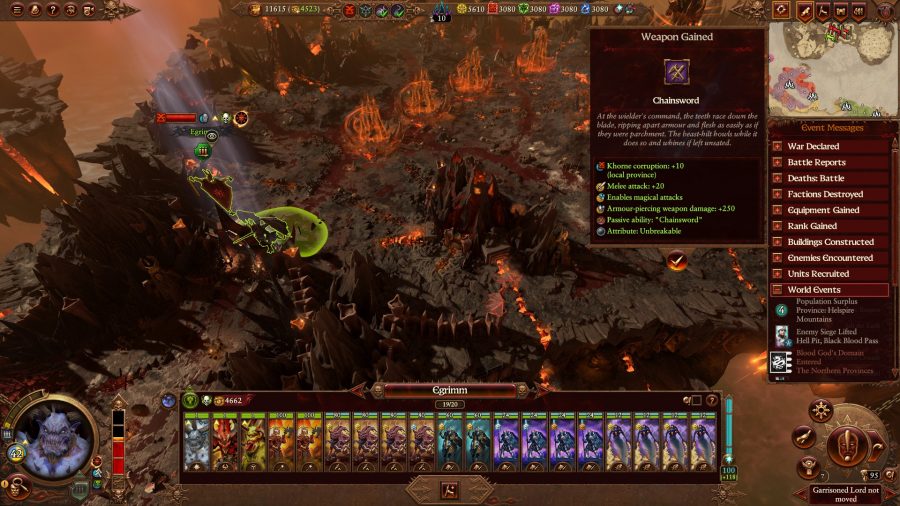 Total War: Warhammer III supports up to eight players taking simultaneous turns in the Realm of Chaos campaign, as well as two new multiplayer scenarios with pacier rules that can be enjoyed in less time than the many weeks such an endeavour would surely take. I got to try one of these, Darkness and Disharmony, in a session with the developers.

Khorne’s campaign is as subtle as a Bloodthirster’s headbutt

The goal is to be the first to 40 victory points, with each settlement you own producing one victory point per turn. It’s basically a royal rumble in Cathay, with the two Cathayan and Ogre Legendary Lords, plus all four Chaos gods. The game is sped up on every level: troops take only one turn to recruit, buildings only one turn to build, recruitment pools are huge, and I start with access to third tier units such as Mournfang Cavalry. It’s a recipe to get stuck into the action quickly, and after two hours the leader is nearly halfway to victory – a good pace for a half-day session.

The absolute highlight is the way battles are handled. Whenever anyone opts to battle manually rather than using autoresolve, other human players can elect to join in. If someone is attacking an AI, a human can take over the AI army to give them a bit of a challenge. But even if both armies have a human commander, you can still get involved: you can join either side, and their commanders can delegate control of some of their troops to you. 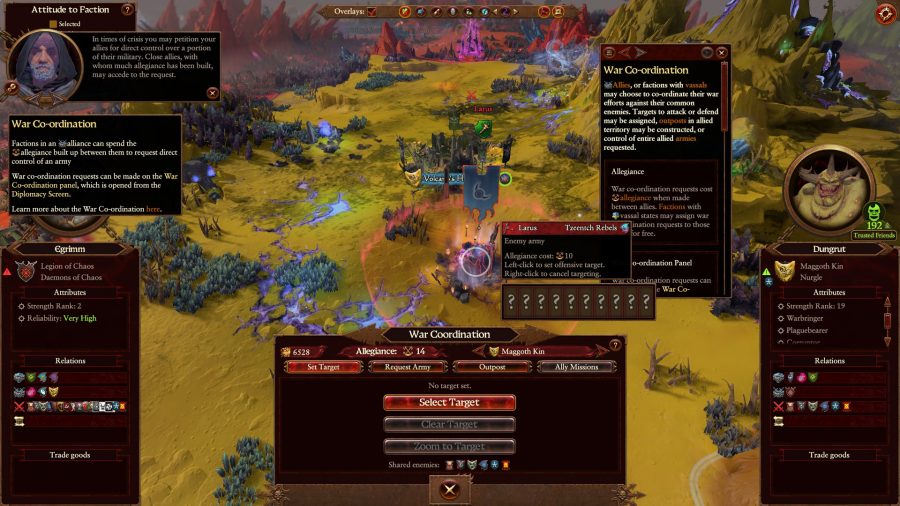 This produces a ton of cool outcomes. If you’ve got a 20-stack army and aren’t the best at micromanagement, just hand your wizards or your shock cavalry to a friend. In a crucial battle, I was given control of three Bloodcrusher units, and was able to concentrate entirely on cycle-charging them down hills into soft and juicy Daemonettes. We won, and my Bloodcrushers led the board for kills.

the game is sped up on every level in multiplayer

The battle maps are the most impressive I’ve yet seen in a Total War game. On a tactical level, they’re now big enough to fully encompass minor settlements and three sides of a city in fully fledged sieges. These maps have intricate, layered streets and construction points for defenders to build fortifications like barricades and towers – there are far more angles of approach for attackers and far more options in defence.

Visually, they’re often jaw dropping. Cathay is defined by soaring, green-crusted cliffs, crowned by pagodas and cable cars. The Dark Lands – which will surely see the arrival of the Chaos Dwarfs via DLC before too long – are a barren expanse of sandy mesas blasted by volcanoes and steaming black lava flows. Encounters in any of the Realms of Chaos have the lurid otherworldliness of a fever dream: the skybox for the final battle in the Forge of Souls could be printed and worn instead of a tie-dyed shirt: a breathtaking riot of orange flame against purple-pink stars. 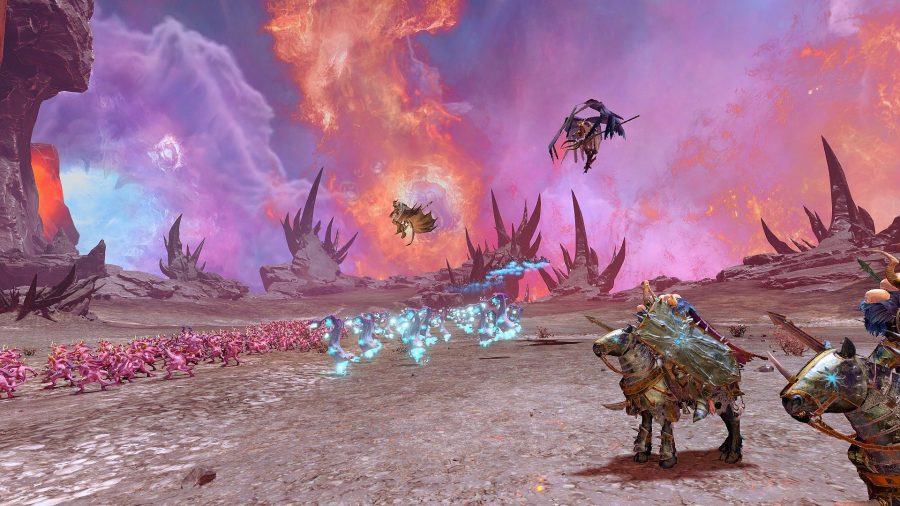 You get the sense that Creative Assembly has poked into every corner of its formula looking for places to polish it. It goes way beyond the headline features of faction and campaign design, a multiplayer overhaul, or the new five-hour tutorial prologue, but to much more modest quality-of-life tweaks that few would’ve noticed had they been left alone. The soft gold of the previous UI is replaced by a vibrant, more readable green. You can now tell trespassing Lords to leave your territory, and if they refuse, you can declare war on them without suffering treachery penalties for breaking diplomatic agreements. Improved war coordination and the ability to recruit your allies’ units provide powerful reasons to forge military alliances now, which I’d previously dismissed as a way to get dragged into disadvantageous wars and only worthwhile as a stepping stone to confederation.

The ambition and the attention to detail is palpable with every click, and proof that Warhammer has surpassed history to become Creative Assembly’s premier product. Warhammer II was supported for over four years and it’s certain that Warhammer III will run for at least as long. On the strength of this foundation, it deserves all the success that’s coming to it.

A triumphant step forward for Total War on almost every front, boasting not just the best and most diverse single-player campaigns ever, but a revolution in multiplayer too.