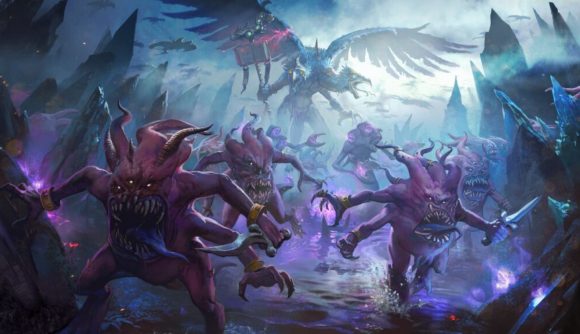 Facing down the horrors of Tzeentch in Total War: Warhammer III is going to be quite the spectacular event, and now we’ve gotten a look at the bulk of the units planned for the strategy game’s weirdest Chaos faction. The Tzeentch roster is heavy on daemons, but unlike the angry red boys found in Khorne’s army, Tzeentch’s soldiers are creatures of magic, and use it to bend and tear at reality itself – or set things on fire, whichever seems like a better idea at the time.

A new post on the official Total War site breaks down Tzeentch’s army roster, starting at the top with his legendary lord, Kairos Fateweaver. A massive two-headed bird creature, Kairos’ right head sees into the future, whilst his left sees everything in the past. That leaves him with a bit of a blind spot for the present moment, but he makes up for that with a magical barrier – a shield that all Tzeentch units have.

Kairos can pick up and use ‘fragments’ from spell lores that give him access to several of those lores’ spells, and his staff of tomorrow can be used to instantly refresh all his own spell cooldowns. He’s also got a nasty Gaze of Fate ability that allows him to freeze an enemy unit in its tracks.

Again, Tzeentch’s daemons – unlike their Khorne-worshipping cousins – are quite at home using magic, and tend to favour either the Lore of Metal or the Lore of Tzeentch, a new offensive school that includes lots of direct damage spells and debuffs.

On the ground, Tzeetch’s infantry ranks are filled with pink and blue horrors – misshapen, foul-tempered monstrosities who have the wrong number of arms, eyes, and just about everything else. There are also iridescent horrors, which can wield magic and ride into battle on discs of Tzeentch or burning chariots.

Tzeentch players can also field Chaos knights and doom knights as cavalry formations. Chaos knights are pretty much Chaos warriors who can get places a bit faster – they skip over the high-impact charge business and can hold their own in melee. Doom knights, meanwhile, are aerial cav that fly on deadly discs of Tzeentch and are the god’s strongest melee unit.

Naturally, being a Chaos god, Tzeentch also has access to plenty of monstrous units. These include a ranged, anti-large version of the mechanised Soul Grinder, Flamers of Tzeentch, Lords of Change, Chaos Furies, Screamers, and Spawn of Tzeetch.

Tzeentch forces combine devastating magic, an overabundance of tentacles and teeth, and a distinctive pink and blue colour scheme together into an army that’s not quite like anything else we’ve seen in Total Warhammer to date. We’ll be excited to take to the field with them when the Total War: Warhammer III release date arrives early next year.