Total War may be recognised as one of the world’s leading strategy franchises, but it has also developed a reputation for having a lot of DLC. One particular community bugbear is DLC which adds blood effects to in-game battles, first introduced in Shogun II and recurring in every game since.

Learn to play the servants of the bloody-handed god with our Total War: Warhammer 2 Dark Elf race guide.

It was no different in last year’s Total War: Warhammer and its Blood for the Blood God DLC. However, if you own that, Creative Assembly have confirmed you won’t have to buy an equivalent for Warhammer II, which is out today.

In response to a cheerful commenter who says they’re looking forward to a free mod that adds blood “before you guys get around to selling it to me again,” CA social media manager Grace Carroll says:

“If you already own it for WH1, we’ve said that you don’t need to buy it again for WH2, so we won’t be selling it to you again.” 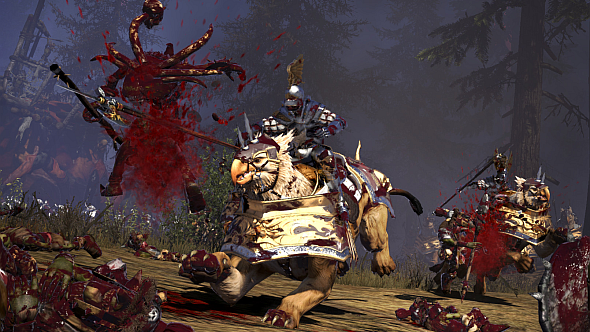 This was actually announced earlier in the year, but seems worth repeating now that Warhammer II is out. CA’s relationship with DLC has been dicey in the past, with a savage community backlash after they made the Chaos Warriors race pack a pre-order exclusive for the original. They made it free for week one purchases in the wake of that feedback, and this year’s Norsca DLC landed much more softly after adopting a similar model.

Observing the ever-mutating monetisation practices of triple-A games is a fascinating thing, especially whe devs seem willing to respond to the community. Are CA homing in on the right balance? Let us know in the comments.