Finishing what they began with yesterday’s Dark Elf campaign gameplay, Total War devs Creative Assembly have shown new footage of the forthcoming race in action, this time in battle.

For more on the Druchii, check out our Total War: Warhammer 2 Dark Elf race guide.

You may immediately notice that the battlefield looks richer and more populated than we’ve come to expect from Total War. CA’s in-house YouTuber Darren confirms that – in settlement battles at least – there are more assets, such as elven army camps, houses, roads leading sensible places, and so on. There have also been graphical updates made to lighting, reflections, and screen space ambient occlusion.

But onto the fun stuff. Highlights from this battle include the appearance of a Moon Dragon, whose pale, almost liquid breath melts a unit of Witch Elves. In the tabletop game, Moon Dragons are stronger than the Sun Dragons we’ve previously seen from the High Elves, but still a step down from their Star Dragons, which I hope we’ll get to see soon. 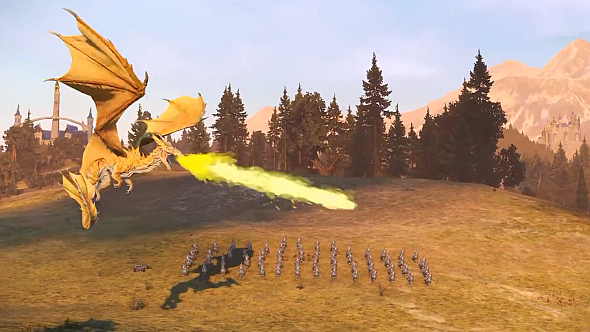 Black Ark bombardment is also shown. As in Shogun II, any battles that take place within range of a Black Ark will enable the Dark Elf player to call in a bombardment via a new menu at the side of the screen. Darren has four types available – expect these to vary depending on the Black Ark’s buildings – each of which has three charges and is on an eight-second cooldown.

Darren drops several bombs all at once on the same clump of enemies, which looks pretty devastating. It also triggers the Dark Elves’ Murderous Prowess buff just in time for a unit of Dark Riders to smash into their enemy’s flank.

When playing with Malekith’s magic, Darren also notes that we can rotate wind spells now. Since these are all about breaking up enemy formations, precise targeting is essential, so this change should make them much more effective.

You can check out the campaign gameplay that prefaces this battle here. We’ve taken a close look at both and pulled the salient points into our Dark Elf army guide, if you’d like to know more about how the Druchii will play.

Total War: Warhammer II is due for release on September 28. For more, check out the Steam page.