Total War developers Creative Assembly have published the campaign map for the forthcoming Total War: Warhammer II, and there are plenty of interesting conclusions to draw.

Here’s everything we know about Total War: Warhammer 2. 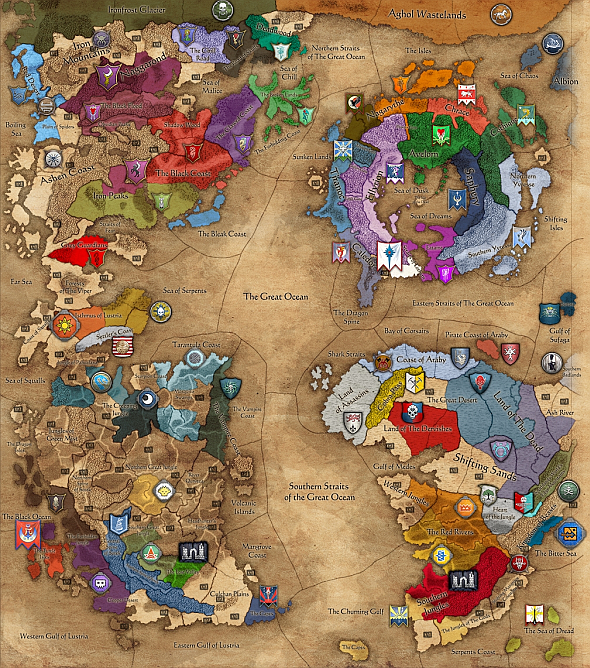 We can immediately see that the Southlands continent is here in its entirety, which means that the Tomb Kings’ homelands and Araby are both in the game, if only in a territorial sense.

The Tomb Kings are an army of Egyptian-flavoured Undead. They’re one of the core races from Warhammer’s eighth edition, meaning CA’s stated ambition is to include them in the trilogy at some point. The campaign map shows their homeland, The Land of the Dead, is under the control of the Strygos Empire; in the lore, the Strigoi are a race of feral vampires, debased after the destruction of their once-glorious kingdom.

Expect them to be displaced when the Tomb Kings are added as DLC – which now seems highly likely – but there’s potential for the Strigoi to be fleshed out; perhaps their progenitor, Ushoran, could be added as a new Legendary Lord with a unique start position and Strigoi mechanics. That could also happen with the other two vampire factions which we now know are in the game: the Necrarch Brotherhood and the Vampire Coast. 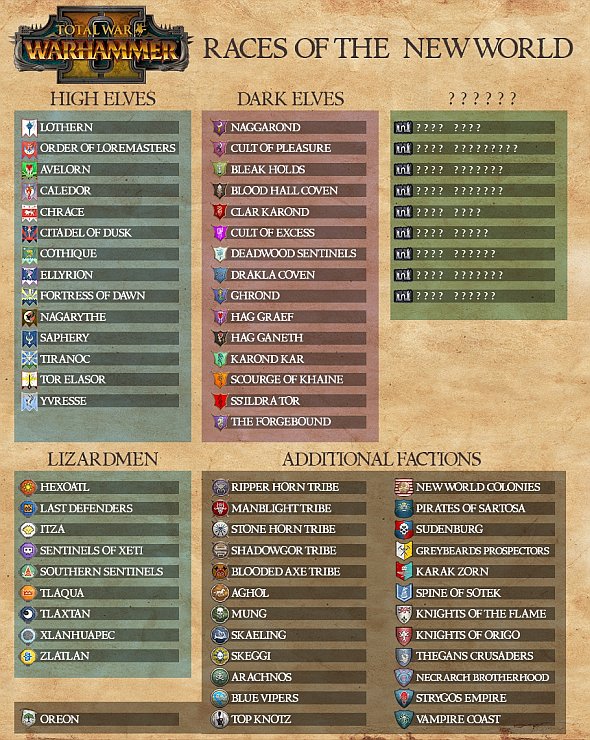 As for Araby, it looks like regions such as the Coast of Araby, the Land of Assassins, and the Land of the Dervishes are under the control of minor factions called Sudenberg, the Knights of the Flame, and Thegan’s Crusaders. Sudenberg is a small Empire enclave in the lore, while the other two almost certainly represent the Bretonnian errantry armies inspired by the Crusades.

Once upon a time, CA were only talking about releasing the 15 core factions from the tabletop game, but then came Norsca – an army that never had a rulebook, and has been pulled together from Forge World models and scraps of lore.

In this post-Norsca world, I wouldn’t bet against Araby being another DLC army after the Tomb Kings. In some ways, there’s more for CA to dig out of Games Workshop’s closet here than there was for the northmen: like them, Araby never got a book in Warhammer, but they were an official army in Warmaster, a larger-scale specialist game set in the same universe. They’re cool, if cringingly stereotypical – their wizards can summon genies, they can take to the skies in flying carpets, and they field whole units of elephants.

A few more minor tidbits. Albion, Warhammer’s analogue of Britain, is barely visible in the top-right corner of the map, under the control of the Norscan Skaeling faction. The Top Knotz Greenskin faction return in the southern Badlands, and the Pirates of Sartosa make an appearance. There are also a bunch of factions marked with question marks that are surely placeholders for the yet-to-be-revealed fourth race, whose identity has got everyone stumped. Yes-yes.

Here’s the campaign map as revealed on Steam.