Skaven are one of Total War: Warhammer II’s four races. They’re a bunch of hideous rat monsters that swarm enemies and nibble them down to size with great big yellow teeth. We’ve spent plenty of time commanding them in war, paying close attention to their campaign mechanics and in-battle behaviours.

Accordingly, we present our Total War: Warhammer II Skaven guide: a full rundown of Warhammer’s ferocious, subterranean race. Here’s how the furry beasts play, from unique mechanics and race traits, to grand strategy and tactical tips. And not only that, we’ll tell you how best to use all of these tools to best your opponents. Ready to get ratty? Then let’s begin.

After something specific? We’ve broken our Skaven guide down into the following sections to make it easier for you to find your way around: 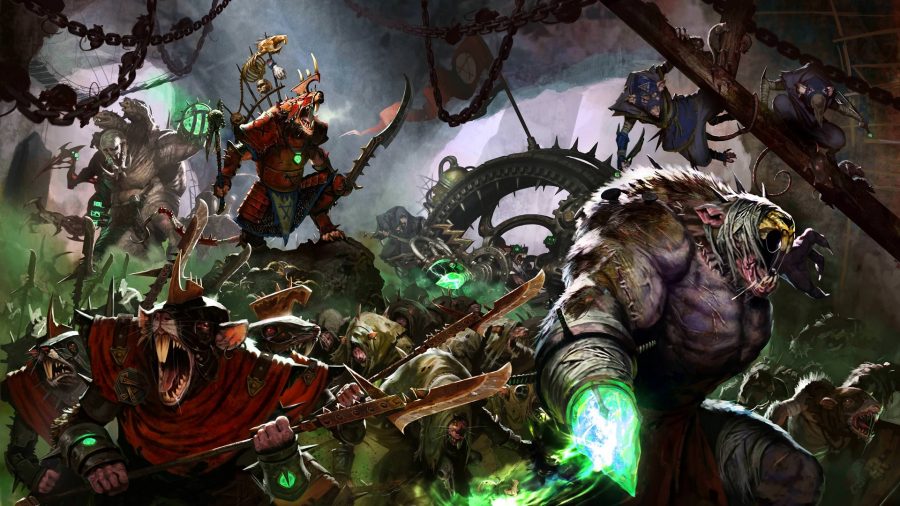 Even more so than the Dwarfs, Skaven are an underground race. It goes without saying that they can use the Underway, though they also have a unique army stance: Stalking, which gives them a chance of making an ambush attack even while moving normally.

you can feel a bit more confident leaving cities undefended

The Skaven’s subterranean nature is best reflected in the fact that their settlements are hidden to other factions – rival empires will see only ruins. Ruins are a new addition to Total War: Warhammer II – they’re explorable nodes on the campaign map that’ll offer a quick bit of flavour text and a modest reward. Think of them like goody huts in Sid Meier’s Civilization.

This means you can feel a bit more confident leaving cities undefended as Skaven – though it’s obviously still a risk – but otherwise it needn’t make much difference to how you play. From your perspective, you’ll need to juggle two other major mechanics: Food and Skaven corruption.

Like most races, the Skaven use gold, but each of the four in Warhammer II’s Vortex campaign also get a second ritual currency. The Skaven’s is Warpstone, which you’ll use to destabilise the Great Vortex and chase the narrative campaign victory. In addition to these, however, the Skaven have a unique third currency: Food. 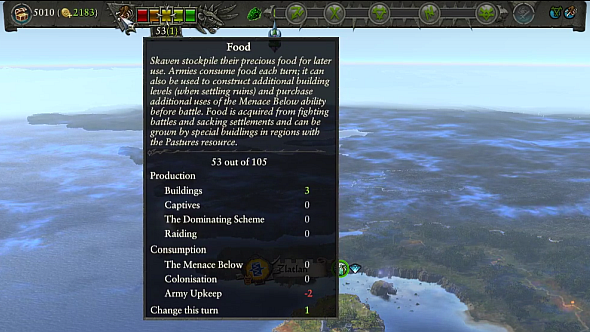 Food affects growth, army leadership, and public order factionwide, with big bonuses when it’s plentiful and equally big penalties when stocks are running low. At the lowest level, you also get massive 25% penalties to gold income from raiding, battle loot, and sacking settlements. Sustaining armies will consume Food as well as gold.

Consistent Food sources are rare. Particular settlements might offer a reliable supply, but they’re few and far between – for the most part, you’ll add to your stocks after killing enemy armies or sacking cities. You literally eat what you kill, which puts a bit of pressure on you to keep fighting and expanding.

Food is also consumed when you colonise a captured settlement. There’s a minor cost to colonise as normal, but you can spend extra Food to begin the settlement’s main building chain at up to tier three. That’s pretty huge, if you can afford it – it skips potentially dozens of turns of population growth and construction.

It also feeds (heh) into Total Warhammer II’s new climates mechanic – in the original, the four launch factions were divided into pairs, with each pair unable to occupy settlements belonging to the other. That’s getting replaced by this ‘climates’ system, wherein you can technically colonise any settlement, but growth rates, building costs, and income will all suffer if you pick one in a climate that doesn’t suit your race – Dwarfs, for instance, prefer mountains. 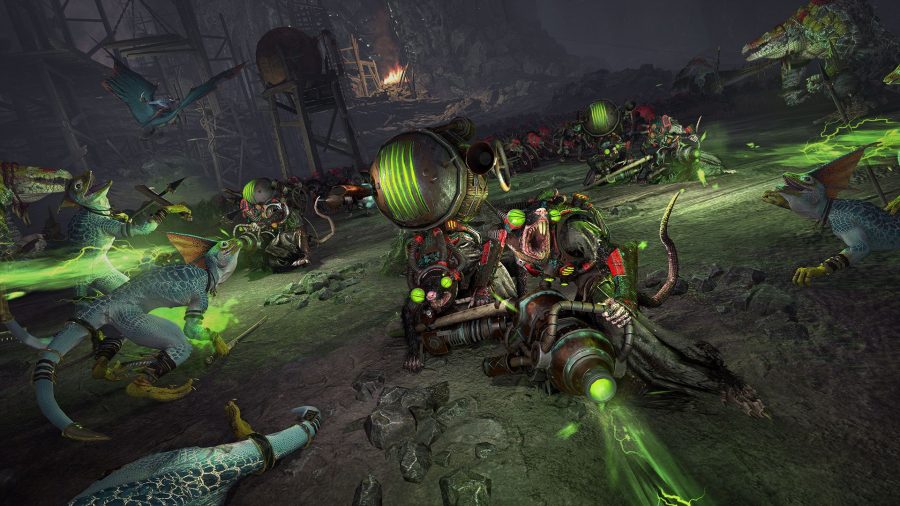 Since the Skaven can settle new towns at tier three, they can expand more quickly – and with a higher tolerance for hostile climates – than any other race. That’s very much in-character for a race of vermin. It may also be necessary, as another Skaven mechanic nudges them into expanding quickly: Corruption.

Skaven corruption joins the Vampiric and Chaotic varieties, and will hurt public order in a province in the same way. It differs in that it’ll hurt the Skaven’s own public order as well – campaign designer Eva Jobse told us that the Skaven don’t so much control a region as infest it: as they linger and multiply, they consume all resources and then starve again. “It gets overcrowded, it’s filthy, it’s messy, and it’s prone to cannibalism, like any rat colony that grows too big.”

Low public order equals rebellions, as we know. But in a twist to reflect the infamous faithlessness of the Skaven, this isn’t the only kind of rebellion they can suffer – your own Lords can also turn against you. You can gauge the risk of this by mousing (heh) over their Loyalty meter. Keep your Lords happy by giving them large, powerful armies, gifting them magic items, and sending them to war, because a bored general is a restless one. If a Lord does rebel, they’ll take their whole army with them, so don’t think you’ll be able to squash them like normal rebellions if you’ve decked them out with Hell Pit Abominations.

If you're after less fur and more scales and sacrifice then you should look to command the hissing armies of the Lizardmen. Wield the Geomantic Web and get huge empire-wide boosts to your people. What more could you want from these cold-blooded killers?

There are upsides to Skaven Corruption. For one, you can weaponise it by spreading to rival provinces, hurtingtheirpublic order, and it also grants more uses of the Menace Below. That’s a new battle ability that’ll let you spawn a free unit of low-tier infantry wherever you like, like the Vampires’ Raise Dead spell (you can also buy more uses with Food before each battle). Accordingly, you might want to spread Corruption ahead of an invasion, or rein it in if you’ve found a place you’d like to turtle. You can take either approach through new, mutually exclusive building chains and Lord skills. 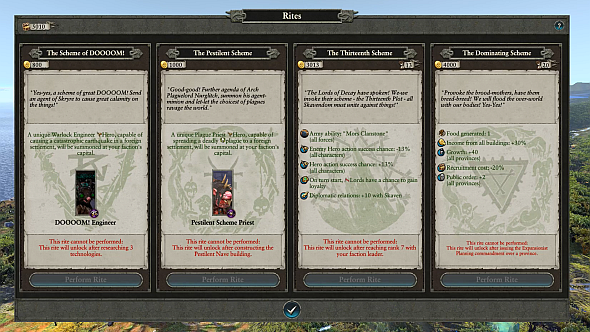 Corruption isn’t the only thing you can spread. As masters of disease, the Skaven can also sow plagues in a mechanic that returns from Total War: Attila. In that game, disease could slowly kill the population of an army, much like attrition, and could spread to other factions via contact with infected armies or trade routes.

In Warhammer II, plagues are generated when a Skaven faction performs the rite of the Pestilent Scheme. Rites are new power moves you can trigger on the campaign map; each of the new races gets four, and the Skaven can simply purchase theirs with gold. The Pestilent Scheme will summon a unique hero who can infect enemy armies or settlements with a hero action.

Another rite spawns a Doom Engineer, who basically gets a nuke. According to communications manager Al Bickham, his “sole role is to be sent off to enemy cities, which he will burrow underneath and create a warpstone explosion. There will be a massive earthquake and buildings will be severely damaged. You can send him off to an enemy’s capital city, and unless they spot him coming, you can deal a tremendous blow.” 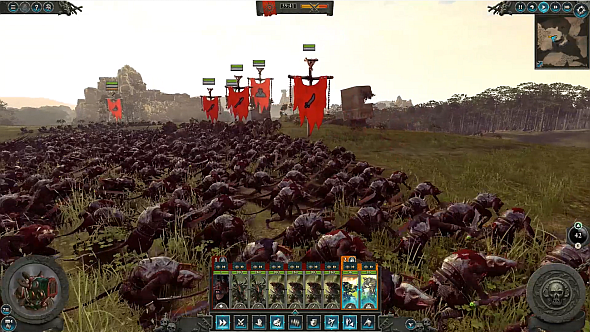 The Skaven army roster is long on infantry and war machines, but short on cavalry and armour. There’s a distinctive approach to ranged units, with a preference for shorter-ranged slingers and gas grenadiers over conventional archers or handgunners. Skaven morale is also very fickle – they run easily and get army-wide boosts to speed when fleeing, but also rally quickly once they think they’re safe.

Your early-game units are Slaves and Clanrats. They’re cheap and quick to produce, but frankly, they’re pretty crap, and will struggle to kill anything they don’t outnumber. Fortunately, their maintenance is low enough that you can run large stacks early, and you can also use The Menace Below to overwhelm your opponent, or make a suitably sneaky surprise attack. One trick is to drop a unit of rats on a fortress capture point, thereby forcing your opponent to commit some troops to deal with them, perhaps pulling them off the walls.

In the early game, you’ll basically win battles by flooding the enemy with all this rubbish infantry – there’s a hint of early Vampire Counts about it. Things get much more interesting at tier three, when you get access to decent infantry in Plague Monks (frenzied damage dealers) and Stormvermin (basically your only armour), as well as artillery in the form of Plagueclaw Catapults, and monstrous infantry with Rat Ogres. Gutter Runners add an almost Wood Elven harassment option – they can fire while moving, and hide anywhere – while Warpfire Throwers can deal horrific damage to infantry at mid-range.

Later, Warp-Lightning Cannons complement the splash damage of catapults with some punishing single-target damage at range – perfect for monsters – while Doomwheels and the monstrous Hell Pit Abomination – special rule: Too Horrible To Die – can have a frightening impact in melee.

The Skaven have many strengths: given lots of Food, they’re the most expansionist faction in the game, able to kickstart new settlements or drown enemies in a flood of chittering rodents, erupting from beneath the battlefield. Combined with the boons to growth and leadership from a Food surplus, invisible cities, and the ability to aid invasions by spreading Corruption, there’s a real sense that a Skaven army with momentum behind it will be hard to stop.

And yet, that momentum can be hard to develop. Until you can recruit tier three units into your army, you’re very vulnerable to your early-game rivals: with so little armour, ranged units spell trouble (especially the skilled elven ones), as do the powerful core units of the Lizardmen – Saurus Warriors will eat you alive until you can field Stormvermin. You’ll also need to consider Corruption management when you want (or are forced) to take your foot off the gas, so consolidating your gains is slightly harder as the Skaven than the other races.

Need a change of scenery? Try the best strategy games on PC

The Skaven may be the most ambitious endeavour yet in CA’s ongoing work transplanting factions from one game system – tabletop Warhammer – to the very different context of Total War. But early impressions are positive: there are lots of clever, characterful nudges here that give them an authentically Skaven feel, and a unique challenge.

Of course our Total War: Warhammer II Skaven guide is swarming with knowledge and information, but if you’ve got any tips to share with us, drop them in the comments below.