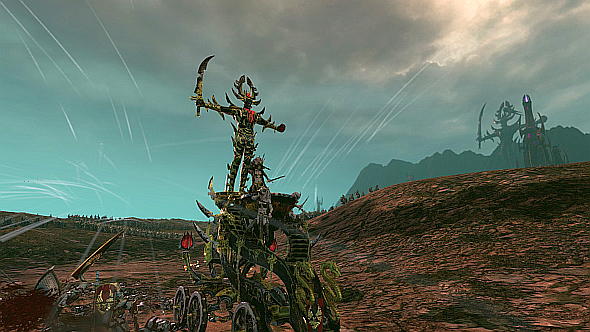 I don’t tend to shout at my computer during game sessions, but if I did, I’d say something like the above. I’m thinking it very loudly.

I am Crone Hellebron, and the upstart new High Elf Alith Anar (new to Total War: Warhammer, that is – he’s actually thousands of years old) is conquering my Dark Elf cousins in Karond Kar to the south. That in itself is no big deal – I didn’t like them anyway – but I’m busy trying to subjugate the Deadwood Sentinels (also Dark Elves) to the east, and I don’t need him opening a second front on my border. That’s why it’d be really cool if these idiots would just turn right.

Even without The Queen and the Crone DLC, we think Total War: Warhammer 2 is one of the best strategy games on PC.

The idiots to which I refer are my Blood Voyage; an allied army formed by those who survive the wanton slaughter of each Death Night. Like a high-end intervention, they’re immensely powerful, allied to me, and yet I have no control over them. Rather than just turn right and attack Alith Anar, they’re sailing determinedly to Ulthuan, where they will pillage Tor Anlec and Alith’s forgotten kin in Nagarythe. Thematic, sure, but no help to me whatsoever.

This is the latest anecdote to emerge from Total War: Warhammer II’s ever more varied sandbox of meshing mechanics. It’s made possible by the game’s next content injection, which lands tomorrow, over four months after January’s Tomb Kings expansion. It comes in three pieces: the paid Queen and the Crone DLC, the free Alith Anar Legendary Lord, and the (also free) Resurgent update, which makes many tweaks and additions to Warhammers I, II, and the Mortal Empires campaign that connects them. I’ve had a week of early access, and it’s testimony to how meaty this update is that I’ve not been able to sample all of it in that time. The headline news is that all three of the new Lords get a unique campaign mechanic that aims to make playing with their factions feel fresh again.

I’ve had the most experience with Hellebron’s campaign, and even by Dark Elf standards, the eponymous Crone is vicious. As the High Priestess of Khaine, elven god of murder, she is the leader of the Witch Elves and supervisor of Death Night – a horrific annual ritual in which her minions abduct and sacrifice their own people. Hence, Hellebron can call a Death Night to enjoy a number of buffs to leadership, public order, Lords’ loyalty, and Hellebron herself. These buffs wear off in time, and if it’s been too long since your last Death Night, they’ll decay into severe penalties.

It costs slaves to hold a Death Night and the required number increases each time. Slaves are crucial to the Dark Elf economy no matter your general, but with Death Night sucking up even more of Hellebron’s supply, she has an even stronger incentive to get raiding and sacking. You have to be aggressive, but woe betide you if you miscalculate: with two armies happily steamrolling the Deadwood Sentinels in the east, I elect to start a Vortex ritual just because Tyrion has done so, figuring my ally, Malekith, can cover my west. Needless to say, the Chaos army spawns in the west, marches contentedly past a sedentary Malekith, and torches a settlement that was crucial to both my ritual and my economy. 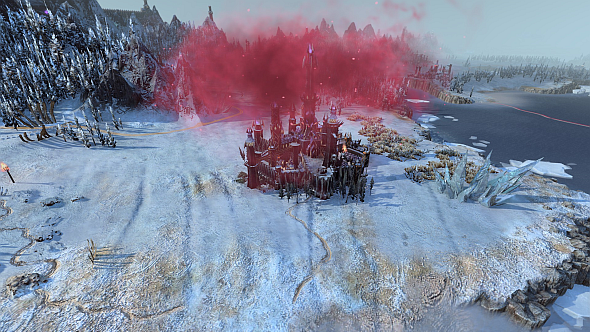 I sue for peace before I can finish the Sentinels, recall my forces to finish Chaos, and then have to hold a Death Night because it’s been a while and the buffs are turning into penalties. I’m now dangerously low on slaves and have to rebuild a breadwinning settlement from scratch, leaving my economy gutted. It’s quite the sudden reversal of fortune.

Blood Voyages will spawn the turn after a Death Night, and will promptly sail to Ulthuan to harass its northwestern shores, even if it would be far more helpful and strategically sound for them to just turn right. Since your first Death Night costs 800 slaves – and an early event gifted me 500 – this means you can send a 20-stack of Black Dragons, Sisters of Slaughter, and Executioners while everyone else is still at tier one. I haven’t yet played enough of Alarielle’s campaign to know if AI Hellebron’s Death Nights will also send endgame armies at you, but if they do, that’ll be a huge problem. 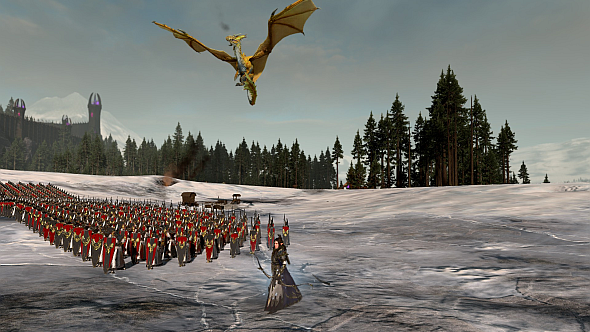 Indeed, all three of the new campaigns – Hellebron, Alarielle, and Alith Anar – are rated ‘hard’, and I suspect Hellebron’s may in fact be the easiest. Despite Death Night nudging you to be more aggressive, her starting position is fairly simple. That’s not true of her Asur cousins: Alarielle – very much the soppy, bleeding heart type – receives penalties when parts of precious Ulthuan are under enemy control, and that’s how her Vortex campaign starts. Dark Elves have breached the island’s inner ring in both the north and the south, and kicking them out will take time, during which your public order, income, and diplomatic relations are all suffering. On the upside, she can recruit Wood Elf forest spirits through a unique building in her headquarters – including Treemen.

As for the edgelord Alith Anar, he has entirely abandoned his homeland to invade Naggaroth. He starts with just one settlement in Karond Kar and has no contact with Ulthuan, which leaves him with precious few trade partners until you can recruit a hero or a second Lord. His campaign mechanic gives you 20 turns to kill any of three enemy Lords (usually but not always Dark Elves), with variable rewards for doing so. Typically, these will include gold and influence, as well as some interesting campaign buffs.

As a master guerilla, Alith Anar also shares the Stalk stance with the Skaven, giving a chance to ambush enemy armies when attacking normally, and can use the Shadow Realm to get around (it works a lot like the Underway, except he can’t be intercepted). These features, together with the many sneaking and shooting buffs he can confer on his army, give his campaign a very different flavour when compared to the more vanilla Tyrion or Teclis.In many ways he’s better at this sort of sneaky play than the ratmen. 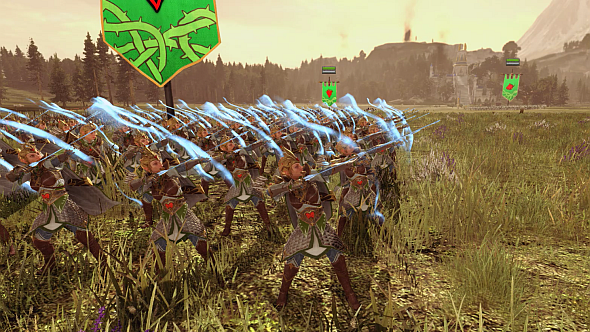 All three of the new Lords start with some powerful units to make those early battles easier. Alarielle’s Sisters of Avelorn are undoubtedly the best archers in the game now, with an enormous range and armour-piercing arrows that hit with enough force to send enemy troops ragdolling back – they utterly melt tier one infantry in the opening turns of her campaign. They eclipse Alith Anar’s Shadow-Walkers, but he does get a Moon Dragon to compensate. Hellebron’s Sisters of Slaughter are excellent defensive fighters, able to pin opponents in place for a devastating charge from her Har Ganeth Executioners.

The common thread running through tomorrow’s update is the Sword of Khaine, also called Widowmaker – a stupidly powerful magic weapon which grants enormous boons to armour-piercing damage and melee attack, a 20% ward save, and a unique vortex spell. It features in all three of the new campaigns and in Mortal Empires. Any race can take the sword by defeating its previous owner, but only elves (High, Dark, or Wood) can spawn it initially by building the Shrine of the Widowmaker at the Altar of Khaine in Nagarythe.

The AI absolutely loves to do this, and in my Hellebron campaign, Widowmaker passes between warring High Elven princes like a cask of Bugman’s at a Dwarf feast. Lore nerds might object to this: drawing Khaine’s blade is meant to be an apocalyptic decision which, last time it was taken, doomed the entire elven race. Yet the AI whips it out like it’s at a rugby initiation (#banter, ladsladslads). 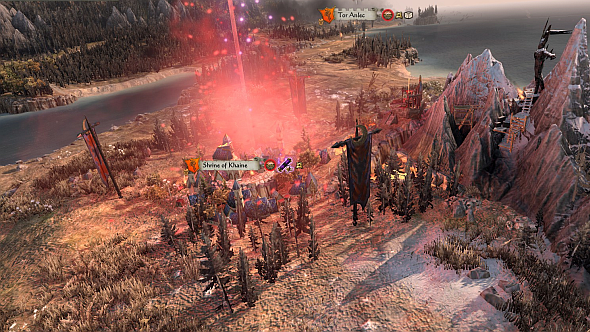 Disgruntled (and cheeky) posts on Reddit and the Total War forums indicate that the four month wait for more Warhammer content has been too long for many players. While Total War games have always offered hundreds of hours of value to hardcore historical hobbyists and real-time tactics battlers, Warhammer has clearly brought a shift in the playerbase. Thanks to the more mainstream appeal of the IP, and to Creative Assembly’s success in offering such a rich content pipeline for the first game, it feels like more casual strategy fans are also viewing the series as their hobby.

They are harder to satiate, however, and as much as four months is a long time, it’s worth remembering that this series of grand strategy games has never been updated like Overwatch. Still, on current evidence, the wait has been well worth it. The three new Lords, one of which is free, are different enough to justify another campaign. The new units and Regiments of Renown also make their presence felt, with the High Elves now enjoying some of the deadliest ranged options in the game. The addition of Norsca and the Sword of Khaine to Mortal Empires reaffirms it as the richest campaign Total War has ever had, and that’s without even getting into the overhauled Dwarfs. 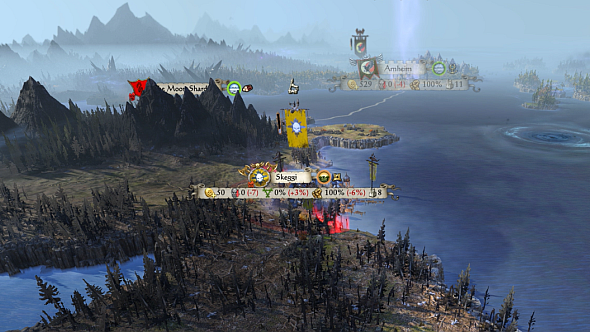 At $8 (or £6) on Steam, the Queen and the Crone costs about as much as a fast food meal, or two beers – well, nearly. I’d say that’s pretty reasonable. If you’re not convinced, you’re still getting a good amount for free. Here’s hoping it’s enough to satisfy a hungry community until the next DLC (Araby? Please be Araby.)