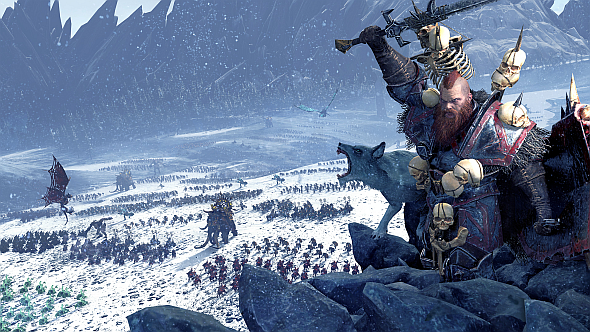 Total War: Warhammer’s Norsca DLC is interesting. Norsca never got an army book in the tabletop game, so Creative Assembly have had to be more creative in assembling their army than with any other faction. I recently had the chance to ask them about this, and what it means for the future of the trilogy.

In the meantime, read all about the main players with our Total War: Warhammer II race guide.

In developing Norsca’s unit roster and strategic mechanics, CA drew on old rules, models from Games Workshop’s hobbyist site Forge World, and Warhammer’s rich lore. Given the work involved to make a basically non-essential race, I find it hard to believe CA had this planned from the beginning of the project. When was the decision to do Norsca made?

“Nearly everything we are doing now was in the original blueprint, but as it happens Norsca wasn’t,” game director Ian Roxburgh says. Norsca arose from conversations about the pre-order incentive for Total War: Warhammer II, in light of the backlash against the Chaos Warriors DLC for the first game.

“We looked at what happened with the Chaos DLC and realised how negative everyone was about that, and the whole ‘cut content’ thing,” Roxburgh says. “We didn’t want to go there again. Norsca was a great idea for a pre-order incentive in that people can play before release, people were asking for Norsca, and it was a part of the map that hadn’t really had much gameplay over it, for obvious reasons.

“So it came about as a result of that more than anything else: a result of [us asking] ‘how do we do this’.”

Unlike Chaos, Norsca are a minor faction in the setting, and they don’t even feature in Warhammer II’s Vortex campaign – this is DLC for one game being offered free for pre-orders of another. No question of cut content here.

What’s exciting about Norsca more broadly is the precedent it sets for CA to go beyond Warhammer’s core army books and look at other minor factions, such as Kislev, Dogs of War, Chaos Dwarfs, Araby, and so on. I ask if fans of those races can take heart from Norsca.

“I think it is fair to say that there is a reason they could be encouraged by the existence of Norsca – shall we put it that way?” Roxburgh says, audibly stepping around open manholes.

“There are things we can do beyond the core army books that we have plans to do… We know the fans really want certain things that aren’t canon, and we want to do them, and it’s part of the plan. So, where you’re coming from thinking we want these kinds of things – yeah, there will be a lot of that in the future, so don’t worry about that.”