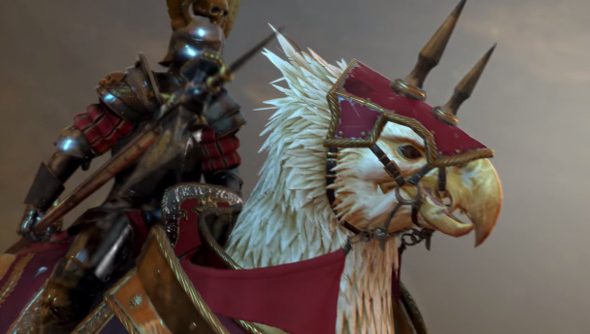 Total Warhammer bears down upon us like a regiment of Bretonnian Cavalry. In advance of its thunderours arrival, and the release of an in-engine trailer this week, Creative Assembly are putting out a video series introducing some of the flashiest units we’ll see in Total War: Warhammer.

And we’re starting with Demigryphs.

Unlike the lame Hippogriffs at Hogwarts, which barely do anything except serve as a dubiously effective means of transportation for crap wizards who can’t ride brooms or teleport, Demigryphs are all about kicking ass… and preening.

Let Creative Assembly fill you in on what they do.

It sounds like we can look forward to a lot of videos in this vein in the lead-up to the trailer this week.