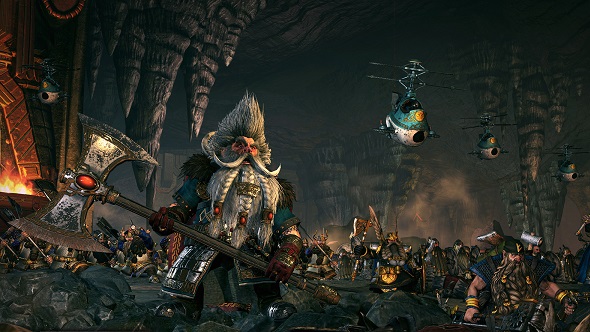 As promised when he was first announced last October, Grombrindal the White Dwarf’s exclusivity period with Games Workshop stores has ended and he is now free for all owners of Total War: Warhammer to download and add to their games.

How’s Creative Assembly’s take on the Warhammer Fantasy universe? Arm yourself against the taint of Chaos with our review.

Grombrindal istheWhite Dwarf, the angry little fellow after whom Games Workshop’s official magazine is named, and he’s a Legendary Lord for the Dwarfs in Total War: Warhammer. Like all Legendary Lords, his skill tree is unique, but his abilities give Dwarfen generals a totally new way to play on the campaign map.

See our original story below for more, or head to Steam to download the free update. Another free update for Total War: Warhammer – the Kingdom of Bretonnia – is due next month.

Grombrindal’s arrival is heralded with a new trailer, in which lead writer and narrative designer Andy Hall walks you through his background as the camera takes a lustful look at his character model. Grombrindal joins Thorgrim Grudgebearer and Ungrim Ironfist as the third of the Dwarfs’ Legendary Lords.

Unlike most Dwarfs, who have a strong bond to their clans and their homes under the mountains, Grombrindal is a wanderer and a loner. He appears before battle to lend his axe – which usually proves decisive – before disappearing as quickly as he came. In Total War: Warhammer, he will have four quest-chains to acquire each piece of magical equipment he wields, and such unique abilities as ‘Flash Bomb’, which blinds and slows enemies; the greatest campaign reinforcement range of any Lord; and even the ability to assume the aspect of one of the Dwarfen Ancestor Gods.

You’ll need a Steam key to unlock Grombrindal for use in Total War: Warhammer. According to Grombrindal’s Steam page, you can acquire such a key in the following ways:

Grombrindal will be available to add to your game as soon as you can get hold of one of these codes. His arrival comes just days after The King and the Warlord, a larger content pack that added new units and Lord types to the Dwarfs and the Greenskins.