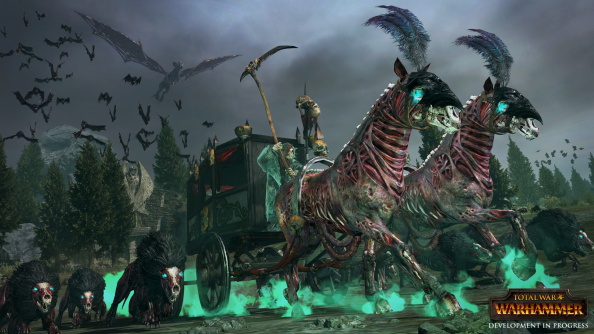 “What is Total War: Warhammer?”, Creative Assembly ask themselves in their latest trailer. Frankly it seems a bit late in the game for those sorts of questions, a week off release, but they do make a compelling argument for its existence.

Like the idea of customising heroic characters from scratch? Pick the best RPG for you.

While it’s probably not news to you that Total War is played via two separate but connected game modes, one a strategic turn-based map and the other a mess of clashing bodies, it doesn’t hurt to be reminded of that core widescreen appeal after all these years and iterations.

What might have passed you by in the months of PR prep that have built to Total Warhammer’s launch on Tuesday are its RPG-like elements – the Legendary Lords who, as commanders of each race, carry their own traits and skills around the map and onto the battlefield, lending abilities and swishy capes to the fight.

You can level up your officers, send them out on quests, and steer their skills and spells yourself. You can also rename them, which if you’re playing the Empire means you get to throw around Ludwigs, vons and Schwarzhelms.

Are you planning on picking up Creative Assembly’s lovingly hammed up latest once it’s out?