You probably don’t get how big a deal Royal Hippogryph Knights are. Not only are they paragons of chivalry who gained superhuman powers after drinking from a magic cup and then tamed a savage flying monster, but – unlike the vast majority of units in Total War: Warhammer – they never existed in the tabletop game. Until the Royal Hippogryph Knights arrived in the Bretonnia update, Creative Assembly had only ever adapted units from the tabletop game’s official rule books.

That wouldn’t suffice to make a playable faction of Bretonnia, who hadn’t had a tabletop update since Warhammer’s sixth edition back in 2004. That particular book didn’t contain nearly enough units to stretch across Total War’s many technology tiers – there was no such thing as ‘elite’ infantry, nor a flashy endgame centrepiece, like a Hell Pit Abomination or Steam Tank. Creative Assembly had to get creative.

But given Warhammer publisher Games Workshop is famously protective of its IP – an approach which has served well, because can you remember a licensed Warhammer product that screwed up on lore detail? – you might imagine these conversations are difficult. Apparently not.

“Sometimes it’s us presenting our ideas to them and going, ‘we think this is needed to fit this faction, and give it this particular tool to work with’, and they’re quite happy that we present that and go forward with that,” Richard Aldridge, head of the new content team, explains. “There’s definitely interplay between us at times. Certain factions might get that more than others, but we like to lead with what we feel is appropriate for good gameplay. They are very receptive, in that we’ll say: ‘we need this, for this reason’, and they’ll go ‘no, that’s not quite [right], but we understand you have a problem here, so let’s try and solve it collaboratively’.” 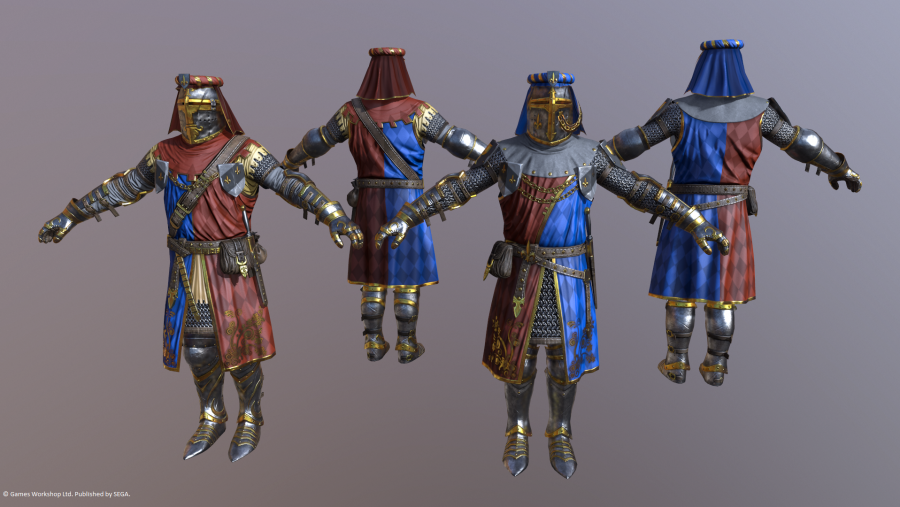 It helps that, according to lead character artist Baj Singh, “we look at units that already exist. Although not every unit is in the army book, or might not actually exist as a miniature, you have some units that are described in the lore. So we’ll speak to Games Workshop and go, ‘hey, we can do this, are you ok with that?’.”

With respect to Royal Hippogryph Knights, I quote from page 191 of my eighth edition BRB (Big Red ruleBook): “the Bretonnian cavalry is unstoppable upon the open field, but it is also invariably in control of the skies above. Formations of knights mounted upon pegasi and hippogriffs will challenge and engage the skyborne lords of the enemy force before diving down to impale the rank and file of the foe.”

On the tabletop, Hippogryphs have been a uniquely Bretonnian mount ever since Games Workshop put King Louen Leoncoeur on one in the game’s fifth edition. In the lore, enterprising (or foolhardy) peasants brave Hippogryph nests in the Grey Mountains to bring back an egg so their Lord can rear and tame its occupant. 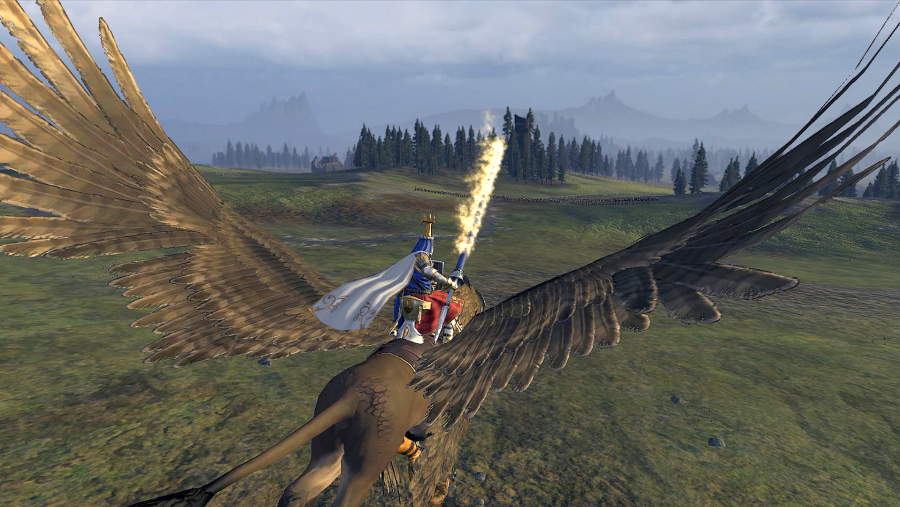 So “from a visual standpoint, it’s iconic,” project art director Greg Alston says. “The Bretonnians have always had their own version of a really nice mount for their Lords to ride, so it’s a nice differentiator, especially with the Empire’s [mount]. They’ve got something slightly different, which gives a bit of flavour. It’s also interesting to animate.”

After their update, Bretonnia became one of Total War: Warhammer’s strongest aerial armies. Despite its justification in the lore, this raised a few eyebrows, partly because it was achieved by making a whole unit out of what had previously been a Lord mount.

“We did want to give them some air superiority, because of the Pegasus Knights they already had,” Aldridge says. “We knew that the Hippogryph, as a mount option for their lords, was pretty strong, so we were very conscious that this was going to sway that. Of course, this was before High Elves” – another airborne army – “but yes, it was a conscious decision to give them that boost.” 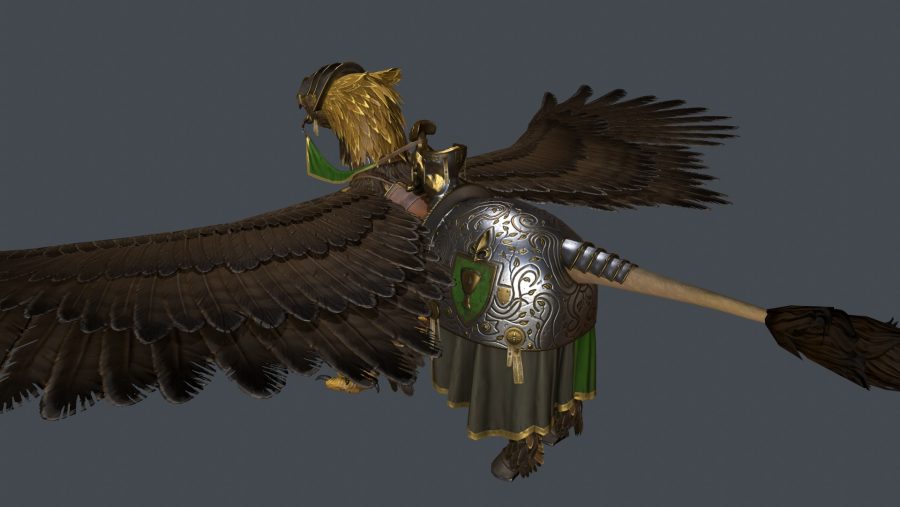 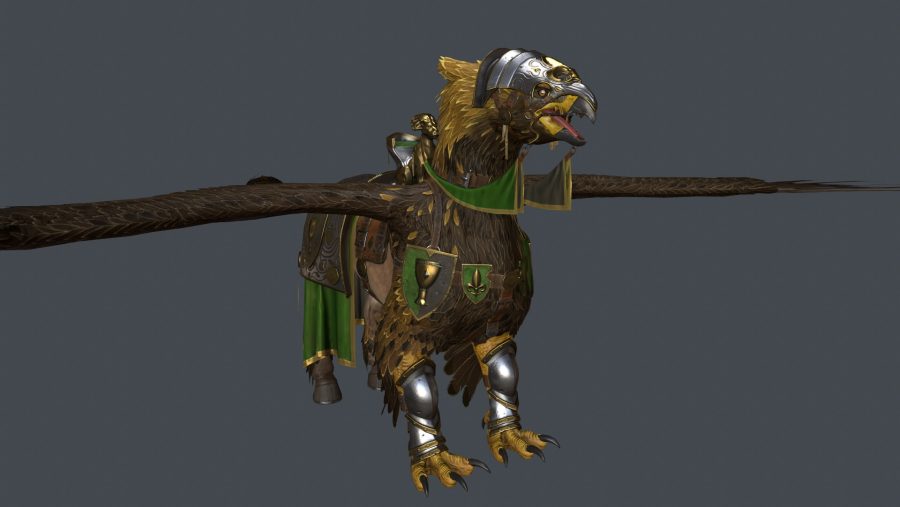 From Hogwarts to the Old World

Games Workshop has never had to figure out how its creatures move. This gave Creative Assembly licence to get creative, and dialogue on the subject went fairly smoothly, especially as Creative Assembly could take inspiration from other fictions. “We will reference films,” Alston says, “and Harry Potter’s got Hippogryphs in there. So if it relates to something like that, so people think: ‘oh, that’s how a Hippogryph moves’, [Games Workshop] is like, ‘yeah, that’s fine’.”

This spills over into animation, Alston says. “With the Hippogryph – what is it? Half of it’s a bird and half of it’s a horse, so when it came to animating creatures like that, you’ve got to make sure it doesn’t become schizophrenic: like it’s a bird in this animation, now it’s a horse in this one. You’ve got to be consistent, especially if you’ve got multiple animators working on it – someone might be doing a run, another’s doing some idles.”

In the tabletop game, the stats of the character riding the mount are applied in combat, which implies they’re making an equal contribution to the battle. This always bothered me: given most of these monsters tower well above head height – hippogryphs, griffins, dragons – can the character even reach?

“Yeah, we’ve made the call that it’s the mount that does the attacking,” Alston says. The rider’s weapon “is kind of a prop – it gives an indication that they can use it, but really it’s the hippogryph that attacks, with its talons and claws.” 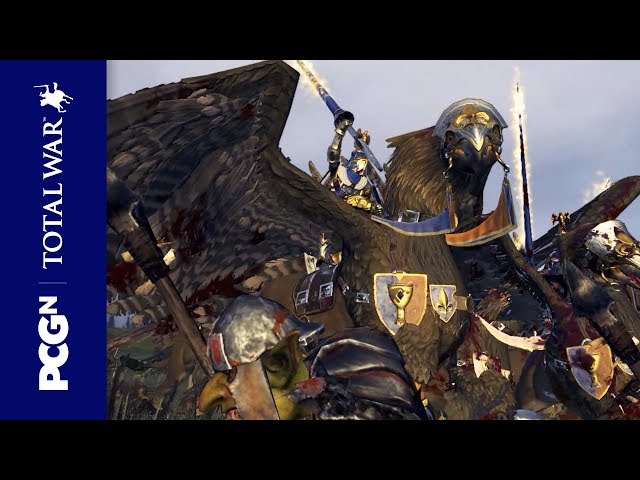 I really hope there’s a scrapped animation of a knight leaning down from a hippogryph’s neck to poke at something with a lance, but Alston says it was obvious from the beginning that it was a non-starter, “just because of the size of it. Maybe a lance is fine, but riders with swords can’t physically reach other characters. So mounts above a certain size have to do the attacking.”

“If I was riding a hippogryph, I wouldn’t want to poke someone with a lance, I’d want to set the hippogryph on them,” adds lead technical animator Lee Dunham. 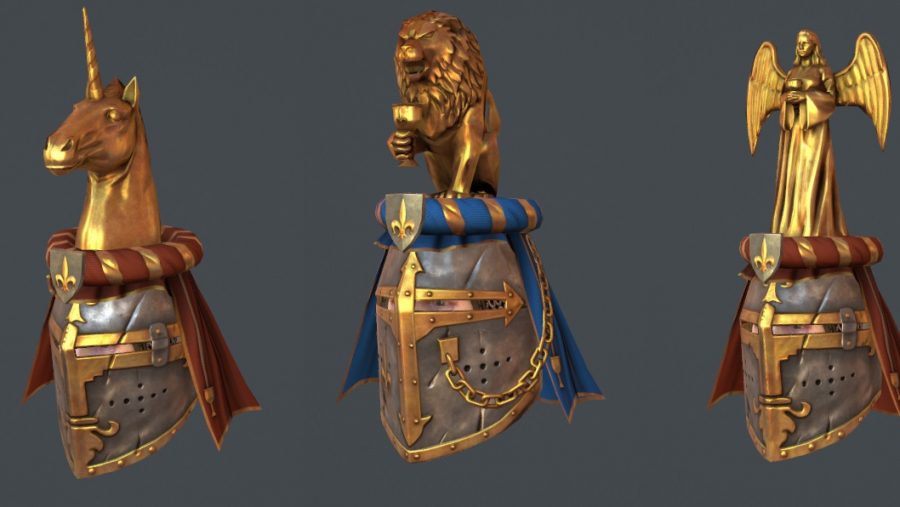 “We also consider what looks most impressive,” Singh says. “Where do you want to focus your time? Do you focus on something that’s going to be seen at this scale, or that’s going to be seen at this scale? You can zoom out so far your characters get small very quickly, so let’s go for the most exaggerated animations we can. If they have the same impact in terms of design specs, but you can make it look more visually impressive for the same amount of time, why not go for the most impressive-looking thing?”

Plan ahead: The best strategy games on PC

This ethos probably explains why Creative Assembly has added one of Warhammer II’s new matched-combat animations “against the new infantry where [Hippogryphs] will fly through and pick someone up and then drop them on the ground.”

But such air-to-surface interactions – let alone the air-to-air ones – caused a lot of headaches. Total War: Warhammer saw CA make flying units – such as gyrocopters – for the first time ever, and it posed a host of brand new challenges. Some of the thorniest occurred around animations just like this, in which flying units must interact with the ground.

“Flying was completely brand new to the game’s mechanics,” Alston says. “From an animation point of view, we had to deal with different heights, which adds so many complexities. We’ve got to think of attack animations when they’re flying against other flying units, and then how they deal with ground units. We had to do a completely new system to deal with those behaviours. That was quite a big challenge.”

It raises questions like: “Do we want things to collide differently in the air? And then, how do we go about that?” Dunham adds. “Then you go through the iterative process of testing: you get animators to test that process, try animations, go to programmers try and fix the bugs.” 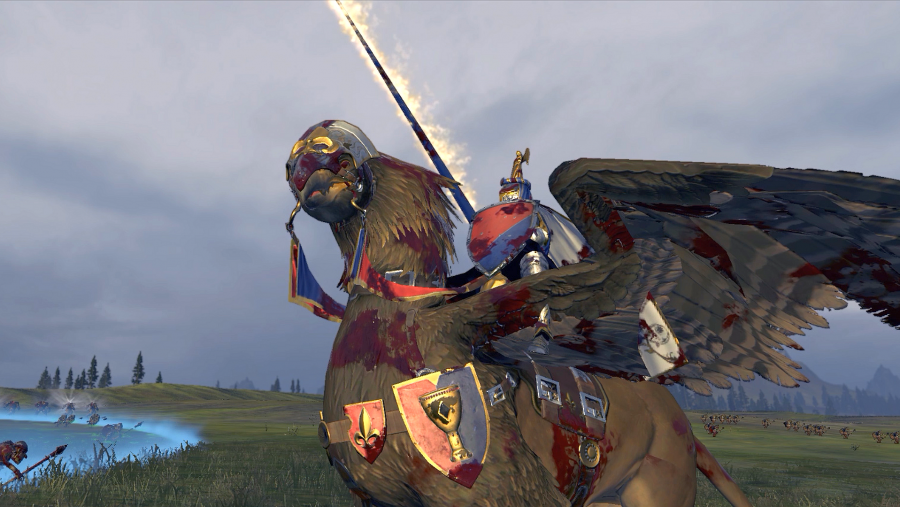 Watching the results of this work in-game is stirring. The defining image of Bretonnia is one with a universal ability to quicken pulses: a thunderous cavalry charge. In the way they fly, dive, and attack, Hippogryph Knights are regal, disciplined, and yet fierce, adding an appropriately fantastical (and lore-sensitive) aerial dimension to this image. They’re an excellent centrepiece unit for a faction that never actually got one on the tabletop – speaking as a Bretonnia player, it’s much better late than never.