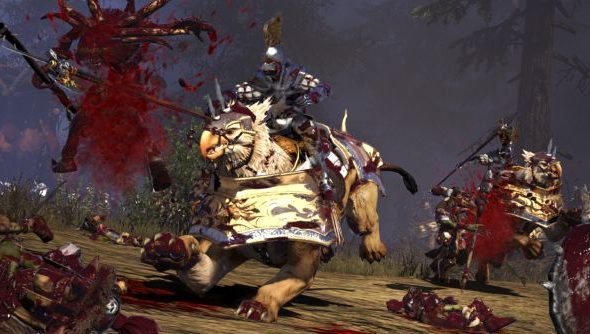 There’s, somehow, more death coming to Total War: Warhammer. The Blood for the Blood God DLC upgrades the cosmetic combat capabilities of everyone involved to more accurately cut troops to ribbons. Similar ‘blood effect’ packs have been released for previous games, an added extra to help keep the rating of the base game down but more accurately represent the horrors of war for those who want it.

Do more leaking guts help make Warhammer one of the best strategy games ever?

Which, as the trailer below shows, it really does.

The DLC is live this very second, and as well as the cosmetic ‘improvements’ it also brings events to the campaign map meant to, and we’re quoting here, “encourage slaughter across the world.” What a meany the Blood God is. Head to Steam if you want to attempt to appease him.

The first Total War: Warhammer patch has also gone live simultaneously, adding some new units for free and issuing a massive balancing pass across all factions. We’re yet to hear when the game will get its first properly large content expansion, though a new playable race is coming for free later down the line.