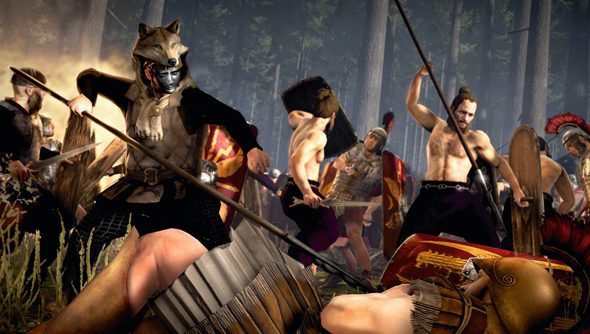 Creative Assembly visited Valve recently and were pleased to discover that Rome II and the Steam Controller got on like oddly fresh-faced old friends. A SteamOS-native version of the game seems like the next step on the developer’s march to living room conquest, and brand director Rob Bartholomew told PCGamesN that they’re “confident” they can pull one off.

“There’s absolutely no reason why not.”

“It’s not something that’s ever particularly worried us,” said Bartholomew of the porting task ahead. “We port to Mac already, so we’re kind of used to porting Total War to other OSes – or at least our partners at Feral who do that Mac work for us, that’s certainly something we’re very familiar with.

“We’ve certainly got no worries about Linux as a platform, and as you know, we’ve appeared on the SteamOS page, and our intention is absolutely to support the OS.”

While CA haven’t discussed any potential issues with Valve, Bartholomew says the Steam team’s door is “regularly open” to the studio.

“If we ever did have any problems with that we’d certainly solve it with them,” he said. “We’d obviously want to make sure that if we released a version of Rome II for SteamOS specifically, that it worked really nicely with the infrastructure that they’ve got planned for that.”

There are question that remain, however – for instance, how much time the studio can afford to spend porting the Total War back catalogue for SteamOS. Barthomolew imagines that CA will examine the success of Rome II on SteamOS before tackling other games in the series, but they’re certainly not lacking in incentive: previous Total Wars shifted two million units in 2012, and the number rises year on year.

“I think the great thing about Steam for us as a distribution platform and certainly for the older games in our back catalogue [is that] they’re not in the budget racks in Games anymore,” said Bartholomew. “Well, they probably are in the UK but certainly in a number of other territories I’m sure they aren’t.

“We’ve always strived to be at the front of technological advancement and Medieval II is still a damn fine game by modern standards, and it’s still one of my favourites and I play a great deal even today – so it has that level of popularity.”

Whatever the eventual details, Creative Assembly are “thrilled” by the prospect of a SteamOS.

“Sure, Total War’s going to be a bit more desktop based than your Call of Duty or any other first person shooter out there [that] is going to appeal more to the kind of person who wants to sit down, but it’s great to have that extra avenue,” concluded Bartholomew. “I went from a sceptic at the start of our visit to Steam to thinking they’d definitely got something, and something like Rome II is not out of its depth at all in that kind of environment.”