Creative Assembly didn’t think much about the original Rome as they set about creating its sequel, they said at a GDC preview event last night. They explained they’re not a backward-looking studio. Whenever they tackle a new game, they start by taking a close, fresh look at the era and subject matter and let that determine their direction. But as I watched Varrus’ legions perishing in an ambush in the Teutoburg Forest, beset by attack dogs, flaming boulders, and fire arrows, it looked like Creative Assembly’s investigation led them to a similar vision as the original’s.

We only saw a standalone tactical battle at the event last night, and that’s always been the most consistent part of the series. The battle between the harried Roman legionaries and German light infantry would be familiar to anyone who played the original Rome, but the size of battlefield and the number of geographic features. Where most Total War battlefields usually have one or two defining features (a large ridge, a forest), the Teutoburg battlefield looked both more diverse and more expansive. Roman troops had to fight their way over broken ground, capturing several hills, fighting in clearings and marshes, and surrounded by a broader range of forested hills packed to the treetops with Germans.

These sorts of battlefields will make a better dance floor for Rome 2’s expanded, 40-unit army sizes. To help cope with the challenge of command, Rome 2 also features a new tactical map in which players can control their army from a high-altitude top-down view that transforms the units into coloured blocks crawling across the landscape. It’s a bit like looking at a battle map in a military history book, and will be a tremendous help for those titanic clashes that sprawl across the landscape.

Beyond that, Rome 2 looked much like its predecessor, albeit far more lavishly detailed. The Hollywood touches are alive and well (per Total War tradition, there is a Zippo for every archer, and people burst into flames at the drop of a dime) and the Roman legionnaires respond to orders with barks that sound like they are about to start declaiming. 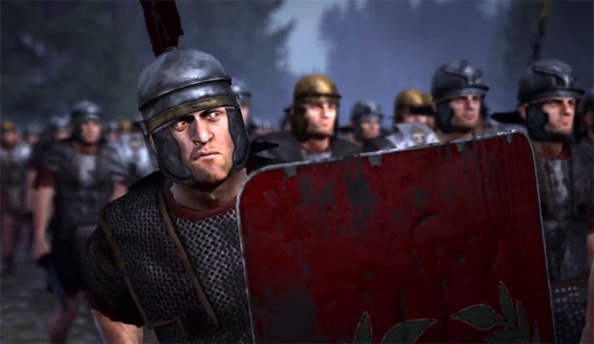 The most exciting sounding additions were only discussed during the presentation, not demonstrated. Not only will Rome 2 feature 117 factions (likely less impressive than it sounds, given the plethora of tribal peoples that populated the Roman world), but we also heard about Creative Assembly’s interest in putting the focus on armies, not individual units. Roman legions will acquire traits that reflect the history you create with them, for good or ill, and the strategic layer supposedly emphasizes politics and intrigue more than we’ve seen in previous Total War games.

The one thing that concerned me was Creative Assembly’s emphasis on numbers and scale in the Rome 2 presentation. Rome 2 may be pushing seven thousand polygons per unit and feature hundreds of them, and it may boast the largest development budget of any prior Total War game, but the Total War series has always been at its strongest when it is focused. Napoleon: Total War was much better than Empire, and splitting Shogun into three main chapters helped with pacing issues and technology progression. Rome 2 covers Roman history from the Punic Wars through to the “height of the Empire”, a huge span of years, technologies, and conflicts. The trick for Creative Assembly will be to create a game that takes advantage of this epic setting, but does not become lost in it. As Varrus and Rome discovered to their regret at Teutoburg forest, sometimes it pays to know when you’ve gone far enough.