Italy is a hot mess of warring factions, invaders bash at the gates of Roman towns and the plebs are causing a ruckus. Total War: Rome II’s prologue, ostensibly a long tutorial, throws players into a war against Rome’s neighbours, the Samnites. The goal: rescue a captured Roman VIP and, along the way, carve off a nice chunk of Italy.

After fiddling around with it for an hour in Rome itself, a code was thrown my way, and I’ve been messing about with burly men in skirts and knocking down walls for a few weeks. So it’s pretty much been like a long Saturday night in Glasgow.

Rome II begins the way it intends to continue: with a huge battle. Capua is under siege, a veritable horde of angry Samnites are attempting to crack the walls and get into its gooey centre, and I’ve got to save the day with a few untested units. It is a dramatic opening sequence, with screaming men charging out of woods to assault siege engines, a perilous river crossing and a desperate attempt to halt the enemy advance beneath Capua’s towering walls.

Rome’s quite the looker – enhanced by a plethora of tiny details from the abundance of flora and vegetation to units that seem like they are made up of individuals – with different armour and a large range of animations – rather than faceless, identical soldiers. 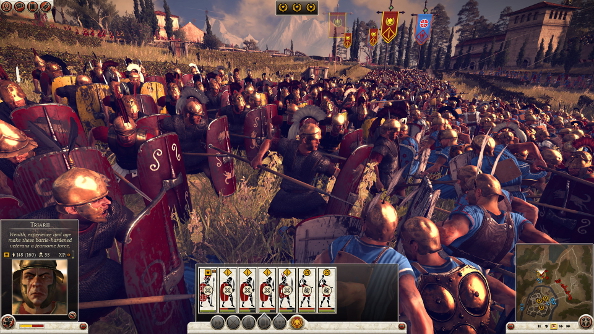 Locked onto a unit of spearmen, I follow them as they ram into the enemy line. The camera shakes as they speed towards their foes and as they slam into that mass of shields and men, the din of metal striking metal and shrieking, dying men is absolutely deafening.

Though this initial battle deftly showcases the impressive cinematic nature of Rome’s scraps, it doesn’t shy away from being tactical affair. Battles still boil down to a game of rock, paper, scissors (spears beat horses, horses beat skirmishers etc), but more attention has been given to how one commands their army. Zooming out as far as possible, the map changes to a tactical display revealing the entire battlefield with units represented by colour-coded blocks. From this position, selecting troops, doling out new orders and checking enemy positions is substantially easier.

With the battle won and Capua saved, I find myself staring at the campaign map. It’s a gorgeous expanse of snow-capped mountain ranges, verdant plains separated by forests, and growing settlements. From there, armies are recruited and moved, research is embarked upon, economies are planned, edicts are passed and all-important wars are started.

Samnium might have been defeated once, but that wasn’t going to stop its armies pouring out of the south in an attempt to capture Rome. To protect the road north, I position my victorious legion on a path that cut through a forest – the only route the enemy could take. My force is a tad small, however, so adding more units to it is a necessity. They might also be using wooden swords, so I should probably rectify that. 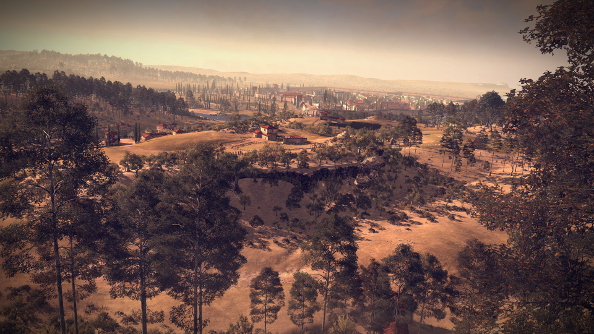 Recruitment is an extremely simple affair in Rome. Units are added by selecting the army and then the preferred unit from the list of available ones, defined by the buildings in the nearest city. Although they take a turn or more to be recruited, there’s no need to wait from them to travel from the barracks, as they instantly appear in the army they moment they’re recruited. Not only is this convenient, it means that individual units won’t be stuck on their own, slowly making their way to the main force, vulnerable to attack.

Most units require technology to be unlocked and buildings to be constructed before they can be recruited. Two tech fields, each with three trees, can be researched, representing civic and military ideologies. The military ideology encompasses army management, tactics and siege warfare, while the civic ideology is split up into the economy, philosophy and constructions trees.

Adding new buildings to a city requires physical expansion, limiting what can be constructed and inspiring specialisation. To ensure the survival of my increasingly large army, I pop over to Capua and expand the city limits and make room for a workshop where new armour and weapons can be crafted. New city walls sprout out of the ground and tiny buildings fill in the space within these fortifications – it’s like watching the opening credits of Game of Thrones

With preparations made, all that’s left for me to do is select a stance for my army. Stances are integral to army management and provide significant bonuses. The raiding stance increases income, for example, limiting the costs of fielding an army, and it increases the men’s morale while upsetting enemies. Being the last line of defense against an invading force, I place my troops in the fortify stance, where they gain a large defensive bonus and a lovely new fort. Fort Fraser, I call it, because I’m not blessed with a great imagination. 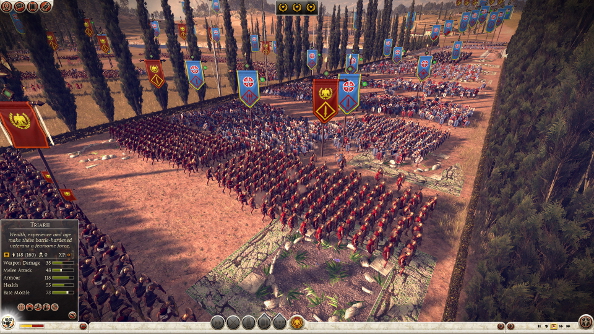 Forts don’t just add defensive structures, they also give players an actual target to defend. Much like a town, forts have victory points at their heart, and if these points are captured by enemies, the victory counter is rapidly reduced and the battle is lost.

Luckily, the Samnites didn’t have a hope in hell of breaking my defensive line. Placing my troops just behind the lip of a hill, not only were they invisible to the enemy, I had the higher ground. And, as Obi-Wan teaches us, that’s a good place to be. The Samnites slowly march through the marshlands, becoming increasingly exhausted, and just when they spot my units, my cavalry thunders out of the forest on their flanks, crushing their skirmishers.

All of these victories have given my general and his men an abundance of experience, so it’s time to go on a wee spending spree. Generals can learn new abilities that inspire or otherwise affect their troops, like improving their combat ability, as well as ones that impact their civil governing skills, making them better governors. Their entourage can also be increased, though these are not Hollywood clingers on. Siege engineers, witches, enemy turncoats – there’s a long list of folk eager to enter a general’s household and augment their skills.

Legions can be similarly customised with army traditions improving their melee skill, making them better skirmishers, speeding up their movement speed and what have you. Several traditions can be adopted by an army, and if they should fall in battle, another force may take up their banner and carry these traditions on. I opted for a boost to my legion’s skill at simply hacking things with swords, getting one step closer to making my specialised killing machine. 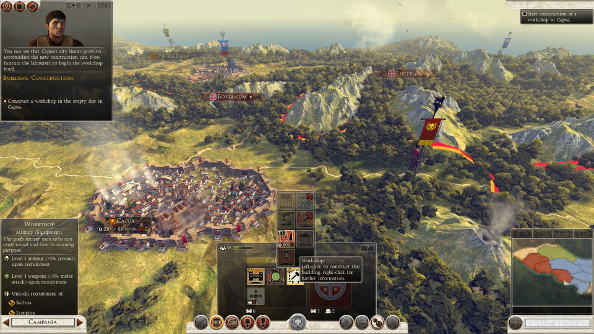 A few battles and a conquered town later, and I was planning my first amphibious assault. Surrounded by mountains, my target was only accessible by sea. Instead of constructing vessels, I just move my army into the ocean and it automatically turns into a fleet of transport ships. Targeting the coastal town, the battle begins with my fleet gently bobbing in the sea.

Most of my ships make it to the beaches, but one lags behind the rest and is rammed by a Samnite vessel, halting its progress. Projectile’s launched by the opposing ship’s troops pepper my vulnerable men, and before it can make landfall the deck is covered in corpses. The battle ends in yet another victory for the Romans, but not without significant losses.

Before long, I was at the gates of the Samnite capital. My sneaky little spy informed of their defenses and poisoned the enemy general, so all that was left for me to do was bring my battering ram to bear and finally end Samnium’s hold over central Italy once and for all. 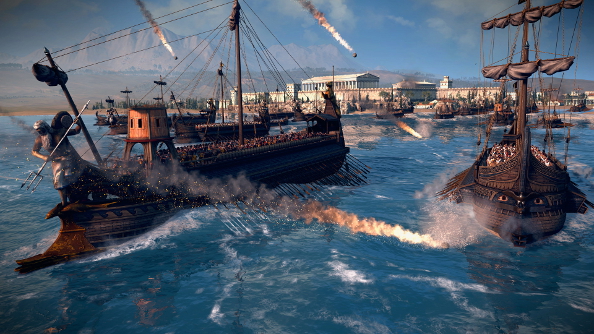 Capitals have far more defenses than the average town, but they also have multiple victory points, giving an army more options for entry and conquest. My battering ram, surrounded by my legion, slowly made its way under an imposing aqueduct that ran straight across the map. The battlefield was covered in thick fog hiding our movements from the enemy, so when the first defender fell from the walls, that was the first the Samnites knew of our presence.

My men poured in through the destroyed gate in column formation, one of the many formations that can be switched to on the fly, quickly surrounding the surprised enemy. The main forum, dotted with statues and surrounded by temples and civic buildings, was quickly filled with a sea of armoured soldiers, and within minutes not one Samnite was left standing. Rome was victorious, and the prologue came to a close.

Despite being a short, more directed campaign than what will be provided by the meat of Rome II, the tutorial does a sterling job of teaching the basics while giving a distinct sense of place through its historical nods and the final cutscene containing stirring, if slightly cheesy, oratory. It feels familiar, both to the original Rome and Shogun 2, but appears to build on that solid foundation by adding a greater level of cinematic flair and a deeper tactical and strategic experience. After playing the prologue several times now, it’s safe to say that I’m going mad waiting for the full game.

Rome II is available via Sega to pre-purchaseahead of its September 3 release date.