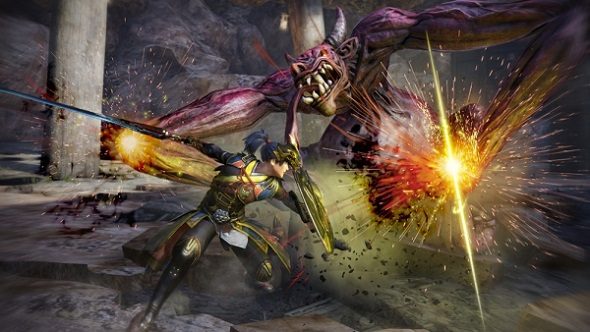 Ahead of its launch in late March, Koei Tecmo have released two new trailers for their feudal Japanese monster hunter, Toukiden 2. These trailers show off two new weapons available to would-be oni hunters: the chain whip and the sword and shield.

The chain whip is perfect for those who like to attack from a distance while the sword and shield is a great beginner weapon, offering a suitable mix of offense and defence. In the two trailers found above and below, you can see these two brand new weapon types in action against your garden variety spider demon.

Toukiden 2’s sword and shield has a moveset somewhat reminiscent of the sword and shield found in Monster Hunter, with users being able to perform quick hit and run attacks, before rolling away or ducking behind the shield. However, the sword and shield in Toukiden 2 allows the user to switch between stances, holding the sword in a reverse grip to use hard hitting slashes. It looks perfect for players who like to quickly engage and then disengage from combat in order to charge up a powerful strike.

The chain whip is suited for those who like aerial combat, as users can grapple onto oni and launch themselves high into the air to continue their onslaught. Its range allows hunters to hit opponents both on the ground and in the air, great for taking out flying oni. It also has some kind of projectile attached to it as well, with the player in the trailer being able to attach purple chainlinks to the oni which can later be denoted to do more damage. The lacerations this weapon can inflict should suit anyone who is trying to chop off certain limbs to collect materials for new weapons or armour.

For those who have never touched the Toukiden series, the enhanced port of the original game is currently available on Steam for 50% off, costing $29.99/£24.99. If you’re already a dyed in the wool oni slayer, Toukiden 2 is coming to PC on March 21 in North America and March 24 everywhere else.