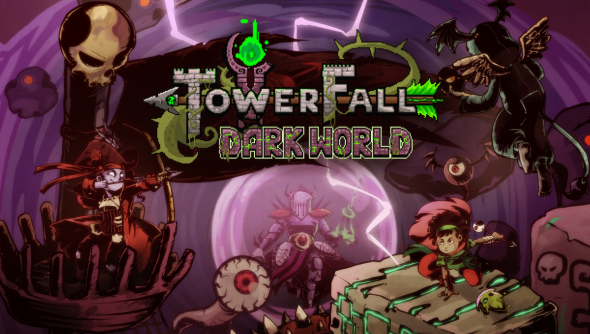 I didn’t know I was interested in TowerFall until I tried it with the PCGN lot – me on an Xbox controller, Matt on a PS4 pad, Jules playing keys – and discovered with no small delight that I’m oddly good at it.

The expansion will be out on Steam, GOG and the Humble Store today at a price point of $9.99.

The co-op mode brings TowerFall players together to fight bosses. They’ve ten new colour-coded characters to play as, including the red Crimson Corsair, purple Vicious Vanguard, cyan Prancing Puppet and white Sacred Sister. They’re not all alliterative, if that sort of thing upsets you.

New trigger arrows can be exploded from a distance, and prism arrows trap their targets in a magical prison.

For a glorious half an hour before Christmas, a few of us made like Spelunky arrow traps and bopped heads like Mario. And then we went back to our respective homes and never picked it up again, because local co-op.

Have you played much Ascension? TowerFall sales are good on PC, but even better on PS4.