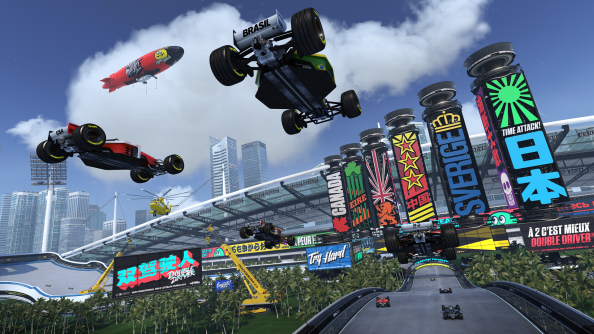 Pure fun. Fun squared. That’s Trackmania – so the question of what a sequel actually needs to add or, you know, do, to be considered a success, is actually quite tricky. Would it be enough if Trackmania Turbo revamped the graphics of 2011’s The Canyon and delivered a suitably voluminous dump of new tracks? Probably, in all honesty. If it ain’t broke, don’t reimagine it as a F2P MMO.

Looking for feels on wheels? Try one of the best racing games on PC.

What Trackmania Turbo does on top of that is add modifiers to the established, and still massively enjoyable, formula. Some are obviously signposted, like the new Double Driver local co-op mode in which two players control a car by committee, each of their acceleration and steering inputs having a 50% say on the behaviour of the car. Others, like the treasure chest of secret modes accessible via a series of three-button presses in the Super Secret Game Menu, are a bit harder to find. A bit more – brace yourself – wacky.

If that word conjures up the image of something an over-caffeinated YouTuber – or their spiritual originator Timmy Mallet – might enjoy, those secret modes are a good deal better than you’re thinking. 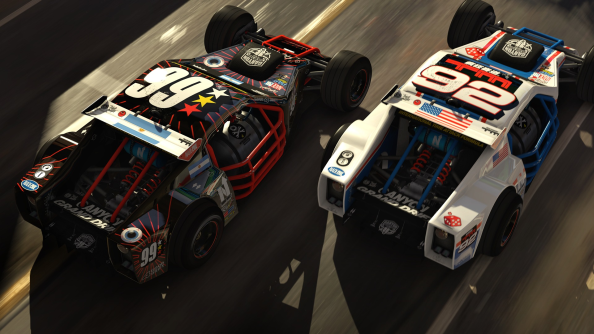 Chipping away at your own ghost in an advanced track – while rewarding, and still accounting for the meat of the late-game – is actually quite fatiguing after a while. With these secret modes, Nadeo offer an in-game stress toy. They remove the imperative to nail a perfect run and let you race with abandon.

Four-player, same-screen races, for example, have a camera that isn’t tied to any particular car. It’s simply a track flyover, so anyone who falls behind loses a point. Lose 5 points, and, a la Micro Machines, you’re out. It’s a setup that immediately tells you you’re not going to have to worry about ideal lines anymore. Collision is active, so every round I played of this descended into a frenzied attempt to knock others off course with the last miliseconds of your on-screen time.

Bonus mode turns Trackmania into Mario Kart. It’s rags-to-riches-to-rags gameplay. The camera’s a much more reasonable 4-way split here, but what would otherwise be a traditional three-lap race is transformed by big car, small car, speed boost and projectile power-ups. The projectiles are actual cars that you hurl at each other, and they don’t just magically disappear after use. Which means lap three is a drive through a wrecking yard of dead cars. It’s great. 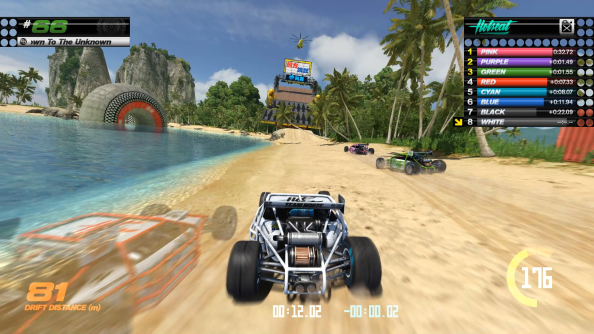 Smash mode, in which acceleration is achieved by mashing a button rather than holding a trigger, also wears its Nintendo influence on its sleeve. It’s a shorter distraction, this one, best served for getting one over on a mate who’s technically superior to you but didn’t put the hours in with Track & Field in their youth, and thus never mastered The Spasm.

The last of these lighthearted variables I played – there are more that have yet to be discovered – was Stunt Mode, which is absolutely as you’d imagine. You flail your car wildly around in the air to accrue points, build up speed with a boost function when you’re on the ground, and see whose cartwheels and flips earned the highest score at the end. The physics are actually pretty convincing, as in-air car behaviour always was within the cartoonised confines of the series, but there’s limited scope for pulling off anything inventive, since you only have two axes of movement.

The heart of the matter is still campaign mode, though. As ever, the most fun you can have with Trackmania Turbo is in crafting that minute or so of absolute perfection, restart by restart, then finally executing it with surgeon’s precision and watching yourself ascending the global rankings.

N.B. I’m currently inside the top 250 globally, a position I expect to slide somewhat once more than 1400 people have played it. 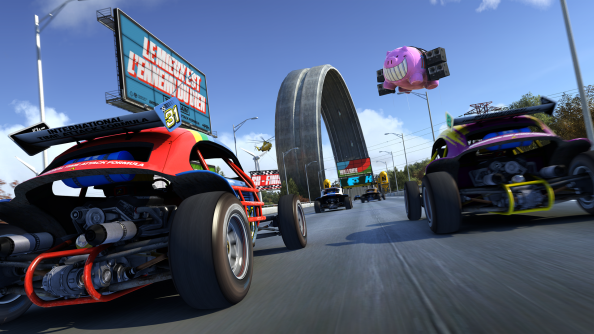 There’s greater definitionto Trackmania Turbo’s track types than in previous iterations: Canyon Drift, Lagoon Rollercoaster, International Stadium, and the rather unfortunately titled Dirty Valley. The defining elements of each have been present in Nadeo’s previous titles, but this is the first time they’ve been grouped with such clarity. If you enjoy the gravity-defying circuits that throw you into first-person cam and flip you upside down until you’re queasy, Lagoon Rollercoaster is where you’ll plug away for golds. For off-road, it’s the aforementioned Valley. Canyon Drift gives you the space to hang the back end out, and International Stadium is Trackmania of old, all about carrying the extra thousandths through each high speed curve by nailing the perfect racing line.

Really the only noticeable change or addition to the established Trackmania handling model is that of the offroad buggy. Unlike all the other vehicles, it doesn’t feel as though it’s generating superhuman downforce to suck you down onto the track. It feels bouncy and unstable. Terrifying, if you’re chasing the gold and at the mercy of an uneven dirt jump.

Would it have been enough to spit-shine the graphics and throw in new tracks – probably. But it wouldn’t have been quite such a raucous and focussed arcade experience as Trackmania Turbo’s end result. In a sadly limited driving game market, it’s encouraging to see that there is still room for colourful, accessible, outright impossible racers alongside the likes of Dirt Rally and Assetto Corsa. When the game releases on March 25th, long-maligned genre fans have the opportunity to relive an almost bygone era of brake-shy, restart-heavy racing.