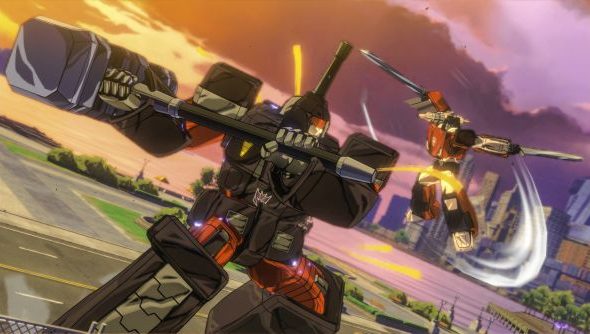 Up until roughly an hour ago, I wasn’t aware that Transformers: Devastation was coming to PC. I’d managed to make this assumption so early into my knowledge of the robocar action spinkick-em-up that I’d never even had the chance to get hype and then disappointed about it. So now I am a frothing torrent of excitement for a game where I get to be Optimus Prime and kick robots to death and then turn into a truck and drive away. YES.

It’s the hopefully-excellent work of Platinum Games, who you may have played in the form of Metal Gear Rising: Revengeance at some point last year, or one of their console efforts if you’re a dirty traitor. Like everyone else with a pair of semi-flexible thumbs, I’m a huge fan of Bayonetta, Vanquish, Revengeance and basically everything else Platinum have put out that isn’t based on the Legend of Korra. Sadly that last franchise proved not to bring out the best from the japanese developer, and we can only hope the same isn’t true here.

I can’t really imagine being disappointed once I have my hands on this though. Clearly from the trailer you get to hit robots with your robot, perform complicated and fun combos then watch them all explode into bits. Sure, I’d love a deep plot, lots of collectibles, interesting level designs – but if the combat is like what I see above and nothing gets in the way of me enjoying it, I don’t see how it can go too wrong.

I look forward to being right or being dashed against the rocks of learning just how bad things can be on October 9th via Steam.