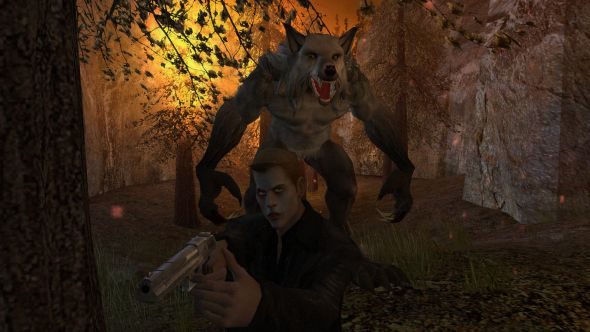 Ah, what could of been. As you’ll learn in our full interview with former-Troika, former-Blizzard, now-Obsidian writer Leonard Boyarsky, he’s been involved in quite a few cancelled projects over the years. For me, the most fascinating was a Werewolf-focused follow-up to the brilliant, flawed Vampire: The Masquerade – Bloodlines.

For the best RPGs ever made, we’ve got you covered.

As part of a longer discussion on the final days of Troika Games, which Boyarsky founded along with Tim Cain and Jason Anderson, he mentioned one of the demos they put together was a prototype for a Werewolf game.

“We did actually make, I forget how far we got, we made I believe a workable prototype of one small little area that was like a Werewolf version [of Vampire],” Boyarsky explains. “We made a game where you could turn into a Werewolf or you could be a Werewolf, but it was only one small area using a lot of the assets if not all the assets from Vampire.”

He didn’t elaborate further, but it’s the follow-up everyone wanted at the time, and significantly hinted at by questlines in Vampire itself. Troika going under put paid to that. Of course, it is happening now, though by an entirely different studio, Cyanide, published by Focus Home Interactive.

Do check out the full interview for more – loads more – in a similar vein.

{"schema":{"page":{"content":{"headline":"Troika’s Vampire team started work on a Werewolf game before they shut down","type":"news","category":"vampire-the-masquerade-bloodlines"},"user":{"loginstatus":false},"game":{"publisher":"Activision","genre":"FPS","title":"Vampire: The Masquerade - Bloodlines","genres":["FPS","RPG"]}}}}