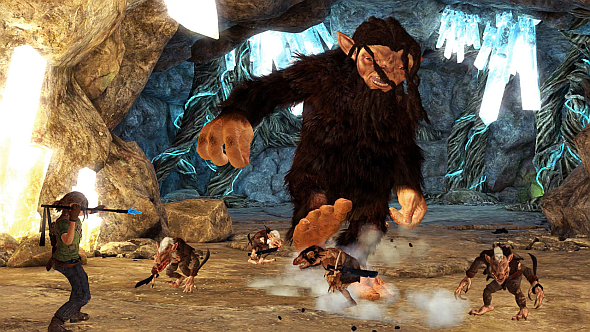 Troll and I is a character-switching adventure game with crafting, combat and puzzle-platforming elements, and it’s now available on Steam. Much like The Last Guardian, or Brothers: A Tale of Two Sons, you’ll guide two protagonists with different abilities across the majestic mountains and lush forests of Scandinavia.

Intrigued? Check out our preview of Troll and I for some more thoughts.

Teenager Otto is driven from his home by a band of ruthless bounty hunters, only to discover their quarry first: the titular troll, inventively named ‘Troll’. With the bounty hunters hot on their trail, they must work together to escape, and naturally a strong friendship forms as they do so. You can play solo, or with a friend in couch co-op.

Troll can crush enemies in a single blow and carry heavy loads to help Otto navigate the terrain, while Otto is stealthy and nimble, able to squeeze into small places. Besides the sneaking, fighting and puzzling, you’ll also be able to gather materials and craft weapons needed to confront more fearsome enemies, such as mythical orcs emerging from the depths of the Earth.

“As our first release of 2017, Troll and I kicks off our ambitious year with a splash. We are thrilled to bring gamers into the expansive world of Otto and Troll,” says Christina Seelye, CEO of publishers Maximum Games. “Troll and I is an adventure that tests a unique friendship, and promises an exciting and surprising experience for players.”