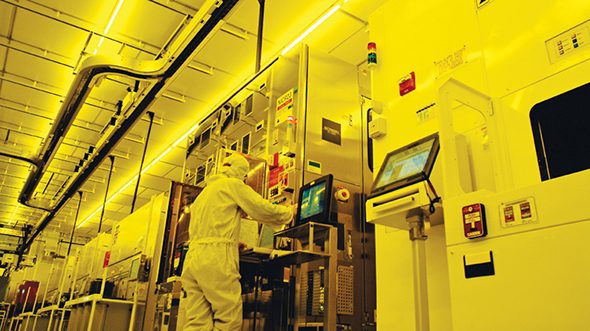 A bad batch of photoresist chemicals delivered to Nvidia and AMD semiconductor foundry, TSMC, will cost the company $550 million in Q1. One of TSMC’s chemical suppliers has a lot of explaining to do after an “abnormally treated” component caused TSMC to scrap thousands of 12/16nm wafers produced at its Fab 14B facility.

The reports of TSMC’s unfortunate chemical cockup first made the rounds in January, with the pure-play fab confirming later in the month that poor quality chemicals had contaminated heaps of wafers. After managing to halt production and contain the foreign polymer before it did any more damage, the company had expected there to be no adverse impact on its Q1 financials as a result of the incident at its Nanke Technology Park.

But that’s no longer the case. Lower-than-expected yields discovered towards the end of the manufacturing process has now led to TSMC scrapping higher numbers of wafers than first estimated, resulting in a reduction of Q1 revenue by $550 million. This is later to be made up in Q2.

It’s not all bad news for the fab, however. With a little adroit production shifting TSMC is making up an additional $230m in Q1 from elsewhere. You know, that $230m you keep in the cookie jar in case of a burst pipe or catastrophic wafer damage.

TSMC and me: These are the best graphics cards

The foundry’s guidance has been revised from $7.4bn to $7.1bn for the quarter, with gross margin also dropping a few percentage points as the fab makes up for lost ground.

That’s still a whole lot of change lining TSMC’s pockets. Aside from mammoth orders from the likes of Apple and Qualcomm, the company has hoovered up business from some of the most prevalent PC gaming component clients in recent years for their flagship products. This includes: Nvidia’s Turing GPUs, AMD Zen 2 7nm chiplets for EPYC and Ryzen 3000 CPUs, Radeon VII, and AMD Navi.

This latest incident now dwarfs last year’s infamous virus drama, in which a ‘misoperation during the installation process for a new tool’ cost TSMC $85m.

To prevent another chemical-gate (who doesn’t love a good gate), TSMC has announced it will “strengthen inline wafer inspection and tighten control of incoming material to deal with the increasing complexity of leading-edge technologies.” And probably shout at its chemical supplier a little, too.