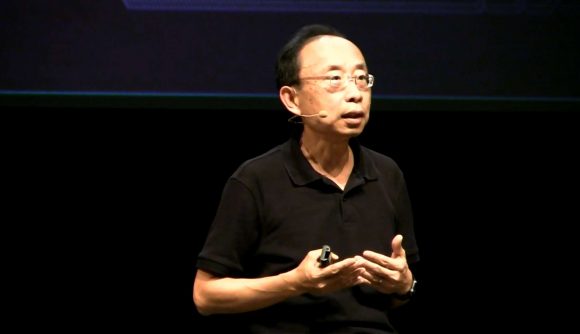 While John Carmack might think there’s only a couple of nodes left in silicon computing, TSMC’s vice president of corporate research, Dr. Philip Wong, is adamant that we’ll still see node after node, generation after generation, and that Moore’s Law is well and truly alive. Speaking at the Hot Chips conference last month he held a keynote called ‘What will the next node offer us?’ which he kicked off by categorically refuting the repeated prophecies of the death of Moore’s Law.

“So, I would like to state, without any doubt, that Moore’s Law is well and alive,” he says. “Right? It’s not dead, it’s not slowing now, it’s not even sick. It’s well in alive.”

I mean, obviously one of the lead VPs of the biggest contract semiconductor manufacturer – the company behind the production of most of Nvidia’s and AMD’s GPUs, as well as the bulk of AMD’s Ryzen processors too – isn’t about to call time on the quest for more advanced processor manufacturing. But Wong remains positive that the exponential progress of technology can continue.

But while both are nominally talking about the same theory, Carmack and Wong are coming at it from slightly different angles. Carmack’s essentially using Moore’s Law as shorthand for “computers just getting faster and faster” but Wong is digging a little more deeply into Gordon Moore’s original paper on the subject, with its beginnings as more of an economic law.

“If you think about Moore’s law,” says Wong, “it’s really about density device density…the cost goes down as the number of components increase at each of the generation. And that’s enabled by increasing device density from generation to generation.” 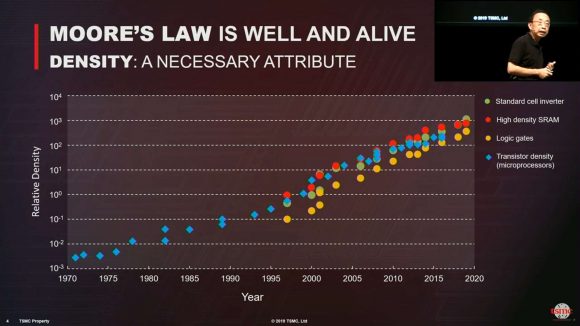 And it’s this continued increase in density which Philip Wong points to as the driving force behind the persistent life of Moore’s Law.

“So the fact that processor speed – clock speed – has saturated does not mean Moore’s Laws dead. Densities keep increasing, just like Dr. Moore has predicted many, many years ago.”

But Wong does conceded that maybe, just maybe some of the people prophesying the death of Moore’s Law do have a point. Talking about the FinFET, the current 3D transistor technology used to develop the latest graphics chips and processors, Wong points to the fin itself.

“The fin is about 10nm, slightly less than 10nm,” he says, “and if you use a very high resolution transmission electron microscope you can actually see the individual atoms. You can count them. You still need both hands and maybe toes to count the number of atoms in a fin but not much more than that.

“So, if you go by two dimensional device scaling – which is a really powerful knob that we have in making new transistors, in providing you density – if you go by two dimensional scaling by itself you quickly see that we’re down to very few number of atoms, and very soon you’ll run out of atoms. On the other hand, this powerful knob that we have been using is not the only knob we have at our disposal.”

Advanced materials, such as carbon nanotubes, used to build a 14,000 transistor processor at MIT recently, and different gate and packaging technologies will keep the pace of progress barreling along. Wong points out that the continued progression of Moore’s Law has always really been a history of innovation, where new techniques and materials have been discovered and incorporated into manufacturing to keep things moving.

“And, going forward,” Wong explains, “what we expect to see are more innovations in those directions, that provide you, from technology node to technology node, continuous benefits node after node.”