There’s been no small amount of debate as to the identity of Tyranny’s villain and evil overlord, Kyros. Obsidian’s latest RPG has a far different structure to their average fantasy fair, and the ultimate ruler of all creation – or soon to be it with your help – is mysterious. Everything from the pronouns used to describe her (though Obsidian prefer the feminine as a catch-all) to when her calendar starts is unknown within the world. The images in this article aren’t even of Kyros, the Overlord’s visage not being something made public yet. Why so mysterious? It’s all part of that world-conquering persona.

Read more: Playing at being evil in Tyranny.

“We are vague about Kyros’ gender because the average person in the world of Tyranny simply does not know if the Overlord is a man or a woman – and that includes you, the player character,” explains the narrative team. “You know Tunon, Archon of Justice and Bleden Mark, Archon of Shadows but you (the Fatebinder) have never been summoned to the Overlord’s presence and your Archon mentors will merely repeat “Kyros is mother and father” when asked.”

The people are, essentially, kept in the dark. “Kyros does not commission portraiture and the citizens see iconography and Edicts – they are never really presented with a human face to worship. People know there are the Archons and then there’s Kyros, and Kyros isn’t the ‘top Archon’ but an entity more powerful than any ‘mere’ Archon.

“There is no internet in Terratus so folks can’t Google Kyros, instead most people end up mirroring the superstitions around them – a lot of men think Kyros is a dude, a lot of women think Kyros is a lady, but just as many will think the opposite.” Many prospective players, myself included, were equally guilty of these assumptions. In a similar vein, many assume something stranger is going on.

“Some suppose Kyros is a team, some think it a dynasty, some think Kyros is a giant beast with a dozen heads – there are plenty of fears about what Kyros is but nobody is out there setting the record straight. Only Archons are likely to have actually met Kyros, and they’re usually tight-lipped on the subject.” 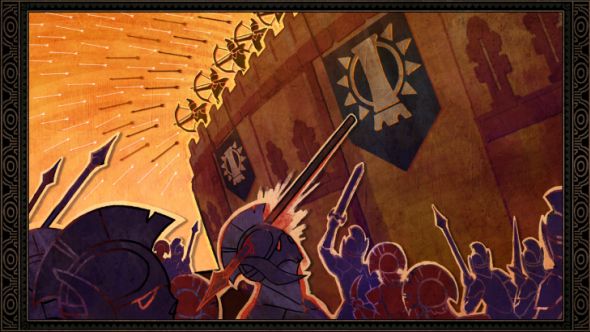 Beyond who she is, what Kyros has done is a little more obvious. We wanted to know why nobody had managed to stop the overlord before this point, and the answer is it’s just taken a lot of time. “Kyros’ conquest of the world wasn’t overnight, it’s been a 400+ year project in the making, and the game centers around the events of that last leg of Kyros’ attempt to own everything. Some regions of the world were conquered by warfare, some with bloodless intimidation, most by some mix of the two. It’s taken 400 years for Kyros to get to the final stage of the invasion.”

On that timeline, Kyros has instituted her own calendar. “Most folks know what year it ‘officially’ is (the game’s prologue opens in 428, the main gameplay is in 431),” say Obsidian, but that doesn’t mean Kyros has been upfront about it. “There’s plenty of confusion as to what the start of the calendar is – some think it’s when Kyros was born, some think it’s when Kyros first wore the title of Overlord. Those in the know could tell you that year zero was Kyros’ first Edict. And yes, Kyros starts the calendar on a zero – the Overlord is aware how largely incurious humans are and, anticipating stupidity over when a millennium begins or ends, planned for the future.” Kyros is pretty forward-thinking for an overlord of all life.

As far as Kyros’ influence on the player character and you, Obsidian are keeping schtum beyond what we already know from the start of the game. The world’s greatest heroes, the Archons, all bow to her now and you’re a Fatebinder, off to enact one of these Edicts. They’re essentially omni-powerful spells, giving a command that must be followed or horrific consequences unfold. 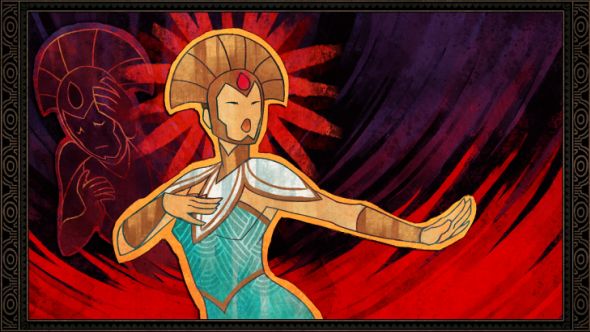 “Kyros has scores of Archons, many with their own armies, so the Disfavored and the Scarlet Chorus aren’t the sole extent of Kyros’ [forces], just the two significant ones in the corner of the world at the time of the game’s events. Some Edicts of Kyros have been resolved, the wording of the Edict satisfied, while other Edicts still linger after any number of years – so long as the until/if/unless wording (whatever it was Kyros declared when casting) isn’t satisfied, the magic just keeps going.”

It will be up to you to decide how well Obsidian have managed to create an omnipresent threat without explaining any of the why, or how. Tyranny comes out on November 10, available through the Paradox Plaza as well as Steam.