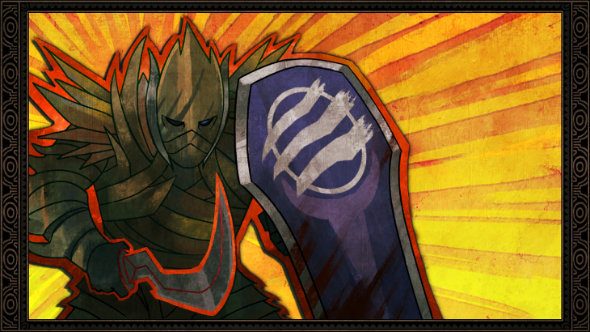 The latest Tyranny developer diary is all about Barik, one of your possible travelling companions in Obsidian’s evil RPG, Tyranny.

Barik is a tank who’s literally welded into his armour, a brass shell fused to him like a second skin.

He started his soldier career as a part of an army’s shield wall, thanks to his size and power. You can put this to use and have him taunting enemies and soaking up damage while the rest of your squad wades in.

“We designed Barik to serve as a much-needed shield to protect the party from danger,” says the Obsidian dev diary. “Barik stands in the front line, engaging enemies, taunting them into attacking him, and being a damage sink to keep the rest of the party alive.

“When designing his talent trees, we looked at a couple of different themes that players could use to specialise him. His ‘Sentinel’ tree focuses on allowing him to maintain control on the battlefield while increasing the amount of damage he can absorb. His ‘Punisher’ tree transforms him into a warrior of retribution, excelling at slaying foes that dare to stand against him.”

So you can have a killy Barik or a punchbaggy Barik. Check out his notable abilites and backstory over on the Tyranny dev blog.