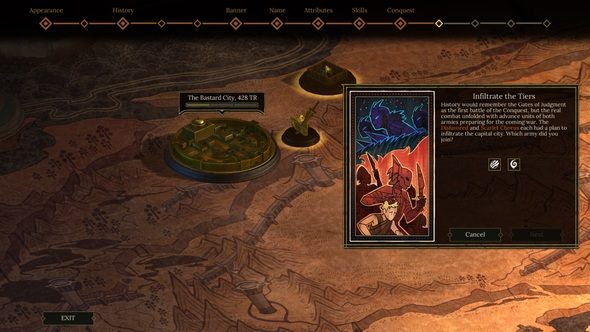 Tyranny is about choosing how to wield power on a scale that would make Dragon Ball Z characters blush. Within the first 10 minutes of my game, I had issued an edict—a magically binding contract—that when it wasn’t upheld created a storm that wiped an entire city off of the map. A raging tornado swept through the army that defended that city, sweeping them up into a maelstrom of flesh and metal. When it passed, nothing remained but the endless expanse of weapons jutting out of the ravaged earth.

I didn’t see this happen through a cutscene, I read it. But that made the imagery no less vivid thanks to Tyranny’s incredible writing. These are the kind of decisions I made at a rapid pace in Tyranny’s Conquest mode. It’s not a tutorial, but rather a story primer that introduces you to its densely written world using the only language it understands: power.

Unlike a typical RPG intro, in which you tinker over your character’s appearance and abilities and then head off into the main campaign, Tyranny makes a short detour into Conquest mode. Acting as a 30 minute pseudo-prologue, Conquest mode puts you in charge of the invasion into the last kingdom Kyros, your emperor/line manager, had yet to conquer. As a Fatebinder—judge, jury, and executioner of Tyranny’s world— you’re tasked with managing the assault and bringing ‘order’ to Kyros’ new subjects. 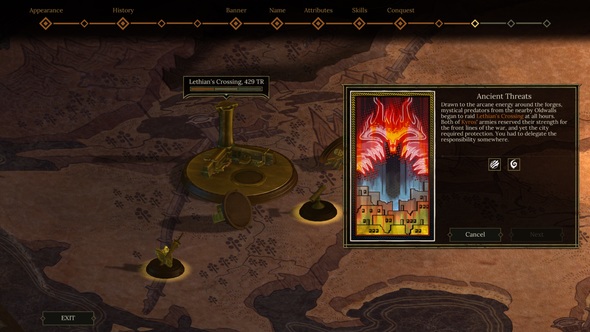 This all played out on a war table, with a map and golden miniatures noting cities and armies. Essentially, Conquest mode is like a simple ‘choose your own adventure’ novel. Each obstacle you encounter gives you some options to solve it, which then carry over to the main game. When I chose to storm the Bastard City alongside my vanguard for example, a group of soldiers later gushed over my bravery. While I suspect these decisions won’t dramatically impact the story, they do add a great deal of flavour to the player-character.

The point of this, game director Brian Heins tells me, is to better distill the obtuse world building of Tyranny in a way that’s more palatable. See, Tyranny’s setting is a complicated web of magic, politics, and culture. Where most fantasy RPGs tap into that vein of milieu established by Tolkien, Tyranny gives it the middle finger. It’s great because it makes the world feel fresh and exciting.

Simultaneously it sucks because the story relies on a shotgun blast of proper nouns that make you feel like you need a university course on Tyranny’s setting just to know what’s going on. So with a world so well-realized but so intimidating, how do you introduce the player to it? Tyranny’s answer is as simple as it is cynical: You conquer it.

In that regard, Tyranny’s Conquest mode is a success. At first, I had mixed feelings about the mode because, just like jumping straight into the story, it still felt like I was making decisions without context for why they were important. But after seeing those decisions in hindsight later on in the actual campaign, I really appreciate what Conquest mode does. As a Fatebinder, my only goal is to carry out Kyros’ will, but how I do that is entirely my decision. While that freedom initially felt a bit overwhelming, I soon learned to embrace it in the decisions I made throughout the conquest. 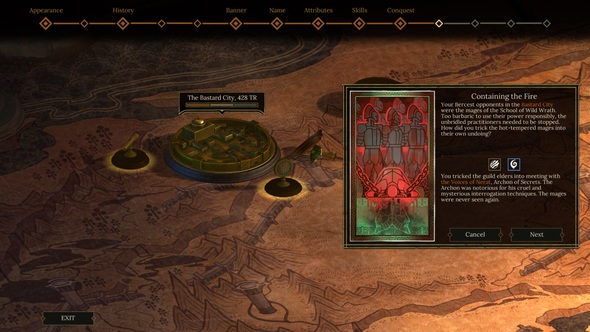 The other thing that this mode achieves is giving me context for Kyros’ two armies which I coordinated with: The Disfavored and the Scarlet Chorus. True to Tyranny’s ‘evil has won’ theme, you probably won’t see any of these soldiers getting a gold star for protecting human rights. Where they differ, however, is in the methods to their malevolence. The Disfavored are the highly coordinated elites, a company that values order and discipline above all else. Contrary to them, the Scarlet Chorus is a rag-tag horde of savages who thrive on chaos and independence.

Most of the decisions I made during my conquest dealt with disagreements between the two armies while fleshing out their personalities. While they are technically allies, their disparate methods make them quarrel like children, and it was often my job to resolve these squabbles like an exhausted parent. In one instance, the Disfavored discovered that members of the Scarlet Chorus were fighting on the side of the enemy. The Scarlet Chorus’ leader, an unsettling wraith shrouded in green energy, insisted that his men were actually gathering intelligence from inside the enemy’s ranks. The Disfavored didn’t buy it, but, quite frankly, he made me nervous and I didn’t want him as an enemy so I sided with the Scarlet Chorus. Yes, my first week on the job as Fatebinder and I had already left my spine at home. A pity. 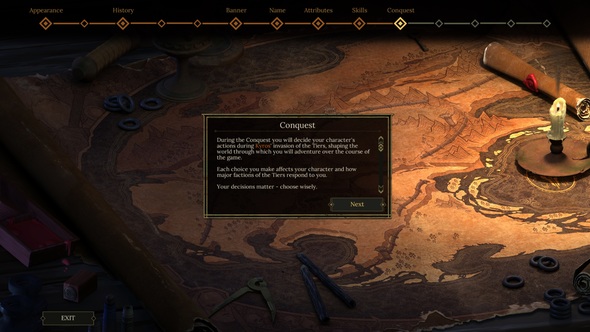 The other thing I really enjoy about Tyranny’s Conquest mode is how firmly it establishes my character in the story. A common trope in RPGs is to position the protagonist on the outside so that, like the player, they too have to learn about the world they’re exploring. Tyranny does the opposite and plucks you right into the thick of things. When I first started playing, it felt like being appointed vice president of a country I’d never been to. Backstory has always been an important part of building a character in RPGs, but it’s often crammed into a few brief decisions. In Mass Effect, for example, it means choices like whether you’re a survivor of a horrific event or a decorated veteran.

A few hours into Tyranny, however, and I felt like my Fatebinder had a lot more going for her than a one dimensional backstory. Characters constantly referenced my exploits during Conquest mode, either to praise my decisions or express anger at them. I immediately felt invested in the story because even in the first hour I already had a large impact on it. The opening chapter is set in the very kingdom I just conquered, so my accomplishments during conquest mode always hung in the background for better or for worse.

This new mode is a really unique idea that I hope other RPGs take note of. I’m not convinced that a series of branching decisions accompanied by loads of text is the most elegant way to introduce a story, but it works. Tyranny is shaping up to be so much more than just a reiteration on the ideas pitched by Pillars of Eternity. Conquest mode, like Tyranny’s middle finger to cliché fantasy, shows a willingness to take risks in pursuit of better stories. And the more time I spend playing Tyranny, the more I’m beginning to feel like the risk is paying off.