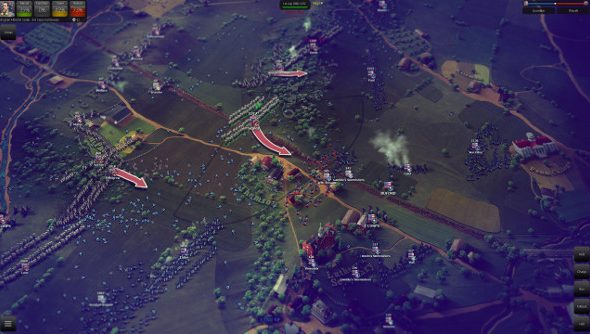 One of the coolest things you can do, if you’re really into a game and have taken the time to get really good at it, is convince one of your friends to buy it. That way, you can take out all your passive-aggression but stomping them into the mud and making them feel like incompetent poltroons, all under the guise of a friendly game! Fighting game fans have known this for years, of course, but this week I tested whether it’s as satisfying in a tactical wargame.

Ultimate General: Gettysburg was my weapon of choice to humble my fellow PCGamesN strategist, Fraser Brown. My increasingly-rhapsodic articles about the game sold Fraser on the idea of a multiplayer session, but would he fall for my other traps? Could I use my experience and Fraser’s lack preparation to give the Confederate Army the flawless First Day victory that eluded them at Gettysburg?

Fraser and I are going to be playing the defense of Seminary Ridge. From a wargaming perspective, it’s a rare case where history provides a perfect scenario setup.

The Union has a great defensive position, but they don’t have much to defend it with at the start. The Confederates have the manpower advantage for much of the battle, but Union reinforcements will pour onto the battlefield and moot that advantage if the rebels don’t move fast enough. On the other hand, if the Confederates overextend themselves, those fresh Yankee troops will roll them up like a carpet. It’s a difficult balance to strike.

Historically, the Union won this phase of the battle pretty decisively, and bought a lot of time for the rest of the Union army to reach Gettysburg and seize the key heights south of town. Those heights are where Robert E. Lee’s Army of Northern Virginia shattered itself on the following two days of the battle.

The first minutes of the battle proceeds like clockwork. There’s very little for Fraser or me to do. He can’t hold the first position, McPherson’s Ridge, with the cavalry skirmishers and lone artillery battle at his disposal. Not against two rebel brigades under Archer and Davis.

It’s the next step where things get tricky for a Confederate General. To win an epic victory here, I need to own two key locations: Oak Ridge, to the north of the road into Gettysburg. To the south, there’s the Lutheran Seminary, which enjoys a better field of fire and a lot of cover. Trying to grab them both at once is a great way to end up with nothing. The two objectives are too far apart. Units committed against one objective can’t help units trying to storm the other. 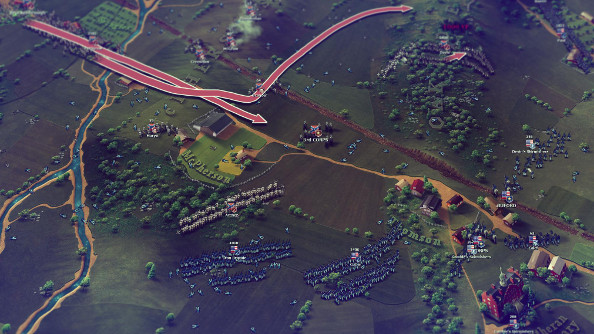 Union reinforcements are already taking the field, but I also have fresh troops arriving on the field to bolster Archer and Davis. Brockenborough’s brigade of over a thousand men arrives in the west along with Pettigrew’s massive 2500-man force. They’re not a moment too soon: Archer’s brigade is down to 800 men and is going toe-to-toe with two of the best brigades in the Union Army: the legendary Iron Brigade and Cutler’s Brigade. Archer has the advantage of cover in a light forest, but he’s still getting cut to ribbons and my attack to the south is in danger of getting pushed back.

On the other hand, Davis’ brigade has managed to push onto Oak Ridge, a position from which it will be very difficult to evict him, thanks to the tree cover and high ground.

As we play, Fraser brings me up short when he asks me how I feel about playing the Confederates. He’s curious how Americans regard this army that fought on behalf of slavery.

A few years ago, I think I would have been less ambivalent. Like a lot of Americans, I’ve been exposed to a lot of forms of the Lost Cause myth. Much of America still regards the Confederates’ greatest soldiers as national heroes, and the conflict is often regarded as being about slavery, first and foremost, but also about a lot of other issues. State’s rights, the growing economic and cultural divide between the North and South.

It’s a way to dodge the truth of what all those brave, honorable men in gray were actually killing and dying for. Hell, we need to preserve the lie of the Lost Cause so badly that we have a show like Firefly recast the Civil War as being about plucky, rugged individualists and freedom fighters resisting the hegemony of the centralized, industrial state. The spirit of the Lost Cause is allowed to live on, devoid of historical context.

Wargames are similarly divorced from their context. It’s easy to view the Confederates as sympathetic protagonists when they’re fighting a superior opponent and struggling to overcome the challenges of terrain, technology, and numbers. Meanwhile, slavery is off-screen. Not a part of the model.

Wargames promote this kind of mindset. They can’t address things like war crimes or racial oppression because they’re so focused on process. But when you look at the historical record, which is consistently damning for the Confederacy and its champions, it’s hard to maintain that distance between the war and its causes. The Confederate army was full of good and courageous soldiers and some truly brilliant commanders. They were fighting for one of the worst causes in history, and killed hundreds of thousands of their fellow Americans rather than accept a peaceful end to slavery. That should not be forgotten, even as we dive further into the fascination of warfare and the fun of wargaming. 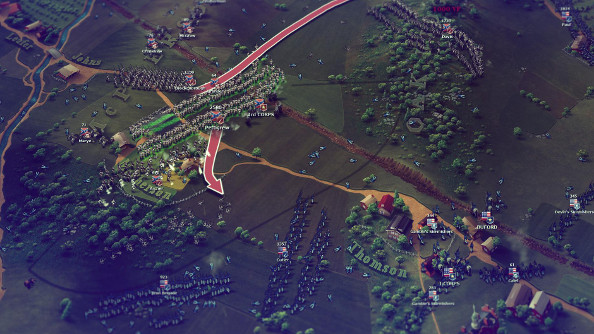 Everything in the balance

Archer’s brigade finally breaks. From its scenario starting-strength of nearly 1000 men, it’s down to 660, most of those casualties inflicted in the last few minutes.

Archer’s men sold their lives dearly, though. Fraser can’t make up any ground before Pettigrew’s mammoth brigade arrives and sends Cutler and the Iron Brigade feeling. It looks like the way to Seminary ridge is open for Pettigrew to storm forward and seize the heights.

Things that don’t occur to me at this moment: Pettigrew has had to march across the map and fight off two Yankee brigades. Seminary ridge is hundreds of yards away over exposed ground. I also can’t see what’s on or behind Seminary Ridge.

But there’s no time for that. This is a key window of opportunity.

Disaster ensues. Pettigrew crests the ridge into point-blank cannister fire from numerous Yankee gun batteries and rifle fire from the now-rallied Iron Brigade. Pettigrew loses 20% of his force within minutes and routs. I’ve just squandered the biggest unit I have, and Fraser just received a fresh division from the south. 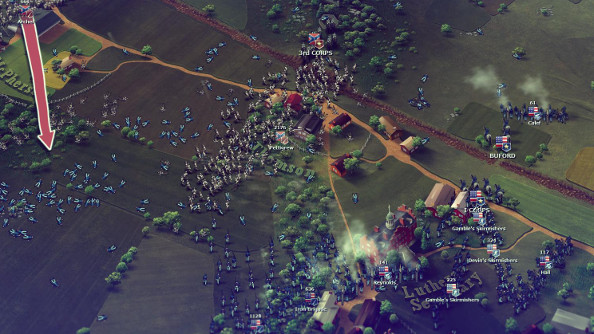 Fraser tries to follow-up his success against Pettigrew by making another push from the south. I’m forced to send Archer’s battered brigade back into action to hold him back. They resume their old positions and once again start shooting it out with two Union brigades. Archer’s unit is outnumbered by almost 4:1.

However, they’re buying precious time. More Confederate forces are pouring on the battlefield. Some are heading to the center to help break open the Union line. The rest are swinging to the south so they can hammer Fraser’s reinforcements in the flank.

Fraser’s newly-arrived division is blindsided by the arrival of new Confederate regiments on their flank. Within a couple minutes, his western flank has been turned and his center is starting to buckle as the used-up Iron Brigade gets hit by more fresh troops. 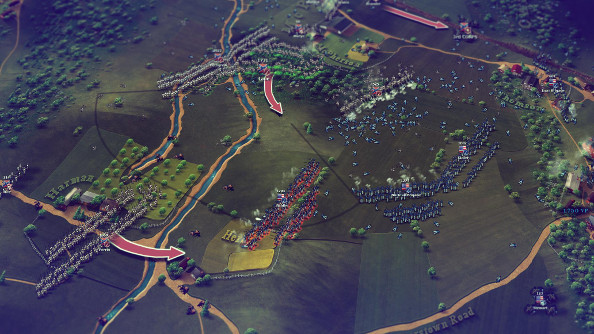 Fraser’s units fall back to the ridge in good order, but now there are just too many rebel troops. It’s taking everything Fraser has to keep the Seminary under his control, while I now have a secure-enough front line to bring up fresh artillery batteries and rest exhausted units.

Still, it’s a bloodbath. Pettigrew, Lane, and Scales are all forced to charge the Union positions and it all but shatters them. Scales and Pettigrew are cut to ribbons, and only the steadying presence of their corps commander keeps them from routing. Pettigrew advances a few bloody yards and gains control of the Seminary, even though his brigade is holding it while being raked by close-range fire from several Union batteries and infantry units. They’re down to about 1500 men, out of the 2600 who arrived this morning.

This is something that Ultimate General: Gettysburg gets very right. Civil War combat was lethal for the victor and the vanquished. Even lopsided battles exacted dreadful tolls on the winner. The brutal culling of Archer’s and Pettigrew’ brigades is not anything unusual by that war’s standards. At the Second Battle of Bull Run, where the Confederates practically crushed the Union army, the rebels suffered four-fifths the number of losses that afflicted the Union. These were armies that would absolutely savage each other before either side would yield. You could argue this was one reason why Lee felt he had to take a crazy gamble at Gettysburg: he’d beaten the Union Army soundly on several occasions, but he’d never annihilated it, and his own army was badly depleted in the wake of each victorious campaign. 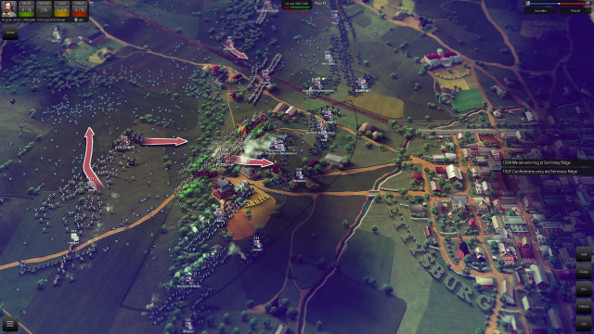 Fraser and I are at a stalemate. I can’t advance beyond the Seminary, but I still hold it. Maybe by only a few yards, but the ground is mine. My forces are taking a dreadful beating hanging onto it, but Fraser’s been savaged as well. He does not have anyone left who can mount a counterattack.

Had the initial Union defense collapsed this badly in the actual battle, it’s very likely the Confederacy could have taken the key heights south of the town and forced the Union army to either withdraw or launch suicidal assaults against the hills. But thanks to my masterful, dare I say Napoleonic, triumph, the road to Gettysburg is wide open. But it was a near-run thing.