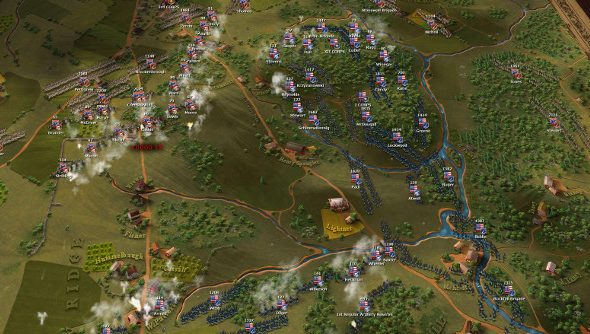 It’s been about seventeen years since Sid Meier’s Gettysburg showed how you could do real-time tactical wargaming in a way that was both easy to learn and incredibly authentic and nuanced. For years it has been the gold standard for accessible battlefield command games, even as compatibility issues make it harder and harder to get working.

Fortunately, Ultimate General: Gettysburg has arrived on Early Access to fill this void and put a new spin on this most familiar of American Civil War battles. With lightning-quick pacing and a clever branching campaign, Ultimate General might do for battlefield wargames what Unity of Command did for the operational level.

It’s not just Gettysburg’s importance to the Civil War that makes it such a perfect canvass for a wargame. It’s that the battle has a rare combination of balance, geography, and dynamism that make for an exciting wargame. Two armies stumble headlong into each other and engage in a running battle that leads to absolutely titanic assaults and heroic last-stands.

Each phase in the battle could have gone very differently and lead to wildly altered outcomes. Ultimate General: Gettysburg embraces this with a rare ambition. After each stage of the battle, depending on the outcome, the player gets two or three choices as to what the next step will be, and each choice yields a different scenario.

So you might end up following the historical course exactly, or you might find yourself in a situation where the Union completely rout on the first day, and so the Battle of Gettysburg inverts and turns into a desperate Union assault on the rebel positions along Cemetery Ridge. I fought battles that didn’t even take place on the actual Gettysburg battlefield, the action went in such a different direction.

After playing through the battle at least six times, I still don’t feel like I’ve seen everything, and have a long way to go before I’ve achieved anything like a flawless victory. Admittedly, one part of this being an Early Access game is that the later scenarios are not entirely finished, and the branching structure seems to break a bit near the end of the battle. But the first two days are brilliantly realized, and it looks like the later scenarios may have been patched even as I write this.

Ultimate General takes its cue from Sid Meier and the Scourge of War series by showing that Civil War combat is less about dishing out punishment than it is about managing the inevitable ebbing of morale and effectiveness.

Each unit has two values: morale and condition. Morale is a very squishy but resilient value. Soldiers are quick to decide that they need to get the hell out Dodge but, after a few minutes of resting behind the lines (perhaps with a general’s “aura” of influence helping boost them), they’ll feel more sanguine about their chances and be ready to fight again.

Condition is harder to improve. It represents readiness: physical exhaustion from a long march kills it, as does extended combat. So while the spirit (morale) might be willing, the flesh (condition) is weak. Once a unit gets into bad condition, it requires a long break from combat before it will be effective again. However, a unit in poor condition can still fight and hold the line, so it can be useful simply as a physical presence on the battlefield. They just won’t inflict many losses on the enemy or be able to maneuver very well.

This is a subtle difference between Ultimate General and SMG. Sid’s Gettysburg was really about terrain and support. It was about putting soldiers into positions where they had enough reasons to feel confident that they could stick it out no matter what happened. Ultimate General is more about anticipating the moment when they have to be pulled out of the line and replaced by fresh blood.

In a heated battle, a good general will set up something like a revolving door. Exhausted units rest in a safe area, while units that have recovered are moved into reserve, where they will slowly replace the guys fighting in the battle line. If things are going well, then you’ll start having more combat-effective troops on the field, even if you’re outnumbered, just because your guys are getting rested more effectively.

But this is all easier said than done. Good cover reduces the losses and morale hits that a unit suffers in combat, and high-ground extends their range and accuracy. So even badly damaged units can put up a hell of a fight if they’ve got good terrain and some support from friendly troops, while well-rested, confident brigades can be shattered within a few seconds if they’re caught in the open by a lot of enemy firepower. Especially if enemy artillery hits them with shell and canister fire, which can cut down hundreds of men at a volley. 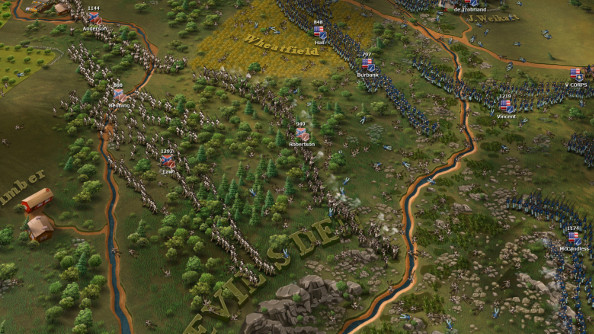 The AI seems competent, although occasionally it falls into making a series of reasonable decisions that add up to a giant bad decision. For instance, I basically massacred the entire Union army in one scenario because I drove them off their defensive positions and into the hollow behind a ridge. The AI kept reinforcing to try and hold its position, all while being pushed back inch by inch. After a few minutes, its entire army was in a giant ball, getting shot from three sides and taking the worst losses I’ve ever seen.

On the other hand, I’m surprised at how often the AI gets big picture thinking right. The battlefields in Ultimate General are pretty extensive, and it can be difficult to understand how a fight in one corner of the map has huge implications for something happening at the opposite end. But I was amazed when I launched a huge flank attack at the southern end of the Confdederate line.

First, The AI neatly pivoted its flanking units to meet the engagement, which is a basic maneuver but nice to see. Then, however, it pulled units from all the way at the other end of the map and started sending them to my point of attack. It had correctly recognized that it couldn’t just send its nearest units to help out, because that would have undone its position. So instead it identified a flank that was not in jeopardy and used those units as its reserve. That’s something I haven’t seen very often before.

For an Early Access game, I’m frankly astonished at how good and stable Ultimate General is. Game-Labs have done terrific work here, and I don’t really have complaints, just hopes. The main thing I’m looking for from the final release is some high-quality multiplayer, which this game positively cries out for.

But there’s no denying that at $10, Ultimate General is an astonishing value. We all went wild for it on Three Moves Ahead, so give it a listen if you want to hear us deep-dive on this game.

Don’t be put off by the fact that it only has one battle. There are so many settings and outcomes you can play with that it will stay fresh over repeated plays. This is an easy game to recommend whether you’re a seasoned wargamer or someone who is completely unfamiliar with the genre and the battle.