And now time for something completely different: the Ultimate Hacking Keyboard (UHK). Straight out of Hungary, the Ultimate Hacking Keyboard is a split ergonomic design featuring deep customisation options across a tiny footprint. What’s more, it comes with a lacquered beech palm rest and total tenting control – keeping you comfy while you break into the Pentagon or what have you.

To make up for its lack of real estate, the Ultimate Hacking Keyboard is equipped with two mod keys, with the ability to switch between multiple customisable layers pre-programmed through the included homebrew app. What’s particularly brilliant, however, is that this simple app is by far one of the best going. How is it that keyboards built by tiny teams of enthusiasts always seem to outperform and outmanoeuvre those built by major companies? Wooting, ErgoDox EZ, and UHK all excel in this regard.

The open source GitHub-hosted UHK Agent app is the key to unlocking the Ultimate Hacking Keyboard’s potential, offering up complete control of every key’s function, secondary function, and tertiary function. And there’s even potential for one more layer alongside the keyboard’s integrated mouse functionality. That’s right, wave goodbye to mice – you won’t need them where we’re going.

Okay, maybe don’t throw away your gaming mouse just yet. I didn’t find myself reaching for the dedicated mouse toggle all that often, but it has its uses beyond our humble gaming remit.

What does come in handy for a spot of gaming are the mechanical switches hiding beneath the surface. Available with Kailh Brown, Blue, Black, and Red, or Cherry Clear and Green, there’s a wide selection of mechanical delights to dig your gnarled hacker fingernails into. All live up to the gold standard of key switches, so you can’t really put a foot out of line here. Our particular review unit came equipped with Kailh Blue switches with a subtle audible click bang on the actuation point. 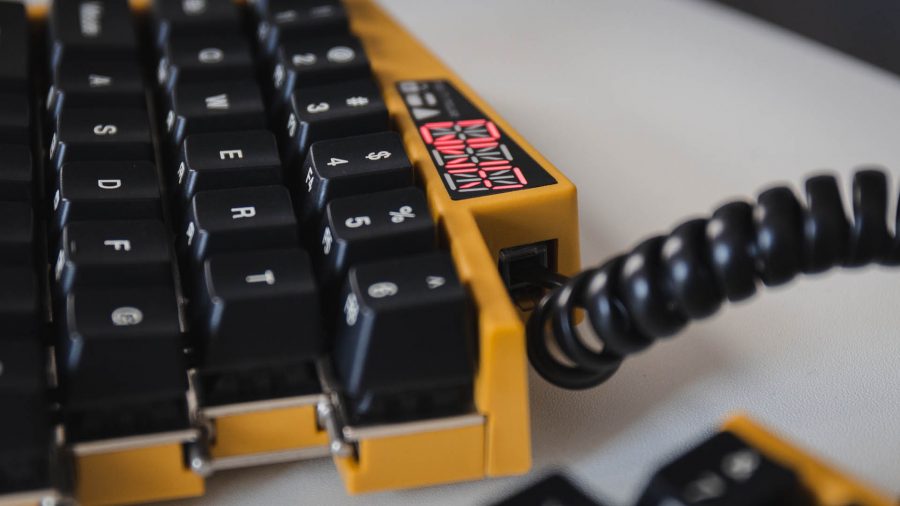 From the switches out, the UHK is built to a high standard. With a sturdy metal face plate holding every switch in place through the board there’s no flex whatsoever, and the palm rest is secured by a screw on either side. The team behind the board tout themselves as “sworn enemies of planned obsolescence,” and will even try to help you out if your UHK breaks out of the two year warranty period. So you know you’re not going to get lost in the RMA system.

Featuring an optional split design, the keyboard can also function as both a single unified board or two independent halves. Each discrete half features two metal struts to secure the connection point, with a five-pin connector allowing for data to flow between the two in lieu of the coiled cable across the top. This can also act as the connection point for one of four bonus modules. These optional extras include three extra keys and a trackball, a sizeable trackball, a trackpoint, and a touchpad.

Ensuring access to all layers, there are two undercover keys beneath the split space/mod bars that offers switched functionality – the key underneath space is a shortcut for mod, and vice-versa. So if you fancy just using one half – perhaps to free up some desk space for your mouse while gaming – any layers and shortcuts you’ve designed bespoke for a game or app are still available to you. 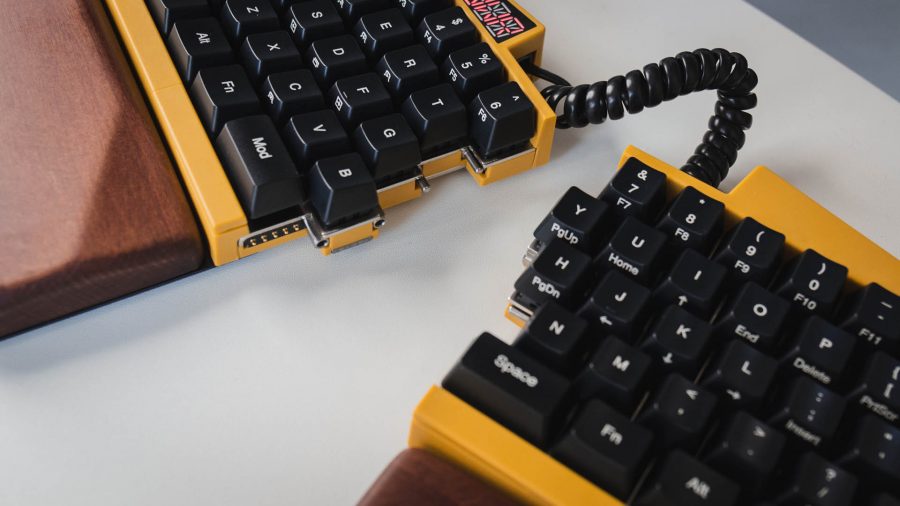 And it’s easy to know which layout or layer you’re currently running with, as the UHK features a large digital display in the top left that offers a three digit, customisable short-hand for layers set in the Agent app. For example, I have named my bespoke layout “420” due to the macros I have set up. That’s why. That’s why I did it.

The screen certainly adds to the retro aesthetic. And I’ve had mixed responses to the UHK in the office, that’s for sure. While most will (correctly) lean towards it being a beautifully-crafted throwback to days of computing past, others have not been approving of our review sample’s mustard yellow colourway and functional clutter.

With a price tag of $350 for both the UHK and the wooden palm rests, this does, however, makes a Topre Realforce look cheap. The price reflects the quality of the product, and the size of company producing it – but it does weigh heavily on the features and functionality on offer. The Ultimate Hacking Keyboard is truly for die-hard enthusiasts and efficiency aficionados alone.

While I can’t say for the UHK’s proficiency in hacking, I can attest to its proficiency in just about everything else – including making a better, more efficient typist out of you. As a keyboard for staunch workaholics that never want to lift their fingers from the keyboard, to its efficacy as a split ergo gaming pad, the Ultimate Hacking Keyboard is fundamentally a joy to use. It’s easy and succinct customisation software makes it easier than ever to elevate your macro game and take control of your desktop – a feat seemingly only possible with dedicated enthusiasts behind the wheel.

Truly, you won’t find anything quite like the Ultimate Hacking Keyboard anywhere else, even among the best gaming keyboards going. And if you fit neatly into its target audience, you likely won’t settle for anything less than what it has to offer. What it does, it does exceptionally well. However, if you don’t quite fit into the slim overlap in the keyboard enthusiast/power user Venn diagram, you probably stopped reading back at $350 – and I sure as hell don’t blame you.

You'll find few, if any, faults with this lovingly created enthusiast board. However, if you're not quite sold on all of its features, you'll struggle to justify the cost.