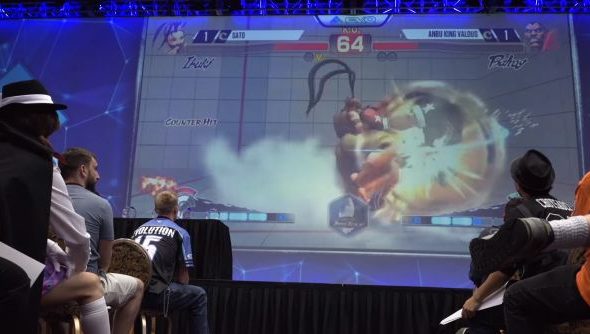 2015 will be the final year of top level competition for Street Fighter IV, Capcom’s premier e-sport for most of the last decade. Across four major versions, seven years, millions of dollars in prize money and with the weight of an entire genre on its back, it endured through the rise of the MOBA, a StarCraft sequel, and Counter-Strike’s resurgence to remain my favourite game to watch. Here’s why.

Perhaps SF4’s greatest qualities come from its genre – it’s one versus one, and immediately understandable. There are no different parts of a map to observe, or action that can be missed, or the disparate pieces of teams to keep track of. A man, woman or beast stands on one side of the screen, facing off against a man, woman or skateboard on the other side. They punch and kick at each other until one is dead. The end.

While complexities beyond that (and team-mates to blame) have clearly proved more popular for gaming as a whole, that immediacy is great for watching. You need no prior understanding of videogames or any other piece of culture to know how a fight, a street fight no less, works. What you see in front of you is every single piece of information available to everyone in the game: a pair of health bars, two power meters, and what each character is doing on screen. 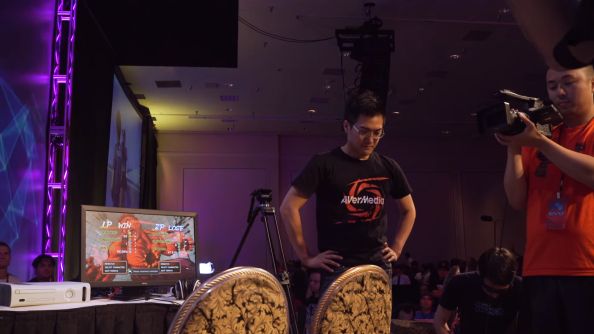 Ostensibly, there are no secrets, just what each player knows about their character’s capabilities. Tuning into Street Fighter for the first time, or after a long period away, is better than any trailer. You’ll see something new at every moment – a combo, an extension, a specific timing, counter or punishment for that matchup which turns it on its head. And they’ll all look stunning, they’ll flow beautifully into one another and never seem out of place.

That, specifically, is one of SF4’s specific triumphs. Despite first landing on arcade cabinets in 2008, it still looks gorgeous today. Part of that is it has a vastly smaller number of things on screen to render at once than many games, but it also can’t ever suffer a single frame dropped. Timings in a fighting game are required to be so perfect that just one out-of-place stutter is unacceptable.

It’s the art style too. It uses bright colours and caricature to keep its characters recognisable and make even their quickest movements immediately identifiable. It means that even this much time later SF4 can still hang with its peers, and that’s before it was ported to the newest generation of consoles. 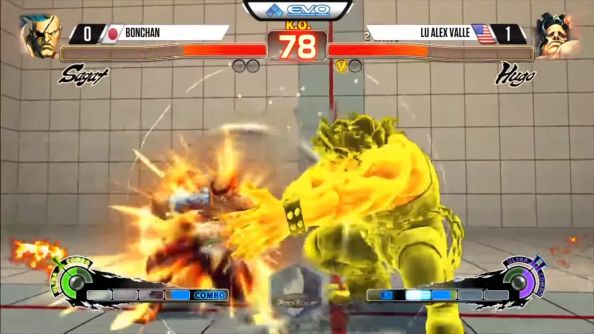 Of course, it isn’t all ‘what you see is what you get’. There’s a masterful set of systems behind the game that make it complex to play. They’re impossible to perfect and learning all the specific interactions of FADCing and option selecting and a thousand other made-up-sounding words would take forever, but it’s clear when they come into play. You know immediately when a hit has been armoured against, as a unique animation shows the attack deflecting. Fully charged focus attacks come with the game’s original inky motif, leaving a black mark on the screen, while special moves and cancels cause a character to flash gold or red depending on their power. Whenever something exciting is happening, the game makes sure you know.

This extends deeper than special moves and specific flashy moments. Every hit in Street Fighter IV causes a very slight pause on impact. It’s almost unnoticeable to begin with, but watch enough and you’ll realise the game is giving you time to appreciate a solid hit. It serves a gameplay purpose of letting players react a little easier too, but for crowds it’s perfection. Those individual small hits so often turn into massive damage from SF4’s combo- and linking-heavy system that they’re vital, and the pause gives just enough time for observers to recognise what’s about to happen.

The ultimate example of this is in Ultra combos and, to a lesser extent, their Super bretheren. They pause time for these giant, flashy and cinematic wind ups. One of these coming out of nowhere is the ultimate in crowd pleasers, giving a lengthier pause of animation time for the people to start celebrating. Vitally, there’s always that sharp intake of ‘will it work?’, and extra hype when it does. As the game aged, the number of scenarios where it was combo’d into for guaranteed damage increased, but it remained exciting – would it kill? If it doesn’t, what’s happening next? Plus, every so often, we still get the surprise Raging Demon, Akuma and Evil Ryu’s signature, unblockable but uncombo-able attack which must come as a surprise to be effective and thus is always a special moment. 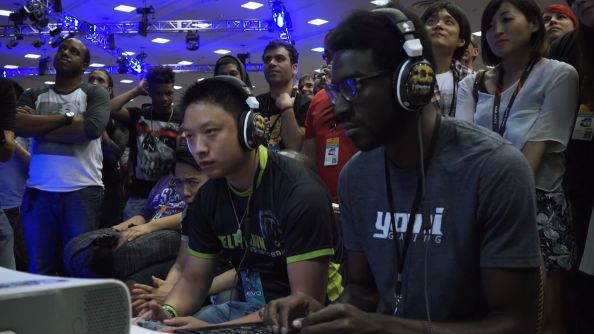 None of this would be possible, however, without exciting players, and the nature of Street Fighter means storylines are built more effectively than any other game. The skill cap in not only knowledge but execution is so high that the same names will be locked at the top of most tournament standings. This is true across all fighting games, but SF4 was particularly well balanced between the capacity for surprise players to make a splash and a good variety of pro-tier talent that would rotate in and out of top eight spots at tournaments. It means that having a group of favourite players will always keep a tournament interesting to watch, rivalries will naturally develop and upsets really mean something.

Take the recent Capcom Cup. Daigo Umehara – arguably the greatest Street Fighter player of all time – managed to become the underdog hero in the grand finals because his opponent, Kazunoko, had beaten him in 10 straight games across a couple of tournaments before this. Not two matches beforehand, Daigo was the villain crushing hometown spirits by taking out US hero and their best player SnakeEyez. And this is not a unique situation, with every major tournament having a shifting pattern of spectator love, all powered by the only pro scene in e-sports to consistently get crowd mics right.

SF4 is also a brilliantly designed game in it’s own right, and one that nailed the e-sports ‘formula’ long before its peers. When Dota still had the ‘All-Stars’ attachment and Counter-Strike was a question of 1.6 or Source, Street Fighter had been doing regular edition updates for a decade. As relentlessly mocked as those lengthy strings of prefixes and suffixes were, Capcom et al had struck on the best way to make a competitive game stay relevant with constant evolution. SF4 got as much of this as any of their games, from the free and vital AE2012 update that provided some much-needed balance, to the Ultra version of the game we have today with its 44 characters, new mechanics and exceptional variety in playstyles at the highest level. 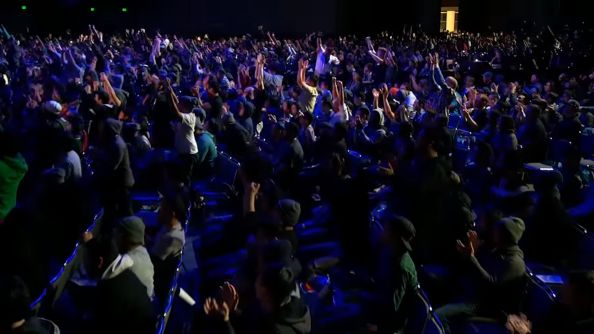 What’s truly impressive from a development standpoint is SF4’s character variety despite not having a self-righting mechanism in the form of picks and bans or maps. While League of Legends can handle some egregious balance concerns via those characters being disallowed by teams on a per-match basis, and professional StarCraft is built around maps with chokepoints that stop rush strategies being all-empowered, SF4 has no such safety nets. While it means there is less diversity – genre differences notwithstanding, Capcom Cup had 24 unique characters picked while something like The International will have over 80 – it’s a testament to Capcom’s good work that their balance team has kept the game fresh and increased the viable pool so significantly.

Outside of the company itself, the community figures around the game make it a more enjoyable watch too. This goes beyond player personalities, which are so much more obvious and fore-front when they have an individual character to represent them who they may be the very best in the world with, and into commentators. Street Fighter 4 has the best commentary teams in e-sports today. They’re knowledgeable to the extreme, all brought up from an age before personality was all you needed to ride the internet’s popularity waves, play-by-play casters and analysts alike able to provide in-depth opinion and info on player’s decisions. They’re unafraid to criticise, know when to praise and manage the balance between the two despite those they’re commenting on being far above their own skill level. To a man they’re also far more able to produce a listenable and excitable cast, improving hype moments rather than diminishing them. At least, most of the time. 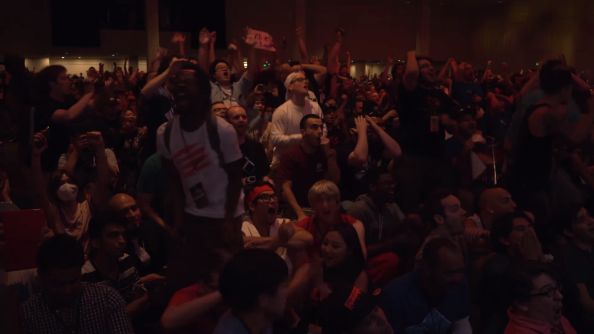 The big question is will Street Fighter V – or any fighting game – be able to recreate and improve on these factors? Well, best of all, it barely matters. The fighting game community has proved, time and again, that it will keep old games alive no matter the quality of their newer iteration. Street Fighter X Tekken was not a good game on release, and so did not take over from SF4. Super Smash Bros. Melee just had its greatest ever year, despite the series’ fourth iteration being competitively viable. While Capcom’s money and pressure is behind SF5, the community will not let their baby die for a long time yet.

More than anyone else, they are the lifeblood that’s made various tournaments my annual highlights for the past five years. Don’t get me wrong, they’re just as filled with awful people as any mostly-internet-based community, but the atmosphere that’s brought to events, the culture of popping off, of getting hype, is why Street Fighter IV is the best game to watch in the world.