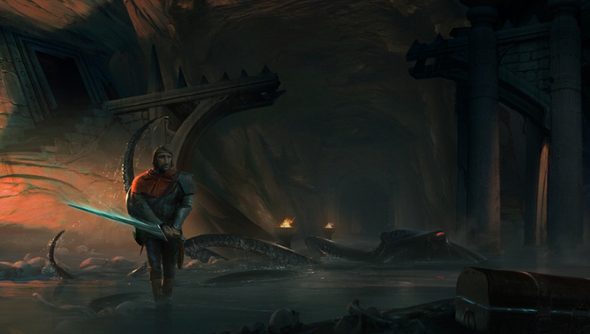 The huge sums of cash being thrown at the Underworld Ascendant Kickstarter have not only secured the place of Lizardmen among its fantasy ranks, but helped the game meet and exceed its fundraising goal of $600,000.

The spiritual successor to the Ultima Underworld series has been funded, the money has been airdropped into OtherSide Entertainment’s studios through a skylight, and development surges onwards.

That $750,000 milestone took the project to its stretch goal of scaly Lizard people, while subsequent goals were also reached, meaning players can expect to see The Underswamp area as well as Companion Creatures. These helpful pet buddies can assist players inside and outside of fight, bless their little hearts.

Funding has accelerated in the last day of the RPG’s cash-drive, unlocking a handful more stretch goals. $850,000 gave us dynamic music and sound effects as well as The Resonant Caves area. Though sadly unreached were the milestones of $900,000, which would’ve unlocked additional language localisation, and $950,000, which would have allowed the developers to include a Necropolis of the Ancients. No Necropoli for you.

Speaking after hitting the initial target, Looking Glass founder Paul Neurath said, “we’re humbled, honored to have your support. And, to be honest, a bit relieved that we actually did reach the milestone. The team are incredibly excited that we can now make the game we have so passionately wanted to make for 20 years, and do it together with you.”