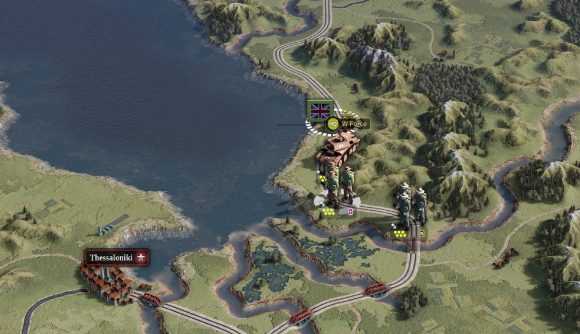 Unity of Command 2 is an excellent game no matter what category you’re using – turn-based strategy, war game, WW2 games… It offers a modern interpretation of an age-old formula that’s both accessible, but also doesn’t make you think of that box of rubbish in your dad’s loft.

A year after the base game was released, Unity of Command 2 is getting its first expansion pack today, called Blitzkrieg. The main campaign puts you in charge of the allied forces in Europe, from the closing days of the North African campaign right the way through to the fall of Berlin in 1945. Blitzkrieg introduces a new campaign that, as you can imagine, gives you the keys to the German Wehrmacht and lets you play through the early years of the Second World War up to 1941.

There are 13 scenarios that follow the historical course of events, but on top of that, depending on your performance there are 12 further ‘alt-history’ scenarios you can unlock as well. This includes three missions dedicated to an invasion of the UK, starting with Operation Sealion and finishing with a mini-blitz up the Midlands.

Accompanying your conquest across Europe will be over 50 new unit types, new options for German Army HQs, as well as new specialists and fort terrain mechanics. There will also be a free update that will be released today alongside the expansion, which brings with it a lot of quality of life improvements and overhauls of various UI elements.