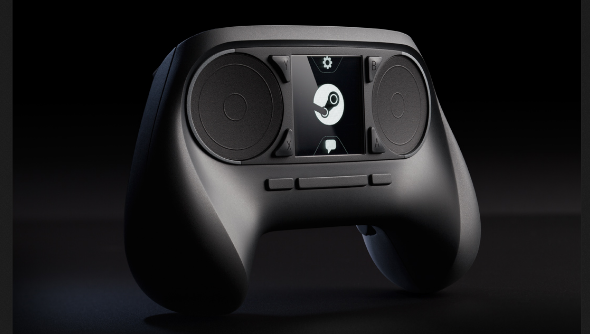 Valve have revealed the third and final element of their plans for a new PC generation. Following on from the reveal of SteamOS and Steam Machines, the final part of the puzzle is the Steam Controller. Bringing together all the important elements of mouse and keyboard commands into a living room-friendly, handheld pad, the Steam Controller is a mental looking device that heralds a new era for the PC.

The Steam Controller features two track pads instead of analogue sticks, offering the precision of a mouse but operated by the thumbs. The high resolution of the pads allows easy manupulation of RTS units or precise aiming in FPSs. They also offer a new form of force feedback in the guise of ‘Haptics’, a electro-magnet powered system that offers vibration-like feedback based on numerous details such as speed or texture. Without the resistance of thumb sticks Valve had to create a system that offered tacticle feedback, and haptics were the answer. The pads also offer audio feedback, acting as speakers. We can already imagine in-game radio commandes emitting from them.

A touch screen allows the functions of the Steam UI and Overlay to be displayed right on the controller, The clickable area will respond to strokes and touches, and using it will also bring up the Overlay on your main display, so you don’t have to move your head should you need to keep your eyes on the action.

The Controller features sixteen buttons, some on the front, some on the back and shoulders, which offer complete control. For a familair example, have a look at the mapping for Portal 2 in the diagram below. 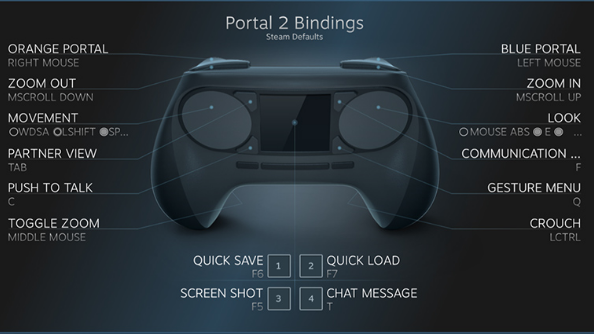 The Controller is an open platform and completley hackable, allowing a Steam Workshop-like level of modding, with tools being made available to the public. Valve express that they look forward to seeing what the community comes up with to make the Steam Controller even better.

Valve have designed the controller to work across the whole Steam catalogue, so every game will function with it. Since it’s almost neither keyboard nor traditional controller, the Steam Controller will either trick existing games into thinking it’s being played with a more conservative system.

So how do you get one? Well you could sit down and be patient, or you could try your luck in attempting to grab a Steam Machine beta prototype, which will ship with a Steam Controller. These beta versions will be wired and lack the touch screen though, so for the full experience you’ll have to wait until next year when the final, wireless unit goes on sale.

That said, don’t go thinking that this is for SteamOS or Steam Machines only. No sir, this bad boy will work with any version of Steam, be you a Windows, Mac or Linux person.