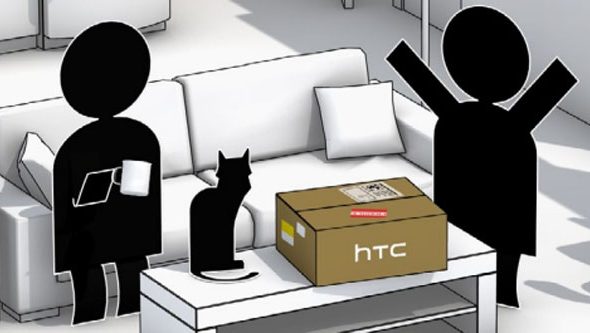 The first batch of HTC Vive headsets are turning up on the doorsteps of major movie studios, AAA developers and indie teams alike. They come with a set of instructions, which turn out not to be the sort you can leave in the wrapping for three weeks before throwing out with the junk mail. This Valve-approved VR device is a finickity piece of kit.

In a series of diagrams starring the paper-people of Portal’s tests, Valve and HTC spell out the ideal set-up for a Vive. There’s the traditional clearing of coffee tables that was necessary for Kinect – but on top of that users also need to remove mirrors that might interfere with tracking, and escort “unpredictable, untracked objects from [the] space” – the given example, a cat.

Then there are the basestations: two black boxes that track the location of the Vive’s sword-hilt controllers via a grid of infrared light. Valve recommend they’re mounted at opposite corners of the tracked space, above head height, and angled downwards. Holders are provided so that the basestations can be affixed to walls, ceilings, shelves, tripods or, least likely, a “braced floor to ceiling pole”. 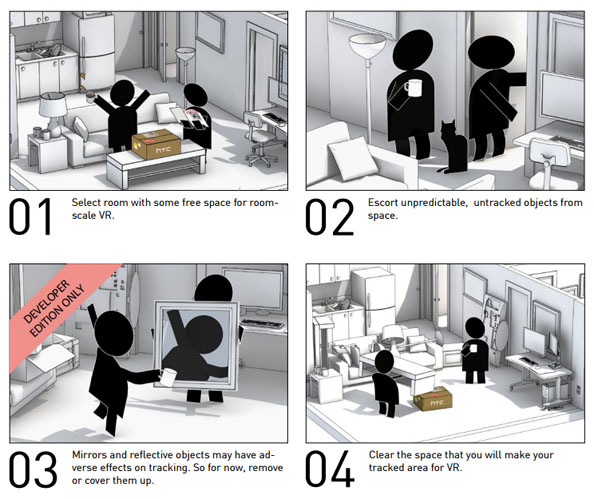 “The area doesn’t have to be a perfect square,” they advise, to the relief of everybody who doesn’t live in a purpose-built VR dungeon. “Taping off the play space can be useful.”

Basestations have to be connected to the mains, and the headset via an interface box to a PC. Between the USB, power and HDMI cables, players will be plugging three wires into the top of your head – and somewhat resembling Warhammer 40K’s Emperor.

Comfort is a consideration, though: a knob on the headset adjusts the distance between lenses, to accommodate “narrow or wide set eyes” – and space can be made for glasses at a slight cost to field-of-view.

The whole booklet is worth perusing if you’re intrigued. Think you’ll make space in your life for one of these?