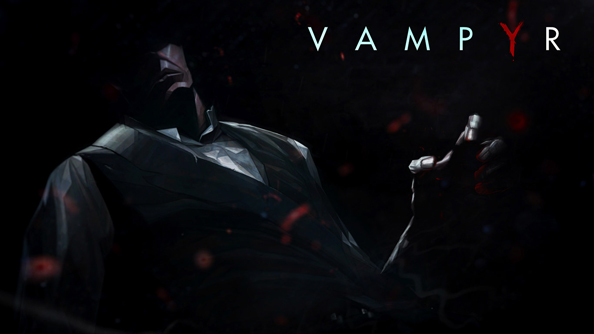 Vamp-Y-R. Whether it’s from the Swedish or the 1932 German-French horror film of the same name, there’s a certain flourish and edge to Dontnod’s title not found in the traditional spelling. That’s indicative of the approach the Life is Strange alumni are taking to vampire fiction in their next game, a blood-sucking action-RPG.

The Parisian studio behind Life is Strange have made every effort to dodge the stakes and silver bullets of vampiric pop culture. Determined to return the pallid, pouting undead archetype to its roots in gothic literature, but keen to avoid the Victorian era already well-mined in contemporary games and cinema, Dontnod have plumped for 1918 London – a city on its back as Spanish Flu rips through a population weakened by four years of war. Across Europe, the pandemic killed more people than the conflict.

“I suppose it is fair to say that the succession of those two major catastrophes – one being natural, the other being initiated by men – help us reach the objective for the mood of the game,” muses narrative director Stéphane Beauverger.

The London of the artwork Dontnod have released thus far is a gaslight nightmare. The buildings are cracked open, the streets thick with red-crossed tents. The apparatus of an industrial dawn looms, and the scene is smudged by fog. You know the world doesn’t end here, in the early 20th century – but as with Peaky Blinders’ Birmingham, the environment is so apocalyptic that any future seems difficult to conceive. 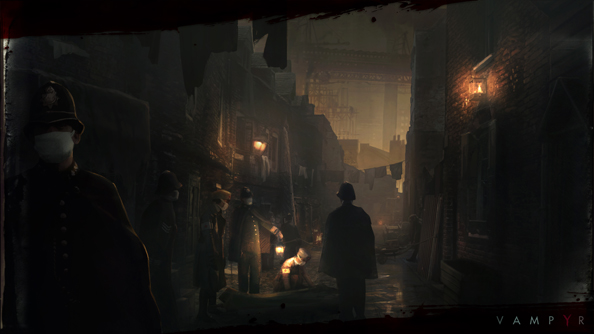 Beauverger speaks of despair and madness, of local and national infrastructure struggling to cope with the bodies, but suggests, “It sometimes takes hard times to discover what a man is really made of. The Spanish Flu gives each and every citizen the perfect opportunity to reveal his true self – hero included. The scarce lights shine brighter in the darkness.”

While poised at this very particular, teetering point in time, Vampyr’s protagonist is pulled straight from the Victorian Gothic. Doctor Jonathan E. Reid is a studious, rational man who ruminates on the strange condition which compels him to take lives and drink blood.

“The figure of the scientist is central in the classic horror stories of the 19th century,” Beauverger points out. “Frankenstein, Jekyll, Griffin and Moreau, all of them were eminent doctors trying to cast away the shadows of obscurantism and superstition.”

Thrust forward into 1918, where empirical science has taken even greater hold, that figure is suddenly forced to confront ancient myths of impossible predators. He’s becoming one. 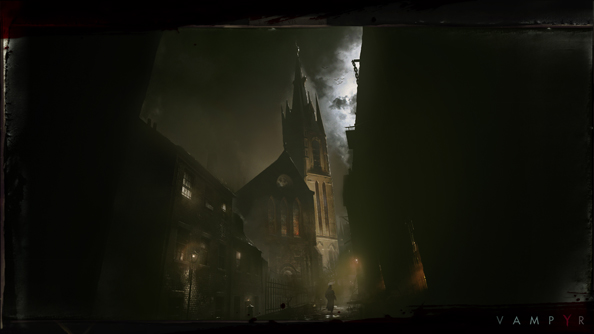 Though Dontnod keep their descriptions deliberately vague, it sounds as if Reid’s evolution will be affected by the blood he questionably acquires from his victims.

You might remember the ComboLab from Dontnod’s debut, Remember Me; though Vampyr employs a more “build-oriented” skill tree, the team are still keen on handing players a toolbox filled with expressive abilities, and you’re open to create custom builds if you wish. The studio expect players to experiment with combinations of vampiric powers and weapons, both melee and ranged.

Another of Remember Me’s high points was its incredibly dense and detailed dystopian Parisian backdrop. Vampyr is less directed – a “semi-open world” – but Dontnod have engaged in the same kind of environmental storytelling and found the new Unreal Engine fit for purpose.

“Unreal 4 is surely a great engine but still under construction,” says Moreau. “As far as I know, no ‘big’ triple-A games have been released under the UE4 label yet, though some popular UE4 games are in Early Access.” 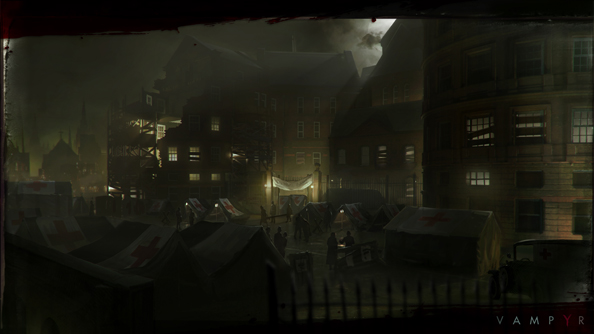 The studio have poured time and effort into understanding the new features that come to the engine each month. They’ve used simple Blueprint scripts to develop their mission ingredients, and spent a lot of time with the lighting tools – essential for infusing their London with gothic colour.

“Lights, shadows, unsettling silhouettes and an ever-present and suffocating fog are major players in Vampyr, creating an aura of doubt and uncertainty,” tells art director Gregory Szucs. “They are as important as the city of London itself.”

You don’t need to believe the old promo line that the city itself is a character, because Vampyr’s London is full of actual characters: every NPC has a name, a personality, a few relationships and some secrets. Some provide key mission information; others require your medical assistance, kicking off secondary missions; still others sell items. But all of them are, to put it bluntly, prey. As Reid becomes utterly dependent on blood, the question isn’t whether he kills, but who.

“We try to avoid caricatured characters – they all are human beings, with all the complexity it involves – in order to make your choices tough,” says Moreau. “You won’t have the choice but to murder some of those people and live with the consequences.”