There aren’t many great Vietnam wargames. Vietnam itself is not an easy war to simulate, no more so than it was an easy war to fight. To make a traditional wargame about Vietnam is to miss the point of a deeply unconventional war. But wargames, and games in general tend to be hopeless when it comes to modeling the less quantifiable work of persuasion and reassurance.

But Vietnam ‘65, the recent $10 wargame from developer Every Single Soldier, arrives to provide one of the first (maybe the first) PC wargame that does justice to the Vietnam War on a strategic level. It is a game of politics, heart and minds, and body-counts.

Vietnam ‘65 is about the tensions at the heart of the American war effort in Vietnam. Your overall objective is to retain control of the “hearts and minds” of the rural population of Vietnam’s Ia Drang valley (as represented by a randomly-generated map).

This is not something you achieve via combat. Instead, you reassure the villages that dot the landscape by sending infantry units to visit them regularly. Vietnam ‘65 shows this by having the villages light signal fires to show that they can be visited to increase their “hearts and minds” score. If you make your rounds regularly, you’ll slowly win the adherence of the Vietnamese people and Communism will be defeated.

But the Communists are also running around to villages trying to undermine their support for you, as well as seed the countryside with ambush-positions and minefields. You can’t see them most of the time, but they’re moving invisibly around the map via the Ho Chi Minh trail (the infiltration network that the Communist government in North Vietnam used to support the Viet Cong insurgency in the South). 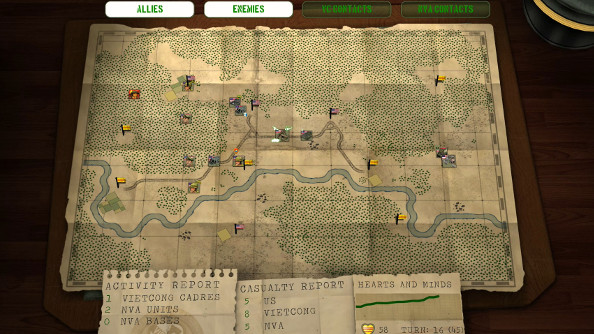 Once you can see the Communist forces, you can usually kill them. American artillery batteries, gunships, airstrikes, and even their infantry will usually smoke any Communist forces that come within range. But there are never enough troops and guns to go around, because every little thing you do in Vietnam ‘65 costs you political points, appropriately represented by an icon of the Capitol in Washington. And the more units you request to bolster your forces, the greater the cost of each successive reinforcement. Washington wants you to fight the war, but with the minimum possible commitment.

You can gain more political points by destroying the enemy: the Viet Cong guerillas and the North Vietnamese Army that aids them. This is not that far from the truth of the American war effort prior to 1969: decision makers in Washington were obsessed with quantifiable results. The wanted dead communists, a lot of dead communists, in order to reassure themselves that they were winning the war. But at the same time, they were enormously sensitive to losses of American forces.

So here is where Vietnam ‘65 becomes truly devilish, and a hell of a good wargame. You’re fighting a guerrilla force who generally won’t expose themselves to your guns unless the odds are on their side. So in order to rack up the political capital you need to wage war with all the tools of the American arsenal, you have to send small detachments into the lion’s den to bait the Communist forces, and then hope you can kill them all before you get overrun.

Again, we encounter a contradiction of America’s war in Vietnam. Your soldiers are a precious resource who cannot be lost lest Washington lose faith in the war effort. But then, your soldiers are also bait. 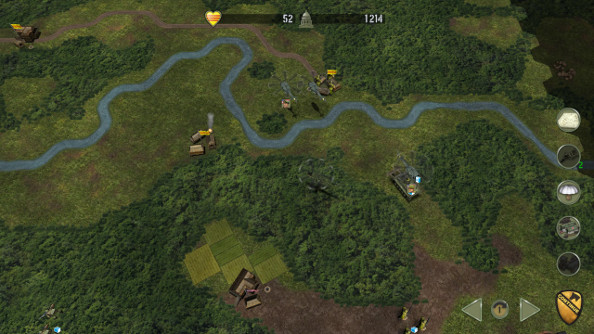 That’s the strategic picture of Vietnam ‘65, but it’s also a wargame about the air cavalry. It’s about far-flung outposts in hostile country, tenuously supplied and supported by air. It’s about squadrons of green Hueys criss-crossing the skies above the jungle, dropping infantry at a moment’s notice near a Vietnamese village, then taking off and dodging rocket fire on their way out. It’s about fighting a dangerous, bloody war alongside an armed community-outreach program.

If you simply try to “clear-and-hold” in Vietnam ‘65, you’ll discover that the countryside gets overrun with Communist troops. A hostile countryside becomes a gauntlet for your helicopters, which means your air-mobile tactics become impossibly risky. Once your birds can’t fly safely, you can’t visit those outlying villages, you can’t rescue besieged bases, and you can’t resupply long-range recon units. So you have to retard the progress of the insurgency via direct combat.

These are complex dynamics that drove the course of the Vietnam War for a number of years, and what’s striking about Vietnam ‘65 is that not only does it make them simple to understand, but also quite a lot of fun to play.

There is the simple mechanical challenge of conducting combat operations: there are always some units out in the field, steadily running out of supplies and requiring either resupply by air or, if they’ve been hit, a medevac back to base. No sooner have you secured one village than you need to send a detachment to a different one. Parts of the countryside are turning dangerous and you need to go clear them out… but you also need to send engineers into the jungle to construct new outposts and clear landing sites that you can use as waystations in your war effort. It’s a tricky juggling act and, as casualties mount and more insurgent forces pour onto the map, the delicate schedule of airlift, resupply, and reconnaissance begin to break down. 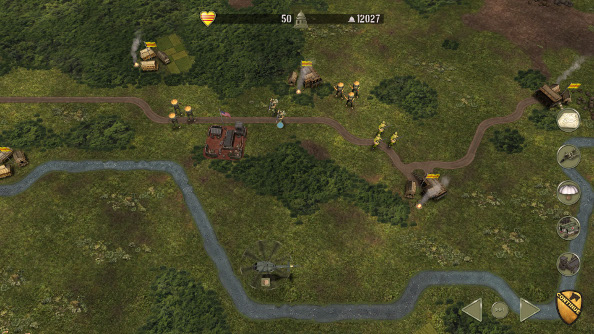 This is the end

In a good way, I found myself wishing that Vietnam ‘65 were longer. There is only one scenario that runs for 45 turns, which is easy enough to do in an hour-long session. I’ve played the scenario several times now and usually have a pretty close game, though I’m starting to figure out the tricks the really running the table on the Viet Cong and their northern allies. It’s also a fact of life that the game often ends just as things are getting truly dramatic, with NVA armor and artillery bases besieging US outposts, and US gunships and artillery executing fire missions as fast as they can be called-in. Sometimes I was left wanting a slightly longer war.

But Vietnam ‘65 is really closer to great board game design than traditional PC wargame design. It’s a single scenario that operates according to very special rules. But it holds up under repeated play. I do feel like it has its limitations, even on Veteran difficulty, because there are places you can start to exploit the system. A couple Green Beret recon units walking around the jungle can usually find juicy targets every turn or so, and at this point I essentially harvest Viet Cong units for points, and that begins to make things run a little too smoothly and predictably for a game about Vietnam.

A small but nettlesome problem is the game’s dual-identity as a tablet and PC wargame. The interface likely makes a great deal of sense on a tablet, but it effectively wastes the right mouse button, and the radial command menu will get in the way of parts of the map you want to see. Even after many hours with the game, I’m having a few too many mis-clicks in each game.

Still, how many games about Vietnam have even come close to doing the subject justice? Hell, how many games make the act of loading and unloading troops transports into something fun? On PC, I can’t name a single recent game that’s attacked this subject, and achieved its objectives so well.