A new report into the penetration of VR headsets in the UK has found that only 3% of Britons have any sort of virtual reality device, yet still expects in just four years that figure will be one in three.

To get a good VR experience you need a quality GPU. Check out our guide to the best graphics cards around right now.

The ambitious report has come from Strategy Analytics, a global market intelligence company, and suggests that after the initial slow start virtual reality is going to become as common as Sky TV, with nearly half the country onboard by the early 2020s.

The caveat though is that of the two million Brits expected to be rocking a VR headset by the end of this year a massive 90% of those will be ropey little smartphone shells, like the flimsy Google Cardboard. Only 1% of that figure will be high-end devices, like the Rift or Vive, that we can plug into our PCs. 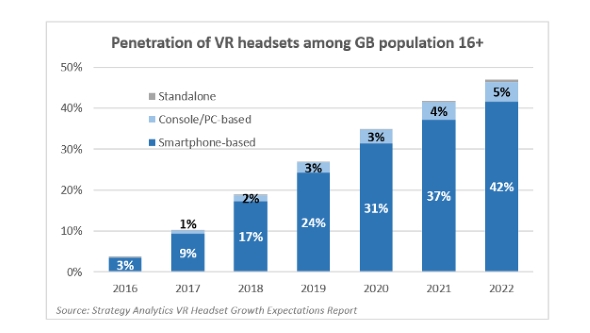 That’s not a huge surprise given the relative expense of the two different ends of the VR spectrum.

“The VR headset market will be much like the car market,” explained David MacQueen of Strategy Analysts, “most owning the likes of Vauxhalls and Fords, a handful owning Porsches and the odd few splashing out on a Ferrari.”

Valve are still working on making their Ferrari run as smoothly and as quickly as possible, with more advances being announced at this year’s Steam Dev Days conference in Seattle.

But it’s the success of the Playstation VR (I’m guessing that’s one of MacQueen’s Porsches) which will be key to the expected growth in the mainstream gaming sector. Launching this week, PSVR could end up being the make or break moment for virtual reality in terms of games. If it’s a big success, with lots of great VR content, coming from the big devs and publishers, that will also translate over to the PC market encouraging more to develop AAA titles for the Vive and Rift.

But if it’s a marked failure, with support from the top tier devs quickly falling off, then that could well put VR back a good few years across the board. And maybe these ambitious estimates will be way too eager. Gaming though is not the only market for VR.

“VR can bring new experiences to people beyond the obvious next step in video games,” continues MacQueen. “There’s also watching sport right in amongst the action, enhanced communications and social networking, plus more serious uses such as better educational materials for kids or use in architecture and design.”

I was super keen when I first got my hands on a Rift DK1 with Half Life 2 VR and Elite: Dangerous, but I can’t help that nagging suspicion that it would just be another bit of discarded tech that clutters up my desk. But how many of you guys are rocking some VR faceware? And is it of the Ferrari or Vauxhall kind?