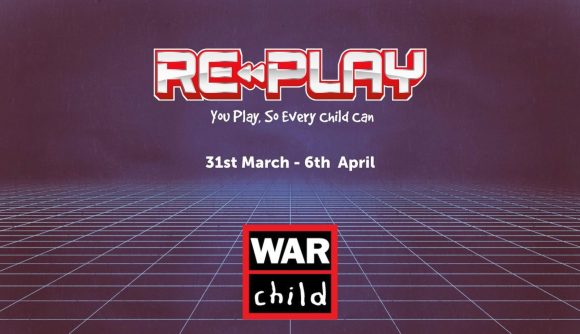 War Child UK, a charity whose mission is “to protect, educate, and stand up for the rights of children caught up in war”, has kicked off a new week-long fundraiser to support children in conflict. Called Re-Play, the initiative sees the launch of a Steam sale packed with games “that transport you back to your childhood”, a tournament hosted on retro games platform Antstream Arcade, and a speedrunning marathon.

Running from March 31 to April 6, War Child UK’s Re-Play campaign starts with its Steam sale, which you can find at that link. There’s a mixture on offer for roguelike games, adventure games, and chill games fans alike. The sale includes a 20% discount on Motion Twin’s hugely popular 2018 roguelike Dead Cells, making it £17.59 / $19.99 right now, along with a 20% price drop on its 2020 DLC The Bad Seed.

Other games featured in the sale include Cattails – an animal sim with Stardew Valley-like pixel art that lets you live as a cat – as well as puzzlers Toki Tori, Toki Tori 2+, Rush, and Edge. There’s also multiplayer strategy game Wargroove, non-linear adventure game Reventure, and 360-degree platformer-shooter Rive featured. A percentage of revenue from each of these will go “straight to War Child’s charity appeal”.

Over the course of the week, Antstream Arcade will be playing host to an arcade tournament, which you can catch via its platform “to watch the Bubble Bobble mayhem ensue!” There’ll also be a Re-Play charity livestream going on during the week that’ll feature a bunch of streamers getting stuck into some classic games. You can catch the full schedule, volunteer to host a stream, and donate via Tiltify.

We have a ton of great livestreams happening over the next week for RE-PLAY! Check out the schedule below, and all the streamers' pages on @WeAreTiltify here: https://t.co/N7hpauN6pc pic.twitter.com/03AE6gItc2

As part of the Re-Play campaign, War Child UK is also teaming up with UKSM to launch a “full-throttle speedrunning marathon” which will feature “the UK’s best speedrunners” and likewise be all about retro games. This goes live April 3-4, running between 12pm and 10pm BST / 7am and 5pm ET / 4am and 2pm PT each day. You can catch it all on the UKSM Twitch channel here.

“War Child UK supports children whose lives have been torn apart by war – keeping them safe, helping them learn and cope with their experiences, and equipping them with skills for the future,” the charity explains in a press release.

I am happy to announce our first @sanctuarytwitch team charity event raising money for @WarChildUK! The Re-Play campaign encompasses a Steam sale, a tournament with @AntstreamArcade & broadcasts from our talented team. Check our schedule and help us to support this amazing cause! pic.twitter.com/G3nT8fOwsx

“The specialist gaming team has innovative fundraising partnerships across the PC, console, and mobile industries, as well as through streaming and support from the gaming community, and to-date has brought in a massive $5million through gaming. Re-Play aims to increase the amount of engagement and funds generated via retro gaming. You Play, So Every Child Can.” You can find out more about War Child UK and the work it does at that link.