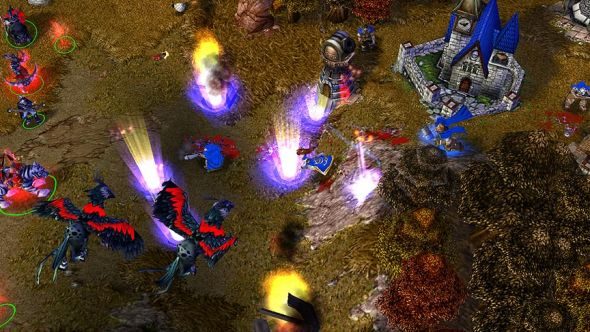 As we near the release of StarCraft: Remastered (no, you’re overexcited) it seems Blizzard’s Classic Games team is now refocusing its attention elsewhere. Warcraft III is looking a little rough at the edges and needs more significant changes than its big space brother. Those are happening soon, with balance patch 1.29 for Warcraft III already announced in China, along with a brand new map pool to encourage different types of match.

For the finest examples of the genre, here are the best strategy games ever.

The news comes via Chinese distributor and tournament organiser NetEase, though sadly not with an official translation. With the ChinaJoy event coming up (essentially China’s version of E3 and where we’ll get our first glimpse of Garrosh in Heroes of the Storm), they’ve announced that some of Warcraft III’s best players will take a shot at new maps with new balance rules, specifically for neutral camps, items, and trees.

Things like the distances and amounts of resources at starting bases, plus the kinds of monsters on the map and the items they will drop, have been tweaked. There are also three new maps specifically designed for the new version of the game and to give more variety to what has been a stagnant metagame for some time. Unlike Brood War, the balance of Warcraft III has not been sanctified and made untouchable by community love, so expect more on the way.

In a recent interview, translated on Reddit, the Classic Games team explained that they have some “big ideas” for what they could do next, but want to avoid direct balance changes to races, heroes, and units until they’re happy with the map situation. They also say things like adding more races, or changing the unit and pathing AI, are off the table for the same reason as in Brood War – at that point, you’re making a new game.

We’ll likely hear more as ChinaJoy kicks off, hopefully via a more understandable source than Google Translate. It starts on Thursday and runs until the end of the week.