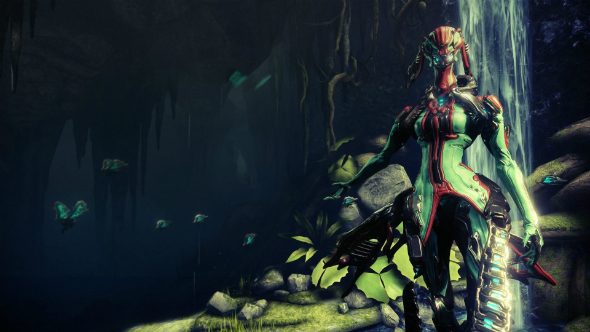 It’s been a busy few months for Warframe with its first dedicated convention, TennoCon, in July and now a fresh update which adds the new frame Titania to the battle.

For more excellent free to play games on Steam, look no further.

The Silver Grove update adds a new warframe for players to use, as well as improving Lunaro and adding a Glyph system for you to spray your tag all over the place like some sort of cyber-banksy but probably with more thought-provoking political commentary.

Titania honestly sounds mad, a fairy exoskeleton able to shrink down and fly around the battlefield, a spellbinding distraction ability that kind of looks like she seduces enemies, and a swarm of razor-winged butterfly mates. Imagine deadly butterflies. Now you don’t have to, see them below:

The new warframe comes along with updates to the team sport Lunaro including a new map, themed around Steel Meridian, with a sideways net and mid-field ramps. You can now more easily pass the ball with a dedicated button for that, which is, well, quite an omission that they’ve fixed there, really.

It also introduces the Glyph system, allowing you to tag the world with your own glyph if you want to taunt a fallen enemy or just make sure that some reminder you exist is left somewhere. Just to remind yourself and others.