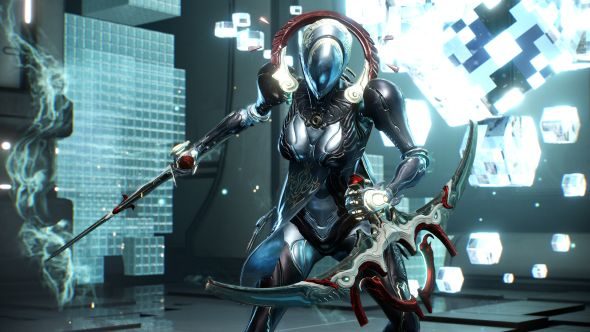 Digital Extremes have announced plans to rebalance Warframe’s weapons, as well as the Warframes themselves.

According to the Warframe development workshop, developers Digital Extremes are currently rebalancing Warframe’s weapons, and the Warframes themselves. They also have plans to make further adjustments in the future to “shake things up”.

In a development workshoppost last week, the developers revealed plans to change some Warframe’s abilities and augments.

“Each Warframe’s stats and ability kits combine into a unique entity that offers different strengths and weaknesses,” Digital Extremes wrote. “With 34 Warframes to choose from (and the 35th on the way), a Tenno may find there is no challenge they cannot overcome by making good use of the swiss army knife that their Arsenal offers. Some well-rounded frames do multiple things well, while others greatly excel in specific circumstances.

“When reviewing the Arsenal over time, our developers often find themselves asking: ‘is this fun?’ That’s the most important question to us, from the perspective of both the active player and their three squadmates. We understand the importance of power fantasy, but overbearing abilities can make squadmates feel ineffective by seriously disrupting intended gameplay flow. Conversely, when a Warframe doesn’t do enough, players may simply choose a “better” frame, sacrificing personalization and diversity for efficiency. Neither of these situations are ideal, so let’s shake things up!”

Big changes are to be made to Warframes such as Ember and Chroma. Chroma’s Spectral Scream will have walk speed removed and jump restrictions applied, allowing you to freely move while this is active and reducing player frustration. Also a much-needed nerf is set for Ember’s World on Fire. Five seconds after casting, a percentage will begin counting up on the ability icon. As this percentage scales from 0% to 100% over ten seconds, the ability’s energy cost and damage dealt both grow to double, while the ability radius shrinks to half. This should prevent players from AFK farming with the ultimate ability. You can check out the full list of Warframes affected here.

Warframe’s weapons are also due to undergo changes, primarily buffing underused weapons, according to the development workshop.

“We are revisiting all weapons and adjusting their stats to fit into some Mastery Rank grouping guidelines based on DPS and Crit/Status split total,” the developers wrote. “The end result is the high performing/popular weapons stats remain untouched outside of being placed into their intended MR group and the rest of the weapons are brought up to equivalency.”

Weapons such as the Gorgon Wraith are receiving improvements to increase their critical damage, ammo capacity and accuracy, while others, like the Tetra, are also having their recoil reduced. You can check out the full list of weapon changes here.

Veteran players seem pleased with the upcoming changes, but what does it mean for newbies?

“We have been looking at re-balancing weapons for a while, and on the whole, this rebalancing affects all players – new and seasoned,” live opps and community director Rebecca Ford says.

“For new players, I would say, the big takeaway is that searching for the best weapons to match your ranking is now clearer. There is a clearer path to progression,” Ford explains. “Before this, it wasn’t entirely clear which weapons were best for your particular ranking. In other words, rather than you just seeing a huge list of weapons and not really knowing their worth.”

“As for Khora’s status, her model is 100% done,” Ford says. “We’re currently on the redesign drawing board in terms of her abilities and how they function. So, no new news there for now.”

These changes are due to go live with Warframe’s Shrine of the Eidolon update later today.