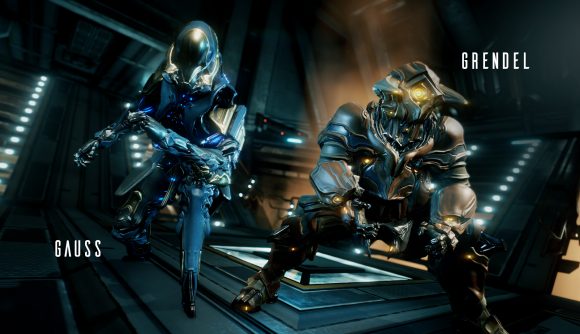 TennoCon, the official annual convention devoted exclusively to Warframe, is going on this weekend – and while we’re certain to have more news out of the show later today, we’ve already got the first big news now. In a surprise appearance at a panel, developer Digital Extremes posted pictures of the next two Warframes coming to the online title – and while one of them we’ve seen before, the other is brand new.

The completely new Warframe, which we haven’t even seen rumoured up to this point, is called Grendel – and you can see it in the picture above. Unfortunately the speakers from Digital Extremes didn’t reveal much information about the new Warframes, so all we’ve got is supposition.

The name Grendel suggests a monster of some sort, as it’s the name of the creature that opposes the hero Beowulf in the ancient tale. He is described as “a creature of darkness, exiled from happiness and accursed of God, the destroyer and devourer of our human kind.” While that’s probably a bit extreme for this particular Warframe, it seems to be quite a powerful one.

The picture Digital Extremes showed at the panel had Grendel surrounded by the bodies of its enemies, so it’s clearly not a friendly one. The Warframe also appears to be doing a sumo stance, and may well be a tank-like frame in the style of Inaros, Rhino, and Valkyr. We’ll hopefully find out more as the day progressing.

As for the second frame that the developer showed off alongside Grendel, it’s the frame previously known as Running Man – and now has an official name, Gauss. As it seems to rely on speed, the frame will probably work a little like the agile Volt. The video above (which was shown on a stream earlier this year) showed Gauss moving at incredible speeds around the battlefield, although the presenter did note at the time that it was “subject to balancing”.

Related: check out the best ninja games on PC

We’ll have more on TennoCon 2019, and everything it reveals about Warframe, later in the day. At the very least, the Empyrean expansion will be shown off properly, and that’ll hopefully come with a release date too.