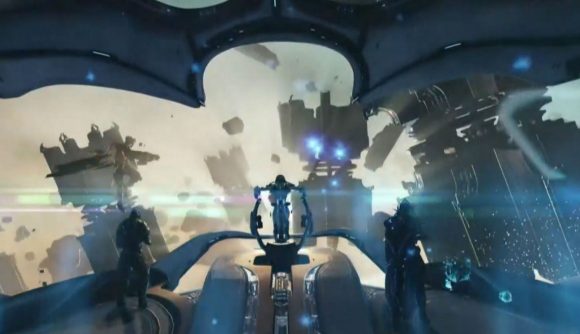 A new Warframe Railjack trailer has shown off fresh footage for the long-awaited Railjack expansion – but you’ll have to wait until July 6 for the full reveal. But, we can tell you one thing: it’s no longer called Codename Railjack, its name is Empyrean. The news was revealed by Rebecca Ford from developer Digital Extremes at the PC Gaming Show press conference at E3 2019.

We still don’t know the Warframe Railjack release date, yet, but we do have a good idea as to the expansion’s specifics. Warframe Empyrean has you jetting off in Railjacks, highly customisable, multi-crew space vessels with which you can wage high-octane ship-to-ship battles in groups of 1-4 players.

In the Warframe Empyrean trailer – of which you can watch in full further down this article – you can get a glimpse of what the combat, exploration, and the internal decor of each ship will look like. However, the footage ends with a glimpse of a special new frame, and you can get it for free.

The new suit of armour you can add to your flashy collection is Warframe’s Nekros Prime, and you can get it for free by watching a consecutive thirty minutes of the TennoLive full reveal stream.

This broadcast takes place during the final hour of TennoCon in Canada’s London, Ontario on July 6 at 6pm Eastern time. However, make sure you’ve got your Warframe and Twitch accounts linked together first to avoid disappointment.

Frame rate: Here’s how to get Warframe Wisp

That’s not the entirety of what we know about Warframe Empyrean, of course. We were given a work-in-progress peek at the Warframe Railjack interface, so we have at least an inkling as to how ship customisation will work. Once you’ve dived into that, get started with assembling your galaxy-conquering Railjack crew.