The Battle for Armageddon is one of the central conflicts in the bloody, war-torn Warhammer 40K universe, pitting the totalitarian Imperium of Man against the relentless green tide of orks. Inspired both by World War 2 and wargames, it co-exists but is separate from the Warhammer 40K tabletop game, and is perfectly positioned to be given a digital makeover by the wargame publishing factory that is Slitherine.

Developed by Lordz Games Studios and Flashback Games, Warhammer 40,000: Armageddon has more than a hint of their other series, Panzer Corps, but it’s all informed by Games Workshop’s board game. The two already share similar concepts, despite the many light years between them. Lordz and Flashback hope that it will be “a gateway into the world of wargames.”

It’s been 15 years since the last turn-based 40K game. Since then we’ve seen shooters, RTSs, and whatever that thing on tablets is. They are all set in the 40K universe, but aren’t particularly representative of the tabletop game that inspired them. Like Battle for Armageddon, though, Warhammer 40,000: Armageddon is a turn-based wargame that looks like it’s staying true to the source.

There are limits, though. Games Workshop might have offered up the setting, but it refuses to allow the mechanics to be replicated. It’s why all these other 40K games have been so different. But simply by making it turn-based, the developers are making something that could be closer to its origins than anything inspired by them in well over a decade. And of course, as Flashback Games’ Alex Shargin says, it’s “yet another hex-based wargame.” 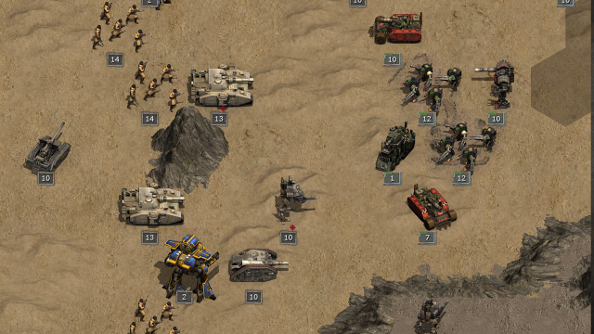 The inhospitable world of Armageddon sees Space Marine and Imperial Guard dance with the savage ork forces. The units have more in common with miniatures – static, detailed creations – than the animated troops found in Relic’s Dawn of War series. Lordz has been working on the art for the game, and the studio has crafted units and terrain that, while not very pretty, do reflect the board game and tabletop game that inspire them.

On the Space Marine side of things, multiple chapters participated in the massive war, and they’ll be playable in the digital conflict. The Blood Angels, Salamanders and Ultramarines will be going toe-to-toe with the ork horde, and each will have specialities that set them apart. The Salamanders are used to fire and intense heat, for instance. That training will come in handy during the scorching season of fire, when Armageddon’s weather becomes reminiscent of the inside of a furnace. The ork forces don’t mind the heat either, while the humans will find themselves getting a wee bit sweaty.

It’s not just fleshy men, orks and Space Marines duking it out on Armageddon, though. Both sides bring their mechanised horrors to bear, including the iconic Titans and predator tanks. Regardless of their size and strength, each unit only takes up on hex, but that hasn’t stopped the likes of the Titans from being intimidating walking weapons.

“We have more than 300 units in the game,” says Shargin. As he says this I mutter “wow” under my breath and try to image all the different ork and Space Marine troops I’ll be able to smash together like a kid opening up a toy box and finding nothing but 40K miniatures.

More than 20 stats will combine to make the diverse units, and they can wield up to four different weapons that also come with their own stats. Passive and active special abilities are the icing on the cake differentiating specific troops. But none of that is set in stone, with unit customisation, inspired by the source game, allowing commanders to refine and craft their own specialised forces.

I called Armageddon inhospitable before, but that doesn’t do the hellish world justice. “When we started looking at Armageddon, it was like there’s only two kinds of terrain: wasteland and ash wastes,” says Shargin. “We were like, what kind of game can you do with this? But the more we looked at the sources, the more interesting terrain types we found we could use.”

Shargin and his team realised that their game wasn’t going to emulate a world that remotely resembled Earth, absent grass or trees or anything that feels like home. Rivers of toxic gunk or magma meander around the world, volcanoes tower over wasteland and humans huddle together in gargantuan, claustrophobic hive cities. And this bizarre alien landscape will inform strategic and tactical decisions.

Fighting within the hive cities, with their winding corridors, precludes the use of things like Titans, while wandering near monstrous vegetation could leave unsuspecting Space Marines as nothing more than plant food with tough shells. The aforementioned fire season is just one meteorological problem commanders will face, as toxic rain and ash storms will also hamper the progress of armies.

While wargame mainstays like various terrain types, elevation, line of sight, fog of war and zones of control add complexity to the process of two forces shooting the crap out of each other, Shargin assures that Warhammer 40,000: Armageddon will be a game that anyone can play, one that’s easier than most mass-market strategy games.

“To be honest, I don’t know how to make it even easier than this,” says Shargin, in regards to how simple it is to pick up and play. “It’s as easy as it gets.” It will come with a printed and digital manual, but Shargin doesn’t think players will even need to read them to grasp the concepts detailed within them. But, he promises, this doesn’t mean that it lacks depth.

Single-player and multiplayer will be available, with the single-player scenarios – over 30 of them – combined into a large campaign tree with a storyline spinning the story of the war for Armageddon. The branches mean that players can take different routes and provides opportunity for commanders to make choices on how to proceed. Units will carry over from one mission from another, with RPG-like growth, making the survival or death of units carry some weight. 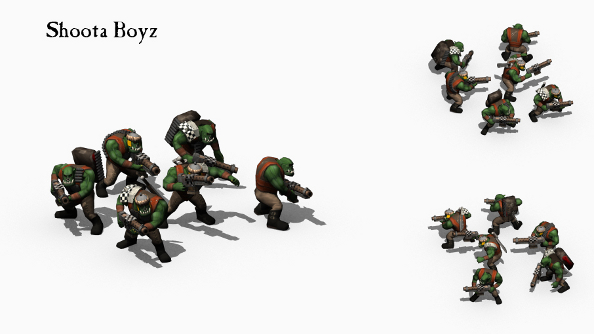 Extra scenarios outside of the campaign show off historical battles from the Armageddon conflict, and during these battles players will be able to take control of the waaagh-loving orks. Multiplayer will be play-by-email rather than simultaneous and in real-time, allowing players to pick up where they left off rather than sitting down for one, long session.

Army customisation will come into play in the multiplayer component. “Every player goes to a tournament with his own special army,” says Shargin, discussing the tabletop version. “So here, we’re going to have a similar thing. You can create your own army, save it, and use it in multiplayer games.” The multiplayer will be both competitive and casual, with a ranking system allowing players to find appropriately skilled opponents. Up to four player battles will be supported, from big free-for-alls to human vs. AI co-operative shenanigans.

Shargin promises extensive modding support that doesn’t require any knowledge of programming or scripting. The files are easy to edit – they are plain text files – and it will be possible to create dynamic scenarios that are easy to install and make. The best mods will be promoted in-game, and mods will be listed in the same way the other game modes are, for easy access. 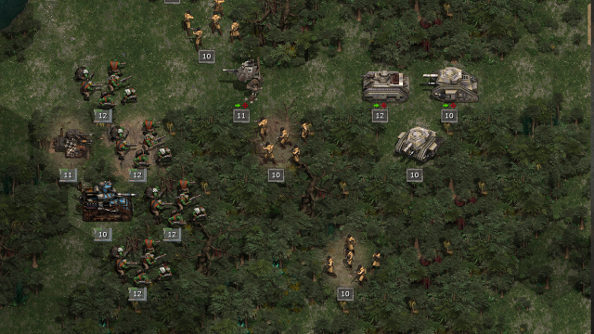 “This is really just the beginning,” says Shargin. “Armageddon is not going to be just a simple game that we release and forget about. We have already planned how this series is going to develop over the next couple of years. After the initial release which will cover the Second War for Armageddon between the humans and the orks, there will be a major expansion covering the Third War. This war will be covered from the ork’s perspectives.”

Flashback is also planning DLC, adding new locations in Armageddon and even a separate add-on focusing on the Titans facing the orkish Gargants, which sounds like quite the titanic clash.

The waaagh begins in autumn this year. So polish your armour and slap an alien around in preparation.